My fiancee and I just moved back to the Portland area. Hooray!

Now we're looking to get some cash to put down on a new place to live, so we can stop hogging space on my friend's basement floor :D

What does this have to do with selling hair? Well, for one, we have a need for money, so we want to SELL the hair, not donate it. We're looking for wig makers, doll makers, hair fetishists, whoever would pay decent money for his hair.

There's about what looks like 18-20 inches of golden/coppery virgin hair, and we know we could sell it at a hair auction, but want to make sure we have a buyer before it gets cut.

I can provide photos of said hair, and meeting to show off his luxurious locks in person, is also an option. ;)

So DP, who wants to play with my fiancee's hair?

And no matter what he may say, payments in cheesecake, or delicious pastries, is not a valid form of financial exchange. 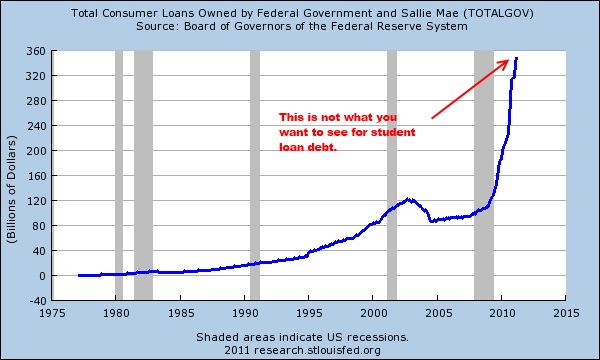 I don't think we need graphs and charts to illustrate this, but student loan debt is going way, way up. I have heard different figures. I actually heard a figure of over 1.2 trillion dollars, which is more than is in this chart. Of course, this chart is two years old, and the higher figure might include such things as private loans, and also the interest on the loans.

Where does all this money go? I have a degree in Higher Education Policy, and I have NO IDEA.

Starting this January, I worked for two terms and the start of a third one as a community college instructor in a small Oregon town, in one of Oregon's smaller and poor community college districts. For my work, I was paid about 20-30 dollars an hour (the job was salary, not wages, and the amount of time that I was "working" is kind of hard to estimate). This is pretty nice, besides I was only working 6-12 hours a week, and there was no medical insurance or other benefits. So for a person with a Master's Degree, its not exactly a major haul. Of course, salaries in higher education vary across the state, but if you look at that chart and see how much student loan debt has gone up--- employee salaries have not been increasing at that rate. So where is all the money going? Not to us poor adjunct instructors working on a contract basis, and without health insurance or other benefits.

If I had to guess I would say it is going to:
1. Capital costs (look at how much PSU has built in the last decade)
2. Health insurance/pensions/interest payments/bonds/etc that don't stop from getting higher
3. There are a lot of people in higher education who are getting paid well: professors and administrators.

Hello all.
Its one of the fading days of summer and we know we are having our last delicious cool evenings to enjoy, without the scorching heat of summer or the rainyness of autumn.

Well, at least that is what I am doing here in Montana. Those of you in Portland feel free to complain about the weather.

Anyway, gonna drink some beers and inter teh net. Yell back at me!
Collapse