Are there any restaurants or cafes in (preferably in southeast) that allow you to bring in your own bottle of hard alcohol? I couldn't find any on Yelp or via the search function here. Thanks in advance.

I need some water-based cake makeup for my Halloween costume, like this type of thing. I know a couple of different brands make a similar product... Mehron, Ben Nye, etc. Is there a place in town I can get this stuff?

Best selection in town of those metal water bottles with pretty designs/art on them? There are quite a few at the New Seasons we go to but as that is a grocery store, I figure there's got to be a more specialized place with a broader selection somewhere around here. Right?

My friend has a not-quite-1-year old and is having daycare problems. She lives in Gresham, works near OHSU and is on swing (4-11) during the week and 6a-2p on weekends.

Today I found her in tears and she's thinking of quitting (a job she likes!) just to have "regular" hours that will match daycare. Anyone have leads on care for non-traditional times?

After two years, my parents will finally visit me from Florida TOMORROW! I get three nights and three days to show them the best of the best of the city. Don't care about price, I just want them to fall in love with the city. How do I narrow it down?!

PS: I don't mind snarking as long as I get helpful suggestions on food and activities people HAVE to see when they come here. They'll be staying near Pioneer Square.

This was on tonight, Comcast channel 302. 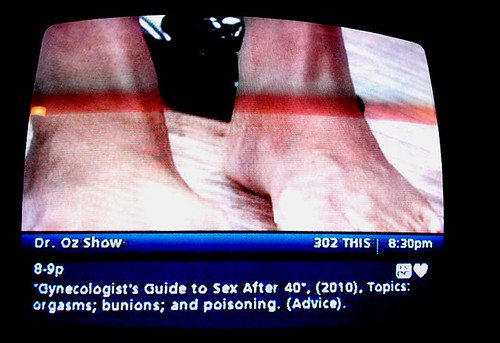 I'm trying to figure out why this required 8 cop cars, ~5 bike cops, and a police truck, plus blocking the I-5 offramp and Barbur and Capitol with cars and tape.

Portland Police Investigate Pedestrian Struck by Vehicle in SW
Portland Police Bureau - 09/23/10
This evening, Thursday September 23, 2010, at approximately 8:45 p.m., Portland Police Officers responded to the report of a pedestrian struck by a vehicle at Southwest Barbur Boulevard and Capital Highway. Officers arrived and found a subject lying in the street unconscious. Medical personnel responded to the scene and transported the subject to an area hospital where the subject is listed in critical condition. The driver of the vehicle that struck the pedestrian remained on scene and is cooperating with investigators.

The Portland Police Bureau's Major Crash Team is responding to continue the investigation and to determine factors leading to the accident.

Additional details will be released as they become available.

We were thinking about starting to buy our eggs locally, but I have no idea how to make that happen. Any suggestions? Is there an eggs and dairy equivalent of CSAs?

Alternatively, are there local stores which sell eggs right from the hens, so to speak?

I apologize in advance for sounding so incredibly clueless. I'm guessing maybe People's Food Co-op would be a good bet, but I've haven't been in there yet, and maybe it's just a vegan place? New Seasons is an obvious choice for cage-free eggs, but we're thinking more local.

Thanks, as always.
Collapse