I've got a (nonfunctional) DVD player to get rid of, and despite some Googling I'm having a little trouble working a couple things out.  I'd prefer, of course, to recycle it but am I *required* to do so by law?  Secondly, are there any places where I can do so for free?  The free Oregon E-Cycles program doesn't seem to include DVD players.  If I can't get it recycled for free, what sort of fee is typical?

I could so see something like this in Portland:

Thanks for the hike ideas. Angel's Rest is awesome... a fairly tough hike uphill, but SO worth it at the top. 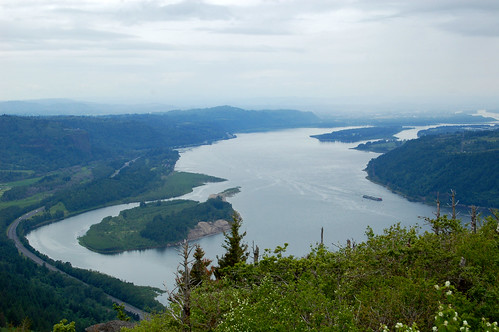 More pics in my journal.

So as I was winging my happy way to the coast this weekend, a small time cop-type in Reedsport tried to sully my happiness by a) pulling me over and b) giving me a ticket. DRAT. He said I was going 47mph in a 30mph zone - which I found hard to believe because at no time in town was I going faster than traffic around me. Whatever.

Anyway, I've never had a ticket in Oregon and my last (and only ticket) was six years ago in Washington. I've been told by various people that sometimes you can take a class and not have the ticket on your record. How would I go about figuring this out? I can't call the courthouse till Tuesday and want to figure this out sooner than later. Or what's the best way to fight/reduce/etc a ticket?!

Side note - effing small towns and their effing slow speeds!!!!!

Come to the corner of Kerby and Beech on Monday (5/31) from 12pm until 5pm for one hellofa sale!

Don't forget to check out the FREE box!

Most items $1 unless marked otherwise.

Hey, Oregon has the second-smartest drivers in the country.

Could have fooled me on the way home from the Gorge today.

My friends are getting married and would love to have an Eastern European dance troupe if possible. She was at a friend's wedding with a swing band and a swing group that performed and taught some basics as well, and they are wondering if there is anything similar in this area for any kind of Eastern European dancing - she is half Romanian. I figure it's a long shot, but can't hurt to ask!

i'm done with my coursework and will be receiving a degree in environmental studies. i've started my job search, but god damn! it's difficult. all of the jobs that sound interesting to me all require 3-5 years prior experience in addition to a environmentally-related degree.

craigslist doesn't offer a lot of postings similar to what i'm looking for, and i've looked on ecojobs.com, and similar sites as well as a lot of the wildlife, conservation sites, etc. the portland zoo isn't currently hiring any zoo keepers, but something like that would be of interest to me. but no environmental education. i'd rather work with animals than children.

any advice on where else to look? a way to filter searches for entry-level only environmental jobs? nature photographer would be an awesome job as well. i'm also open to work in various locations, as long as it's not too hot or humid (VA/MD/DC area as an exception), but the portland area is my number one.
Collapse