remember to change your clocks, my people. just saying.


in return for this helpful reminder, can someone please tell me where to find some cheap dentistry in portland? i've heard green apple is good, and they offer welcoming $19 exams, but their fillings cost somewhere around $185... am i wrong to think that's a little steep? discuss.

So, I'm in the market for some good ways to back up my hard drive and also to archive data in a sensible manner. Previously, a CD burner had been doing just fine for me, but I've recently gotten into audio recording. Now, I generate between 20-40 GB of sound files every time I go to a convention, and I'm just not going to get very far burning that to CDs. (I can, of course, compress that in various ways, and I suppose burn each 80 minutes to its own CD as an audio cd, but until I get better at sound editing I want to save my raw .WAV files too.)

Anyway, I'm looking for the following three kinds of things, which may overlap:

(a) An external hard drive enclosure to store large amounts of data on for immediate access.
(b) A way to make regular backups of everything on both that new enclosure and my main hard drive that's relatively painless so I'll actually do it regularly.
(c) A way to make an archive for each specific con on some kind of long-term storage medium so I can dig it out in 20 or 30 years when I remember I used to be into this and listen to it again. (I was thinking DVDs for this, but they aren't big enough unless I do several per con and may not have the storage life I want.)

Anyway, what kind of things should I buy and where should I go to buy them? I run linux and prefer to support local businesses when possible, particularly local businesses that'll talk me through various options in some sort of knowledgeable way.

I tried Craig's List on this and got a couple of bites but nothing real serious, so I thought I would throw this out there and see if any of you DPers are interested. I recently upgraded monitors and have a still in basically new condition Hanns-G 22" flat panel. It works real well. It came with a VGA cable, but I've swapped it out with a nice DVI one.

The monitor is this one complete with box and everything.

I'm Jewish, bar mitzvahed and everything, but for the last 20 years, I've been self described as "practicing, but not performing." or, "you know, jew-ISH."

But now I've got the kid (see icon), and while I'd like for him to make his own choices, I'd like to provide him with some sense of family history and tradition, similar to what my parents did for me. That means finding a community, a temple, etc. That's where y'all come in. It seems to me that a bunch of you are members of the tribe, and since I didn't live in PDX back when I was more "actively Jewish", I'm looking for recommendations on this subject.

I'd like something reform and mellow, but with some level of structure and authenticity. A place where holidays and traditions are celebrated as ways to bring people together, not push them apart. A place where they're kid-friendly and eventually, where my son could have his bar mitzvah, although that's a ways away.

My wife dug up Kol Shalom in some web research. Anyone here have any opinions about that place, or any others? SE (near Reed College) would be totally convenient, but for the right place, I'd dust off the wheels and burn some fossil fuels...

I need some help. Guessing a fair bunch of you live in group houses.

How do you deal with utilities? For the past two years I've been the only person paying bills in my house, which has translated to me playing Personal Bank.

Do you divvy up bills with other people in your household? How has this worked for you in the past? Is it a real pain in the butt when people move out of the house and you have to switch the person on the accounts?

I asked about this before, but didn't have a picture (and didn't get an answer), so I'll try again!

Does anyone know what this white "U" on an orange background means? I've seen it on buildings around town. 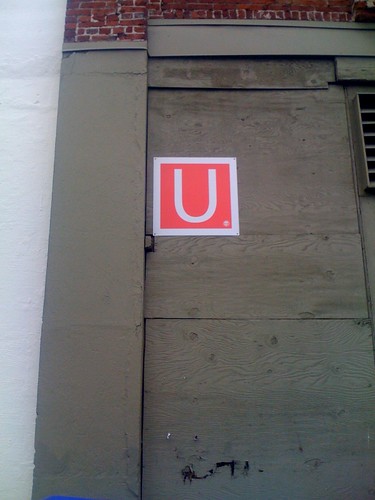 I'm thinking of building raised garden beds. I don't know how I can possibly stress "I have a building-things disability" enough. I am terrible at this sort of thing. My spouse has tools such as a power drill and the typical hammer, etc, so I'm hoping I will be able to do it once I figure out how.

Does anyone who has done it have any tips on how difficult it was for them to do, or what made it easier?

2) Does anybody know when the new Pine State Biscuits location on Alberta is going to open? Has it opened already?
Collapse