i like scarves. where can i find a good variety of them?

A while back, my high-top Converse Chuck Taylor All-Stars finally died. They were Converse originals from when I was in high school, not Nike-owned versions.

Last October-ish, I decided to purchase a new pair. I settled on some plain black low-tops, since I was always rolling down my high-tops anyway. Unfortunately, since Nike's ownership of Converse, half sizes had been out of production for a while. This is unfortunate because I wear a 6.5 in these shoes. 6s are too slender for my little duck feet and 7s are too long. I tried on both 6s and 7s and ultimately settled on the smaller 6s.

I realize this was a mistake.

I also just noticed that Nike is now producing half sizes again.

This, I guess, is where the request gets kind of odd. I've worn these shoes. They're used. They're not super used, but they're definitely not new anymore. I want a pair of 6.5s.

The thing is, I'm a poor student; I can't afford to just buy another pair of these shoes brand new.

So I was wondering if there was anyone out there that had a pair of 6.5s that they're finding too big, or if anyone had seen a nice used pair in a resale shop, or if someone would be interested in purchasing my moderately used Chuck's for half price, say, because you were going to buy another pair anyway and you happen to wear a 6?

I've greatly enjoyed a week here and sadly have to go home tomorrow. I've taken a ton of photos all around the area but before leaving I'd like to try to take a few of Portland as a whole (more or less). Back where I'm from, there's a spot up on a hill where everybody takes snapshots of the city from, is there someplace like that here?

I've been to the bar on the 30th floor of "big pink" and it was spectacular, but you could only see about half the city at a time from there. I've also been to the upper tram station and patios along the side of the main building at OHSU and the views from there were amazing as well, but mostly just of the towers on the South Waterfront.

Can anyone suggest such a photo spot? Bonus points if you can link to a picture from that spot, or provide a street address nearby (sadly, the stupid user interface of the GPS in my rental car doesn't allow one to directly input coordinates).

I have a banjo that I received as a birthday present several years ago, and unfortunately, much to my embarrassment, I have not found the time nor the inspiration to learn how to play it. Frankly, I don't think I have any music instrument 'chops.' As it was a gift, it doesn't seem right to sell it. Does anyone know of a good organization to donate an almost-new banjo? Surely there's someone out there who could benefit from it, rather than it (sadly) sitting unused in my apartment. Thanks in advance for any suggestions. 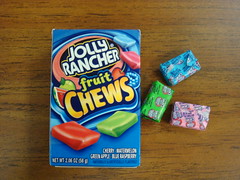 Any chance anyone has seen these "Jolly Rancher Fruit Chews" anywhere in town, and remembers seeing them and where?

We found some in an airport in another state. I looked at Freddies yesterday and didnt see them anywhere. Figured it's worth a shot to ask...

yes, I realize I can order enormous quantities online, but they weren't spectacular enough to want so many boxes ;)

So last night my fiancé washed his phone in his pants. Now all it does is vibrate and has a white screen when you turn it on. Does anyone have a Verizon Alias (u740) they want to sell me for $20 or so? Or do you have a QWERTY phone that is Verizon compatible?
Thanks

I know many of you already frequent Groupon, but don't forget to check out the side deals! Today it is Pixie Project, an amazing organization that I volunteer for. They streamline adoptable cats and dogs out of the shelter system and into homes. If you go there for a pet, you know you're going to get one that has been socialized and trained. They also provide a link to low cost spays and neuters to people who cannot afford them. They are self-sustaining through their pet supply retail store, which their groupon is good for. $30 for $60 worth of toys, treats, collars, etc (everything but bagged food). They sell the basics there too, like kitty litter. Please support them as they do wonderful work!

My grandmother passed away in November. Up until then, she had been in the nursing home, with her son acting as power of attorney, and he handled her estate. He passed away last March. His wife is now handling everything. In December, she told us that my grandmother’s lawyer told my aunt that my grandmother had taken out a life insurance policy that specifically named her son, her daughter (my other aunt, who also passed away recently), and my brother and I as beneficiaries. My aunt in law told us that the insurance company needed the death certs for all involved in order to release the funds, as well as proof of ID for my brother and I. To this day, she hasn’t provided us with the documents to sign and send in, and has been unwilling to talk with us any further about it, accusing us of not trusting her (‘cause we don’t).

I just want to contact the lawyer and the insurance company and take care of it myself, but I can’t get the information from my aunt.

Is there any way at all to go around her to get this information? Any kind of association or database that can link my grandmother’s name/estate to that of a lawyer? Would I need to contact a lawyer myself to procure this information?

What power might I have here when repeated attempts to get the info have failed?

Thank you so much in advance. :)

I'm trying to find places near the Portland area that offer (guided) horseback trail rides for groups of people, some very beginners.  I've been doing google search after google search and not finding much but I figure that they have to be out there.  I'm looking for somewhere anywhere as far out as an hour drive.  North Plains or Gresham or Oregon City or Wilsonville would be fine.

So DP, anyone have any suggestions?

Thanks!
Can anyone recommend a place around town to get a bike frame sandblasted?

I just trimmed my terrarium and cut out a grocery store bag worth of philodendron clippings. There are plenty of air roots, which makes it easy to plant them. All you need to do is plant them in potting soil and keep well watered until the roots take.

And bought the wrong printer ink. FOr an HP Officejet.

my loss is your gain.

does anyone know why an American flag would be flying at half mast today?  as i was driving on 26W towards Hillsboro this afternoon i noticed one.....and can't seem to find out why?  any ideas?
Collapse