anyone else see BRMC at the Wonder Ballroom last night?

I'm currently house sitting in SE (31st and Hawyhorne) and am not familar with the area at all! I forgot to get his wireless network password and am in dire need of wi fi for homework.... Anyone know of any place close with free wi fi where I could hang for a couple hours a night?

And while I'm here... Any places you'd recommend I check out in the area over the next two weeks?

My friend's company ShopIgniter just got some venture funding and is hiring!

ShopIgniter seeks a full-time, front-end web developer with a solid understanding of standards-compliant (X)HTML/CSS with the ability to quickly slice up and implement designs created in Photoshop or Illustrator. General knowledge of Adobe software is a must. Experience working with dynamically-driven content and manipulating the DOM with jQuery or javascript is a plus. An eye for aesthetics and design is appreciated.

( Collapse )
Other positions are listed on the company website.

i just upgraded my hard drive and memory in my macbook and have a (fried) hard drive to recycle and two 512 so-dimm ram cards to donate. where in southeast can i take these items to be properly dealt with? (if anyone happens to want the ram, it works perfectly, i just wanted more oomph after two years.)

Are you a telecommuter that needs to get out of the house?

Since we had so much interest last week,

ivynova and I will be doing some co-working again this week from Satellite Cafe (located at SE 20th and Hawthorne). We'll be there at 9am this Thursday and stay until probably sometime around lunchtime.

Show up whenever and grab some food, coffee and meet new people. It'll be sweet.

Also here, have a picture of the Hubble. Related cause it's a satellite: 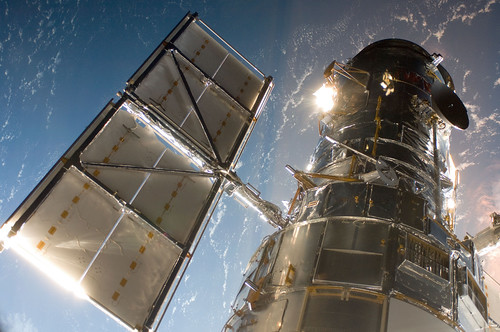 I am movingout of my apartment this week and feel that my apartment would benefit better from someone else cleaning it then me... The rpoblem I have is that I have not the foggiest where to look, who to call or how much to figure it would be.
Any advice, tips or people you know (or you) would be great.

Today I am putting in vacation time for late April for a trip to Portland. I'd like to see if it's a good place for me to relocate to...
I currently live in Maine, and I've been here long enough to need a change.

I did see there was a wonderful list of places to visit and some great suggestions from you a few posts back (I've bookmarked and mentally filed it). However, I do want to get serious about the job hunt and relocation.  So I ask you all:

Phenylepherine does nothing for me. My last trip north to buy the real stuff was by bike, sick as a dog, in the rain. This time, I leveled up and researched C-tran, Clark County's transit system, which shoots some tendrils down into Portland.

I'm near downtown, so the nearest source for me was the Walgreens at 2521 Main Street in Vancouver. I tested two routes, one up and one back.

(1) Ride the yellow line Max up to the Delta Park/Vanport transit center. The C-tran #4 route picks up/drops off right there. The fare is $1.50 for adults. This bus runs every 15 minutes for most of the day, seven days a week. It goes farther up Broadway than the 105—my driver actually called out the stop as "Walgreens." The stop is at 25th and Broadway. You'll know you've just missed it if the bus turns right off of Broadway.
(ETA: C-tran #4 stops at Jantzen, too)

(2) The #105 is an express route that picks up along the bus mall downtown and shoots straight up to downtown Vancouver on I-5. It costs $3 each way for adults. It runs weekdays throughout the day, but not terribly frequently. Get off/on at 15th and Broadway. The Walgreens is on Broadway, east side of the street, about eight blocks uphill. The express buses are a little more posh than the regular ones, with thicker padding and reclining seats.

Everywhere in Washington that I know of keeps the stuff behind the pharmacist's counter. Just go up and ask. Both times I've been to this Walgreens, the pharmacy staff has been friendly and chatty and did not care one bit that I wasn't a Washington resident. They will need your ID and signature, though, and not just for the sales tax waiver.


BONUS POINTS:
You get bonus points by being interviewed by KOIN 6 News about the fact that Walgreens now has Oxycontin in time-delay safes. I'm the guy in the brown corduroy jacket in tonight's newscast. They shot some filler footage of me at the pharmacy counter making my purchase. They DID NOT indicate in the newscast that I was buying a big 96-count box of pseudoephedrine and then booking it across the border. Really, it was all I could do not to bust up laughing.


ETA: If anyone knows of a place one can go in Portland to get a cheap/free prescription for pseudoephedrine, please comment. That'd be damned useful information.

I'm looking for 2 controllers, a game or two.
new not used/refurb.

A lot of places I've looked at only have PS3 bundles on backorder. HALP.

Today I had an experience I'd never had before--I was on a Yellow Line train headed downtown, and the train switched over to being a Blue Line train headed toward Gresham. There was no announcement from the driver or anything! A number of us were forced to get off at the next stop, catch the next Blue Line train in the opposite direction , and then wait for the next Yellow Line that was actually headed downtown. How often do trains usually switch colors/lines? Have you ever had the experience of this happening without the driver announcing it? How annoying!
Collapse