My friend (let's call her Penny) and I are having an odd, unbearable roommate problem - and will accept any suggestions with open arms.

So as it stands now, we have a cleanly, yet psychotically uncooperative roommate who is making our home a very unpleasant and unnecessarily dramatic environment. We are going to speak to the landlord, though we doubt there's much he can do. Any suggestions?
I am having a Valentine's Day Sale this Saturday; chocolates, flowers, jewelry and other gifts. It's all handmade/done by local crafters/artisans, so if you are in need of a gift for your SO, or just feel like buying some really great flowers/jewelry or a box of chocolates and sitting on the couch and eating them all yourself, then swing on by from 11-5: 2565 NE 33rd Avenue, just across from Grant Park. Plus this can save your ass if you're one of those last-minutey people.

Participants are:
http://www.missionarychocolates.com/ ooh, they're vegan!

Blossoms Floral
Amy Hekker
Linda Brown
My neighbor parks his 2010 Jeep in front of my house every single day of the year.  I know this is commonplace in most dense areas of the city, but I live out a ways where everyone has a driveway and a garage, in fact this particular neighbor has two driveways and two garages that will accommodate three cars.  The residents are a nuclear family of four people each with their own pickup or van.  None of them use either of their garages.  One driveway is devoted to one truck, and the other driveway accommodates another truck and a van, but my road frontage is devoted to a big oppressive black Jeep with a "right to bear arms" sticker on it.  I fully support the second amendment, mind you, but rubbing it in peoples' faces is just obnoxious. I used to consider them nice people but now they're just starting to seem like space hogs.  At what point does this become considered a nuisance?  I really wouldn't care if it weren't for the fact that my picture window faces directly into his truck.

I left out the fact that the truck parked in front of my house every day is owned by a 22 year-old punk kid who has shouting contests in his yard at 3 am when his parents leave town.  I've been friendly with them for many years and have known them since the boy was born.  (Yes, I also live in my Mom's house that I have since bought.  My Mom has long since moved away.)  I haven't spoken to the kid for many years, but I occasionally talk to his parents when I'm doing yard work.

I'm really not interested in confronting either resident out of concern that I may incite a Hatfield vs. McCoy scenario.  I believe that a confrontation of any sort could potentially create such a scenario.  Many of you have advised me in this thread that it is a friendly request to ask him to park elsewhere, but I personally don't feel that it would be friendly in any way.  I have no problem approaching people and speaking my mind.  I have been known to start fights over people cutting in front of me in line, but this problem just hits little to close to home (no pun intended) for such a brash reaction.  If I am going to approach any of these people about this problem I need to know my rights and potentially the rights of the 100 or so school children who are forced to walk around his car into traffic every day.

This brilliant individual has restored my faith in DP and has reassured me that you are not all choosing to participate in the internet hate machine.

Edit 3: I guess I should assume I won't get any helpful information out of DP if I incite a political discussion even though it really wasn't my intention… I assumed everyone would agree about the obnoxious disposition of my neighbor.  Besides the two helpful responses I received, everything else has been in regards to some apparent battle of wits or some other political quarrel.  I really want to have a sound argument if I am going to approach them.  Instead of offering suggestions to support my argument, everyone went off on some rant about me being some kind of "pussy" [sic] who is afraid to talk to his neighbors.  If they had read the fuckin' post they'd understand at least that.  The internet is so prejudicial and assumptive especially when mob mentality comes into play.

Edit 4:  I realize that I later added a lot of information to my original post which has come across as a ploy to make my argument more "valid" [sic], but really I left out a lot of valid points because I hastily posted originally under the assumption that DP was actually a constructive, helpful venue and not the hive-minded mob you have all made yourselves out to be.

Cheaper Tetanus and TB shots.... Where??

**Update**
Called the Multnomah County Health Department and they helped. Thanks for all the suggestions!!

I found a study that will pay $100 dollars ($50 for each visit)to smokers in their 20s-30s. 18+specifically with high school education. No more than 1-2 years of higher education. The flyer says volunteers are sought for a research study comparing brain function in non-drug users to people who use methamphetamine. Participants must have no current or past mental health diagnosis or treatment, including substance abuse. The study involves an MRI and tests of memory,concentration, and problem solving.

I'll forward the number to anyone that is interested.

So I'm applying to be a vendor at the Crafty Wonderland Super Colossal Spring Sale. It's May 1st + 2nd from 11am-5pm both days at the Oregon Convention Center. It's all ages and free admission. They used to do the craft sales every month at the Doug Fir and now it's twice a year (Dec/May) and much bigger.

Any other crafty folks interested in sharing a table with me? I make barrettes, headbands, and brooches with wool felt, vintage buttons and free-form embroidery.  It costs $150 to rent a booth space - 5' deep x 10' wide.  There can be two vendors per booth.  I've never done it before but I'd like to start selling my stuff more places.  I'll even sit at the table both days and sell your stuff for you.  Application are due Monday Feb 15th and both applicants need to apply at the same time. There's more details here: www.craftywonderland.com/apply.htm.

Have any of you developed allergies in your late twenties?
I have spent the past two weeks breaking out in full body hives 30min-2hrs after most meals. I THINK I have narrowed it to dairy and so am going to cut it out of my diet for a week (oh god help me) to see if the hives stop. If not, back to square one. I don't have insurance, but I see zoomcare offers allergy care. Before I go to a doctor though I'm trying to do the things I know they'll tell me to do (food diary, cutting out various common allergens, taking antihistamines). I'm taking Zyrtec whenever I break out but I might begin taking it regularly.
I have pretty much ruled out contact allergies as I switched to hypo allergenic everything (soap, detergent, shampoo, etc) and it always happens after I eat.

HOW DO I LIVE WITHOUT DAIRY?

So, a couple of weeks ago, I posted that I was cleaning out my craft room and was offering, free, some items. I thought I had a taker but I have not heard back, so I am extending my offer again.
I have, to anyone who wants them, at no charge: Stamps, ink pads (30 colors in a nice caddy), paper and punches.

If anyone wants them, please let me know and I will gladly let you have them. You can reply to my e-mail address: Misshaddassah1@hotmail.com

EDIT: The items are now gone. When I do another purge, I will let you all know.

i want to get into tennis. where should i start? reading wikipedia right now. have any useful tips? ANYTHING?

Does anyone know anything about pet deposits for companion pets? if I have a note from my doctor recommanding a companion pet for my medical condition does that mean I still have to pay a deposit? Thanks for any info.

In case you were wondering where it slithered off to.. 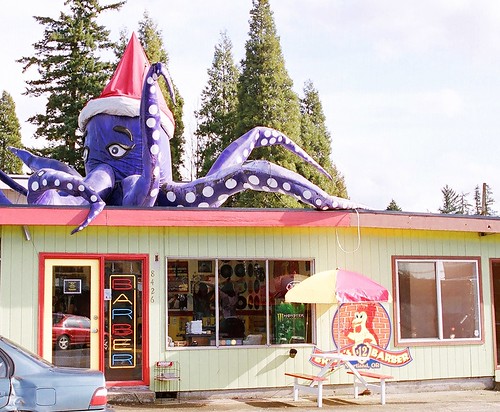 It's a barber shop called Brick's in the Burlingame area.