I wish someone would scratch my back right now.

bjenright and I went out for a late night shoot and I thought I'd share some of the results to any who appreciates photography.
( Collapse )

since you guys were so willing to share your SAT scores...

any of you taken the MMPI? id be interested to know what all you damned crazies got on that ;)

What's the best way to buy a bottle of liquor and send it to my dad in another state? Have any of you done this before? Would it be best to purchase through a website and have it mailed there? Or can I buy a bottle here and mail it? (Or do they even allow you to send spirits via USPS?)

Everyone's always asking for restaurant recommendations, so I thought it appropriate to point out that one of my review lists is on the front page of Yelp Portland (http://www.yelp.com/portland) today. My list is titled "Culinary Adventures" and likely represents the first 5 minutes of my 15 minutes of e-fame.

Imagine it... Sly Stalone, Jason Statham, Jet Li, Dolph Lundgren, Eric Roberts, Randy Couture, Steve Austin.. oh wait I'm not done yet... Micky Rourke, Bruce Willis, Arnold Schwarzenegger, Brittany Murphy and Charisma Carpenter (aka that other girl from Buffy),
all together in one awesome movie! I thought it couldn't be true... until...

So, I got these two things as gifts.

They are really awesome gifts, but I have $19 until the new year, so I'm not going to be able to utilize them.

Because of their nature, they cannot be bartered. Therefore, I am giving them away to whomever wants to come get them. 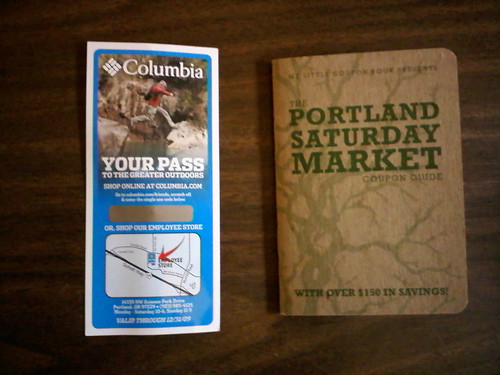 One is a pass to the Columbia employee store. Apparently, this is a really amazing thing. I would love to go, but it seems like a waste to use it on myself when I won't be able to buy anything. Please only comment with your desire to claim it if you can utilize it. I think that's only fair. It expires on New Year's Day. ALSO GONE!

The other is a coupon book for Saturday Market. These coupons all expire on 12/24. You could use them this weekend and get some nice gifts. There's all kinds of stuff in here. There's so many coupons, I doubt one person could use them all, so think about splitting them up among friends. GONE!

While I drive, I am lazy and all I want to do is paint some stuff. Therefore, if you want either of these, you should also want to drive to close-in NE to get them.

...my favorite time to avoid all retail outlets by the widest margin possible. And yet I have been given the task of finding a store that sells gloves that are sized in numbers (like, size 5,6,7, as compared to small, medium, large).
I imagine a place like Macy's (and other stores that are basically the same with a different name) probably has numerically-sized gloves. I'd really rather not go to Macy's (etc.) though, especially since they're usually inside/attached to malls. Any suggestions of the least ridiculously-crowded-and-annoying place I could possibly go to fulfill my mission? I live in outer SE (not far from clackamas), work in outer eastside NE and also at Gresham station, so proximity to any of those places is a bonus. Price is not an issue.
Thanks!

So I've sprung for a DSLR. Bought it off the interwebs, but knowing me, this is just the start of a long string of obsessive behaviors surrounding gear to get that perfect picture.

I'm looking for something like that here in SE PDX. Not a Ritz-chain-esque store, but some place where the employees have names, they recognize you when you come in, and they'll put up with regular visits which result in semi-regular gear purchases from a loyal customer. I bought the camera off the webs, as I say, but moving forward, I'd rather deal with people.

Any of you photogs have a favorite place? Close to Reed College is best, but for an awesome place, I'll travel.

Basically, I'm looking for the camera shop equivalent of a bar or a barber shop...

I'll be heading to Spokane in April for a conference, and am wondering what there is to do in the downtown area - the conference is at the schwanky Davenport Hotel.

I think this site is new. It just sort of animates the text you type in. But it is cracking me up... this one was very Hipster.

its pretty close to christmas and i've been to cheap to get a christmas tree, but if any of you know where i can get a black christmas tree then i might just have to buy it.

So my question is, has any of you seen one in stores at all?
Collapse