Is it too late for Chestnuts? I've been hoping I could forage for some around P-town but I've heard chestnut season may have passed me by. Anyone seen any chestnuts on the ground lately?
at this price I do anyways:

I am looking for stores with good selections of postcards. I don't want the generic, touristy kind of stuff - I'm looking more for interesting art and quirky, funny stuff. Close-in would be better for me, but if there is an awesome shop further out, I'd be willing to make the trek.

Thanks!
Can anyone recommend an excellent therapist? I don't care about price as much as about quality. Preferably east side.

I seem to have a problem finding someone who is well educated in psychology as well as philosophy. I'm looking to debate/discuss some really important psychological issues that pertain to me. I'm not depressed, lonely, grieving, etc etc... just looking for someone to delve into my mind with me so I can reveal myself to me a little better. Reading Kierkegaard only gets me so far!

Pair of Liz Claiborne ladies' glasses found at 5th and SW Stark at approximately 10:45 this morning.

Please describe them if you lost them - they were in the middle of the street, but appear to be undamaged. I have them at my office.

EDIT: He came home this morning, safe and sound. Apparently he was surprised that so many people were worried about him. Definitely wasn't a publicity stunt, as a couple of you thought. Just a happy ending. :)

If you see this guy, tell him a lot of people are terribly worried about him. I don't know him personally, but I have good friends that do, and some parts of his letter really resonated with me. 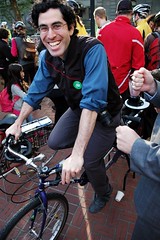 Friends of Southeast Portland resident Aaron Tarfman are concerned tonight because he has not returned home for over 24 hours and he has written a poignant “Farewell Letter” on his personal website.

Read the rest of the article

Hey, peeps, we're offering some groovy cupcake discounts in exchange for food donations to help a few east Portland elementary schools. Details here.
( Collapse )
Thanks! Back to your normally-scheduled programming!

Hey, plan on extra time for your evening commute, apparently max is having a mechanical per the note on the top of their webpage

I didn't comment on this before, since I didn't want to endanger any pending hearings.

pilarcruz's place, cuz she's cool and stuff and recovering from surgery. I parked my car very carefully on NW 22nd between Johnson and Kearney, making sure I didn't park too far from the curb or block the driveway. I noticed the signs said "NO PARKING - 8 am - 5 pm", and figured it was OK to park there - it was around 7 pm.

When I came back, the car was gone - the police had it towed, and towed by the wondrous Retriever Towing. More here and here.

It cost me $153 to retrieve the car, plus another $60 to challenge the parking ticket and request a court date. When I got back home, I called the officer's cell phone, and I asked him if he had any pictures of the car "blocking the driveway", which is what they claimed. He said, "I don't have to take any pictures."

The hearings officer said that since there was equally compelling evidence either way, he would invalidate the tow, and that one picture was particularly compelling.

So, as they say on the Internet, "Pictures or it didn't happen."

To Write Love on Her Arms is a non-profit movement dedicated to presenting hope and finding help for people struggling with depression, anxiety, addiction, self-injury and suicide. TWLOHA exists to encourage, inform, inspire and also to invest directly into treatment and recovery.

I first heard about this movement/organization years ago when it began in Orlando at an Anberlin show. I had no idea it would come to affect me very, deeply personally.

Tomorrow, write love on your arms
I need a haircut, but I am totally inept at articulating and often even having a general idea of what looks good on me. I'm sick of having frumpy hair.
Where can I go to ask for a fabulous hair cut and get one with little to no follow up questions involved? Basic cut, no dye or anything extra.

I'm in SW, but anything within like a 45 minute bus ride is cool. I'm hoping to pay something in the $30-40 range, but if paying extra means extra awesome hair I'm very much open to the idea. Super duper bonus points if they're open Sundays aka my only day off, but I can swing later afternoon appointments during the week too.

OK, what happened to the sexy aerobics video link? I couldn't watch it at work, so I've been waiting all day to come home and see it. Now... it's gone?!? say it ain't so...

I'm trying to find where I can get a box of good-quality chocolate bars. Something like Toblerone, Ghiradelli, or Guittard - something on-par with these would be preferred.

It's for door prizes for a baby shower, and I a) don't want the cheap vending-machine grade stuff, and b) I'm trying to find a bulk discount 'cause I need 30 of them (Trader Joe's had some of their brand, but sold them at their unit price of $2.19 EA, ouch). If I can keep it to about $1 / bar, that would be awesome, but I'm feeling I may be kidding myself. :/

Any ideas where I can go? Costco didn't have anything, and neither did Cash N' Carry. Have I simply run out of options?

I have several years of comic books hanging around. Upon receiving them, I went into OCD librarian mode, bagging and boarding them.

There's no reason for this. I did it, because that is what you do with comic books. BAH! I want to free them from the cardboard oubliette that they've been relegated to. I want to give them life and meaning.

Hell: Maybe someone could... read them?

being on the cover of the Willy Week is ( Collapse )