Like Tuscan Milk. One gallon of milk for the low, low price of $69.99+shipping.

Be sure to read the reviews.

ok people, please dont talk on your cell phone while in a bathroom stall. no one wants to talk to you while you pee or poo. and no one in there trying to do their own bodily functioning wants to listen to your conversation during their efforts. thanks

Here is the question that is plaguing my life...

How the hell do you clean cat fur off of white porcelain surfaces? Everything I try seems to just want to push it around, because the fur just wants to stick down with surface tension. Is there some kind of magical trick I don't know about?
Just posted on KGW:


After yesterday's third circle of hell weather, I needed that laugh.

Ever wonder what happened to the salmon in Salmon Creek?

Become a Stream Steward!
The Stream Stewards Program is a free learn-n-serve program of Clark Public Utilities' StreamTeam. Commit to 45 hours of hands-on, professional level workshops on the following:

The Stream Stewards Program is free of charge for Clark County residents. Stewards pay back their tuition through 45 hours of volunteer time with the StreamTeam or one of our partners. Stream Stewards also enjoy continuing education opportunities and social events with other like minded individuals!

Stream Stewards come from all age groups and backgrounds. Stewards are interested in building their skill set and putting their new knowledge into action!

Apparently these "glow in the dark" clouds on the edge of space are being seen in our area. They are normally not seen below 50 degrees north latitude. Global warming is apparently the cause (and probably the reason we've been shoved into an oven for the past week). The Kos article has a picture of them over Portland. Did anyone see these? I'm going to keep an eye out.

A couple days ago, Oregon's governor signed House Bill 2377, which prohibits the driver of a motor vehicle from using a cell phone unless a hands-free accessory, which permits both of the driver's hands to remain on the steering wheel, is also being used.

This is an upgrade of the current law, which applies to drivers 18 and younger, and doesn't include an exception for a hands-free accessory. Also, the violation under the current law is a secondary offense, meaning an officer can only issue a citation if the driver is pulled over for a separate suspected offense. Under the new law, it'll be a primary offense. The maximum fine under the current and new versions is the same: $90.

I'm all for this type of law, but this one has problems:
The second case is likely inadvertent, but in practice it's going to be a hassle. Cops seeing drivers looking at their phones will ticket them, regardless whether they're texting or talking or not, because the new law says so.

Anyhoo, just my thoughts. Interested in what DPers think.

(x-posted from my journal)

WHO:        Beatnik Betty (me), the newest Oracle of Oregon!
WHAT:      Tarot Card Readings for $10 a pop, and some spiritual books for sale.
WHERE:   Radio Room Art Square, 'Last Thursday event', 1101 NE Alberta
WHEN:      Today, 5pm-10pm, or until the heat kills us all.
WHY:         Because I'm new to PDX and want to meet you all. What better way than to read your cards for you....
Read this blog-article written by a blogger team (http://thesegentlemen.blogspot.com/) back in the DC area before I left town, and gave some of my final Tarot card readings to friends and strangers....
http://enlightened77.livejournal.com/929792.html

Yo, I heard there's a demolition derby in the area this weekend, anyone got any more info before I drive my 77 LTD backward into a station wagon's radiator?

How do you know which recycling center will take what bottles & cans? I only ever had a few at one time, but the center near me only took maybe a third of those.

overheard in a local air conditioned coffee shop with a kids play area, a conversation between a dad and his daughter.

the 4-5 year old girl walks in and complains to dad that there's nothing to play with. dad says, well there's a couple of pirates behind you.

dad : "maybe she was kidnapped by pirates and then she pushed the captain overboard and she took over."

has anyone noticed the dazed faces of fellow travelers on their commutes? i swear, traffic is nutty with all these sleepless, muddled people behind the wheel, myself included.

i'm comforting myself with the notion that lovely pacific northwest autumn is around the corner and so i ask you: what are your favorite cool weather memories and/or favorite things about the weather turning cooler? let's summon them en masse and maybe keep the heat cranking on down.

for me, it's the first time i pull on my o'yummies (sock dreams for the win!!) and shuffle around the house feeling toesty.

I need to do the 60k mile thingy on my car--chiefly replacing the timing belt--so I called the Hawthorne Clinic that people on here have said nice things about. They quoted me around $950 just for the timing belt, which seems really high.

Is this way high?
Who else can I call?

I'm about to hang out with some friends in a bit.

We're all clueless on where to go.

Have any recommendations? portland or beaverton is fine. we're living in beaverton tho

Oh my goodness, is this oppresive heat wave over? I'm bored at work (with our awesomely tempermental A/C clicking on and off all over the place, so nice....NOT). Entertain me with pictures of how you've dealt with, are dealing with the heat wave. I'll start!! 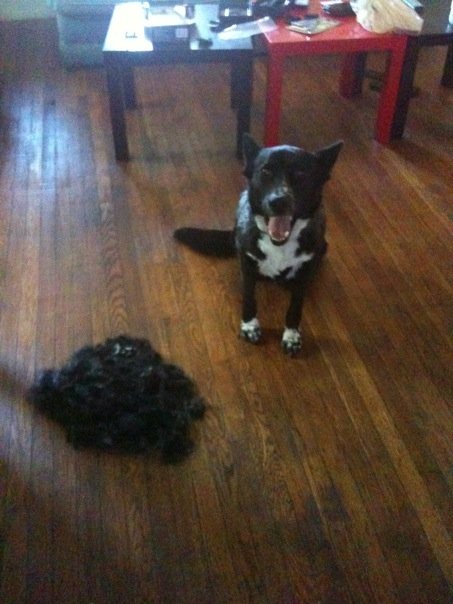 I dealt with my dog's incessant panting by buying a hair trimmer and shaving him as much as possible without making him bald. While I still giggle when I see him, he's much more comfy.

I dunno 'bout you, but when it's hot like this, I like dancing to crazy gypsy music for a low low price. Because sweating + dancing = win.

But what? You want something a bit more mellow and beautiful prior to something so crazy? Well, fear not! The opener, Miss Ashia Grzesik and her cello shall provide excellent Eastern European mellower music.

I can't figure out why people do this so maybe you guys can help.

The other day I was walking into the bathroom at an enclosed retail compund when a gentleman came in a few minutes after I did. He walked over to the sink and washed his hands and then he made his way to the urinal to do his thing. After he was finished, he washed his hands again and left.

I can understand washing your hands AFTER you use the restroom, but BEFORE you do and afterwards? Did I miss a memo somewheres?

Can anybody suggest a decently-priced place around here where I would be able to locate a replacement faceplate for an Alpine car cd player? Should I just give up and go to Cartoys or something?

I was wondering how long this would take. Thought? Comments? I'm sad my fiance will have to either start buying them illegally or start smoking again... :(

I am heading down to Eugene tomorrow to spend some time at Faerie Worlds. I will be coming back tomorrow night as well. THat is a lot of driving alone so I thought I would see if anyone was interested in carpooling. So.. DamnPortlanders. Are any of you wanting to go to this event

Does anyone know of a shop in town where one could buy cloth menstrual pads? I find myself unexpectedly in need of some extras, but I'm going on vacation in a couple of days and don't have time to order online like I usually do.

Remember reading recently about that gay couple in Salt Lake City who made the mistake of kissing in a plaza that had been public, but was recently ceded to the Mormon church by the city? Private security hassled them, then handcuffed the two offenders. Then they got charged with trespassing.

Well, here's the video, courtesy of a Dan Savage post in the Portland Mercury. In response, there's going to be a large number (24 so far) of Kiss-In Protests in cities nationwide on Saturday, August 15th. at 2pm. Here's the info for Portland:

Everyone is welcome and encouraged to attend! Bring your husband, wife, partner, bf, gf, intern, friends and neighbors, etc... Twitter this info to your friends!

Seriously, how Portland is this? Kissing as a form of political action!

I'm sure this has been posted, but just in case it hasn't:

Take a look at the featured article on Wikipedia today.

What the hell is in this building? It says "1400" outside of it, on Yamhill. The Tiffany Center is right behind it.

It's an empty little shop facade, but it seems like there's someone living in it. Last time I rode Max by it there were uh, branches tied over the front door, among other pseudo-weird things.

What is it? Does anyone know?

Is it just me or did anyone else have crazy allergies yesterday but felt fine today? I was sneezing, stuffed up, runny nose, all day yesterday, and it was the worst I felt like I've had hit me in years. I couldn't get away from it, indoors or outside, in air conditioning or in the heat.

Today my sinuses are happy as a clam.