For whoever is awake, I'm looking for a cheap Sunday brunch in SE or NE. I'm at 15th and Madison, so walkability (apparently not a word) is nice. I'm a vegetarian, so any place that specializes in that is def a plus.  I'm considering the all you can eat brunch at Sweet Pea bakery, so if anyone recommends that, or not, let me know! Thanks!

Does anyone know why modern English has come to rely so much on helping verbs? Is there something tangible to point at that indicates why we say, "What are you eating?" rather than "What eat you?" or "How does that smell?" rather than "How smells that?"

I took German, and I can't think of a single example of me ever using a helping verb while speaking or writing it. If there is, it would be scarce. Are there any other languages that utilize them as much as English, if at all?

Portland-related because we're all interested in the history of English grammar.

I have this song stuck in my head but can't remember the name of it...
can you plz help

Okay. Who else has insufficient RAM when they dream?

You know what I'm talking about. You're walking around with 5 friends in a dream and one of them disappears. You were in Minneapolis but suddenly, it's Seattle. You find that your eyes are forced shut, or you feel so tired that you can only crawl. But not just all those superficial details; there's that accompanying telltale feeling of lag. Things slow down and there's a sense of confusion, like "wait, wasn't it ___ before?", but then your brain quickly shoves the concern aside and replaces the inconsistency like a glitch in the Matrix. Like you can't keep track of all the details so they keep morphing and you somehow can't find any lucidity.

Give me your best insufficient RAM dreams.

Last night I was riding on the back of a motorcycle. First there were 6 people in our group. Then 5. Then 4. (When my brain realized there were only 2 motorcycles.) Then, the motorcycles became a kind of jetpack. So I was clinging to a guy while strapped to the jetpack. Then I had the Rocketeer-styled throttle button in my hand and I pressed it. I couldn't open my eyes but I knew we were going really fast. I really wanted to see but I couldn't. I WAS GIPPED OUT OF MY JETPACK DREAM, YOU GUYS.

Tonight, one of my favorite bars in town, the Sapphire Hotel on SE 50th and Hawthorne, is helping me out with a fundraising/promotional event for the film I am shooting this fall, "Widow's Walk Lake". Its a spooky children's film set in the 1930s inspired by the children's books by John Bellairs.

Apparently...summers were depressing for him, which I feel is the summation of many whiny Oregonians complaining about the heat. So next time you're sitting around, wallowing in your sorrow over not having air conditioning, give this a little play:)

I'm looking for recs on good places in town to take pictures of the sunset. Bonus points for locations that are otherwise scenic as well.

Anybody else here old enough to remember this souvenir of Trojan nuclear power plant? They used to give these to visiting grade-school students and other visitors... 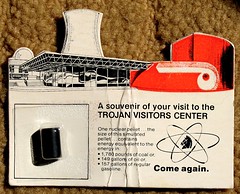 Where can I buy a web domain, that is NOT Go- Daddy.com? I do not need hosting or any other extras, and I want them to notify me before they charge me each year.

does anyone know where i might be able to find sea sponges like the ones sold by gladrags? i've already checked people's coop and food front, but no luck.

So my dog started barking out the window, and when he wouldn't shut up, I looked outside.  There was a woman standing there with a wagon with a kid sitting in it, and their dog sitting next to them, waiting for someone.  And waiting, and waiting.  My dog was going crazy, and I came this close to walking outside and asking them to go somewhere else when a girl carrying an even smaller girl walked up, and I thought, OK, fine, they're about to leave.

But no, they didn't.  My dog got to get more and more annoyed at another dog hanging out on his turf, and just as I thought, "Now I'll go ask them to leave", it turned out that the smaller girl needed to pee.  So they hiked up her dress and held her hands (she had a cast on one leg, so I guess she couldn't do it herself), and held her.

OK, I thought, this is weird, but it'll be over soon, so I'll just let it be.

But my dog continued to woof, since the people weren't leaving, and so I looked again, and the little girl was still being suspended, bottomless, over my lawn.  It'd been several minutes, so I decided it was time to do something.  I knocked on the window and raised my shoulders in the universal sign for, "WTF?!"  They shrugged back at me, and I figured I'd leave them alone, but when they were still there another minute later, I knocked again, and they glared at me, as if this were what my front lawn was for.

So, um, what do you think?  Was I wrong to gently encourage them to move along, or should my front lawn be the world's toilet?  I'm a little afraid to go out and take a look, y'know; for the amount of time they were there, I'm afraid she might have taken a dump!

Let's say the neighbors have decided to mark off a block with what appears to be a bunch of stolen road signs in order to film something.

Which city department will care about this most come tomorrow morning?

The overflow parking / sense of entitlement is bothering me.

My boyfriend and I have lived almost six years together in an apt. complex and we're on the top floor. We never had any noise complaints during our time living here, until a new couple moved in about six months ago. Before we even had seen them, they filed a noise complaint about us a month after they moved in. I understand that there are differences between us, mainly my boyfriend and I are not on 9-5 schedules and tend to be night owls, while this couple seem to be early risers. I've tried to be considerate, but then we received another noise complaint two weeks ago, apparently from them again.


One major issue they complain about is our portable air conditioner- we aren't allowed to have window units yet our particular apt. location gets direct sunlight from dawn to dusk, and they cut down the trees that once provided shade.
It is so stifling up here (3rd floor with high ceilings) and when it gets above 80 it gets unbearable without AC. Even the portable AC isn't that great, but it's better than nothing.

But what irks me a lot more is the apt. manager put in the noise complaint note that residents should not be taking showers, running the dishwasher, etc. after 10 PM. Now, does that strike anyone else as a bit odd that the apt. manager and/or company is saying I can't shower when I want to?

While we would love to move, I'm unemployed and it's not financially possible at the moment. However, in the meantime, I'm worried that the complaints from this couple might get us evicted. It seems so ridiculous, but now if I want to take a shower and it's past 10, I feel like I'm putting us at risk, and this is not how I want to live. Or I feel I can't keep the AC on at night even though it's nearly ten degrees warmer in here than the outside.

Is there anything we can bring up in our defense if there are further noise issues? Can you really file a valid noise complaint against someone for taking a shower at night? There is nothing in the apartment rules handbook stating any of this, by the way.