I have a friend who lives in Portland who's having crack house trouble. Tell me, if you know, if Portland has a statute on either the state or county level, that allows the state to confiscate the property of a person who knowingly lets drug activity happen on their property without trying to stop it?

The letters notify both the property owner and the occupant that allegations have been made regarding illegal drug activity at the address. If the allegations are proven to be true, then an agreement is entered between the Police Bureau and the person responsible for the property, outlining a plan of action for the property. The Chronic Nuisance Abatement Ordinance calls for civil penalties, including closure for up to a year and fines up to $100 for each day the nuisance activities occurred on the property or the costs to the city for abating the nuisance. The enforcement process begins with a letter, which instructs the property owner to contact the drug house coordinator. The City Attorney's office then begins negotiations with the goal of settling the case without having to close the property.
</div>
I need to rent a car for an extended weekend get-away later this summer, but the downfall is, I'm under 25 (and over 21). Are there any places that won't charge the extra under 25 fee? Or any places that charge less? If it weren't for that, the car rental would be amazingly affordable.

I have a 1988 Audi that has freon air conditioning. I can't afford to get a conversion done, so where could I go to have it recharged?

My car turns into an oven when it's hot out (like today) and hot leather = ouch.

EDIT: Looks like I'm screwed. Recharging cost about the same as a conversion.

Bassit Auto said $390 for a conversion, and they don't recharge old freon systems.

Midas quoted me $320 for a recharge and said a conversion would be even more.

Macs Radiator quoted me $78 service fee and $54/lb for re-charge and said it wouldn't even be worth it to get a conversion because the new freon is only about $40 cheaper.

Hey, does anyone have any suggestions for lakes to kayak/canoe at in Central Oregon (specifically near La Pine and Bend)? Pluses for lakes that are less populated. Thanks!
Also, if there are some good food suggestion (besides Deschutes Brewery...already going there), that would be helpful too.

What happened to the rental market in Portland? All of a sudden there is a huge volume of for-rent and share ads being posted to Craigslist, landlords are offering free months and so forth, and it seems like the housing wanted posts have dried up to a great degree.

My only theory is that everybody who was from somewhere else and subsequently got laid off has packed up and left.

I just started riding a moped I scored unexpectedly and have some questions for which google doesn't seem to have satisfactory answers.

Namely, I'm looking for recommendations on safe routes to take around the city-specifically bridges. I've learned the hard way that the Hawthorne and Morrison bridges are scary due to the steel grates in combination with my little moped tires. Ross Island seems like too much fast traffic and I'm assuming the Steel bridge has the same steel grates. Is Broadway my only option to not feel like I'm going to die? Hmm.

If it matters, its a newer model Yamaha Vino which tops out at a rocket-fast velocity of 40 mph. Incidentally, this does not mean I'd like to ride it around regularly at 40 mph.

Yes, I'm going to hit up some moped/scooter shops for additional advice, but I'm kind of hoping for some info that'll get me around town safely till then. Like, this evening.

*EDIT*
Seems like Burnside and Steel are the winners. Thanks!

So when there is a event like abook signing going on at the Powells downtown, where does the event usually take place? Is it usually in a specific area like the cafe or like the Rare Books room?

what are your favorite sports bars in SE? we specifically want to watch hockey thurs & friday nights....

Hello damnportlanders,
My boyfriend and I are yet more people that are moving to your fine city. He's a Marylander and I'm *cough*Californian*cough*. We've been living in the Washington, DC area, for 6 months and are desperate to return to the west coast. And your city is super rad. I've been lurking here for awhile and have a few questions that I hope, amidst the snark, you folks can answer for me.

-My boyfriend has a job lined up, teaching physics at Columbia Gorge Community College. He is also going to be starting a physics PhD program at PSU. We would like to try for housing in the SE, west of 50th, and between Fremont and Powell. He only has to commute out to CGCC twice a week, but I'm wondering if anyone can comment on the ease of a commute from that area heading east along the gorge. Or if anyone can recommend a better area to be if you're faced with that commute.

-I'm loath to say it here, but I will, in fact, be looking for a job. Sorry! I was hoping to start graduate school (Geology), also at PSU this year, but the professors I want to work with have been on sabbatical, and they advised me to wait until they got back to apply. So I won't be looking for a full-time, career gig. I've been paying attention, so I don't need a bunch of responses telling me that there are no jobs- I'm already painfully aware. I'm wondering, though, if there is a potential need for science and math tutors?

-I would love to volunteer some of my time to get to know my new home and meet new people. A google search turned up Hands on Portland- can anyone tell me what it's like to work with them? It looks like they have a lot going on, is it easy to get involved?

I'm sure I'll be posting more questions as I think of them; I'm pretty stoked that this is such an active community. I promise not to drive like a douche (I'll mostly bike anyway) or complain about the weather (which has got to be better than a DC winter anyway). Thanks, and snark if you need to.
-Kat

Google-fu has failed me....

So does anyone know if it's illegal to NOT have any sort of curbside garbage pick up in Multnomah County?

Allright, I'm disgruntled with work and cheered myself by looking at chicken pix - namely, my lil Chicken McNuggets (yes, I call them this...in theory, it keeps them in line). So now I'm sharing them because they are SO DAMN CUTE. 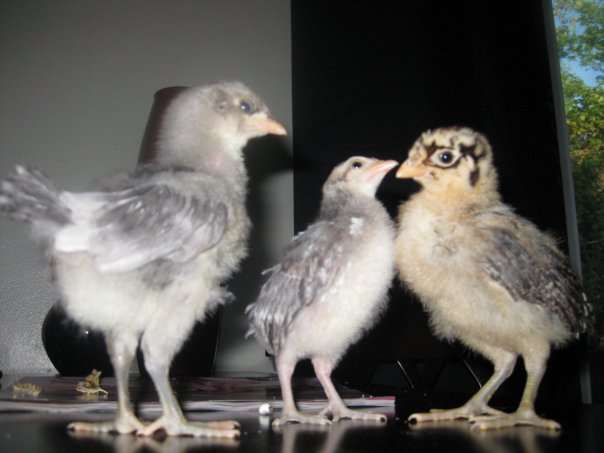 Can anyone guess which one is the oldest?


Check out The Green Dragons website, they have a full bar, a great menu and a TON of beers, so many they can't keep them updated on the website!

Another question for you DPers.

On the Starlight Run website, it says: "Walking the route is not permitted." Have any of you done this run in the past? Is it okay to walk part of the run? I'm doing the Couch to 5k program and should be able to run 20 minutes straight by that time, which will not cover the 5k. I intend to run the majority of the race, but would need a few walk breaks. Is this allowed? It's not walking the whole race, so I don't see why not, but let me know if you know otherwise.

Have any of you had this problem (green spots) on an LCD TV before? What is this?! Can anyone recommend a good repair person in the SE area?

Okay kids: tell me two good things (no matter how small) that happened this past week.

I know some of you DPers are nerds to the max. Im thinking of xfering off my current wow realm to a preferably PvP Pacific based, mid-high population realm. Any of you got the sweet spot this side of the of the country. If so please help :)
Collapse