Watchmen was awesome. I've been waiting 25 years for this movie and I feel it was worth the wait. The minor annoyances are far outweighed by the rest of the awesome.

That isn't your PSA though. Your PSA is that this ***IS NOT*** a movie to take children to. There is graphic violence and Cinemax levels of sex. Lot's of floppy blue penis as well. I was simply amazed at the amount of pre-teens that were in that theater, and all of them were there with their family. None of them stayed for the whole movie. I found it humorous myself but I am sure that little Sally will have a great time dreaming about a 6 year old girl being torn to shreds by a couple dogs.

Any Blazer fans out there want to go to tonight's game with me? I have a pair in section 320, up top across from the Blazer bench. Tickets are $25, but I will sell it for a little less than face value if you actually know some hoops and are a Blazers fan. If you would like to buy both for $40, I'll bite, but I'd much rather go with a fan and have someone to talk about the game with.

My sisters b-day is coming up on the 14th. I had planned to get her an ipod and have it engraved with a quote from the Land Before time. As with everything else in my life I completely spaced it until today and now it too late for engraving and shipping before the 14th. So my question is: Is there anywhere in town that will engrave an ipod same day? If so, about how much will it cost?

thanks for the help.

EDIT: Things remembered does same day engraving on ipods. thanks for the help. whew! saved by damnportlanders.

How do I remove this? 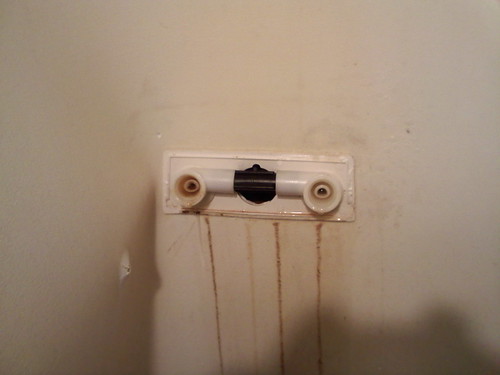 Being totally destructive is A-O.K., as I'm tearing out everything.

I'm in need of a good insurance agent. The one I have currently sucks, and she's in Bend. Seeing as I've lived here over a year now, I'd like to get a local agent. I'm looking for an agent rather than a cheap policy because I've got a number of insurance needs - Cars (2, though one won't be driven for a few months, so perhaps just comprehensive on that one?), renter's insurance, and maybe a super basic "in case I get run over by the MAX" health policy. Discounts for multiple insurance items would be sweet, as well as places that offer good student discounts on Auto Insurance. But what's really important is someone who is competent and nice - and who will help me get what I need without selling me needless stuff.

Sorry for posting so much here lately, but I have another question. I just moved into my new apartment which is the first place I've ever lived in that uses natural gas (for stove, heat and hot water). Considering I pretty much never cook, I use a separate heat source and most of the natural gas I'll use (I assume?) will be for hot water, how much should I expect my monthly bill to be in general? Any guess?

So according to the email I got from the Neko Case mailing list, she's coming to the Crystal Ballroom on June 5 and 6. I think there's a presale right now but I checked on her website and it said presale tickets for the June 6 show are unavailable. Stupid question, but does that mean that they are already sold out or that there is no presale for that show? Also, if they're not sold out, does anyone know when they go on sale to the general public? I checked the Crystal Ballroom website but she is not yet listed in the events schedule. I emailed the Crystal Ballroom website about this too, but I am not sure if I will get an answer, so I decided to ask DP as well. I'll probably get an answer faster here anyway.

my brother is in town and he was wondering what kind of extreme activities (eg skydiving, zipline, paintball--any memorable experience) are available. we're pretty much up for anything and cost isn't too big of an issue. he leaves tomorrow night so we have the whole day tomorrow for activities. any suggestions?
I'm looking for a good general doctor in Portland.

I need someone who is an M.D. that accepts Blue Cross health insurance. My ideal doctor would be someone who is educated in both modern medicine, and more natural solutions. If someone specializes in diabetes that would be great, as it runs in both sides of my family and I am at risk.

Does anybody here have any suggestions?

i've already posted it on craigslist, but i'll give priority to a dp-er if one of you guys want it.
the link is here: http://portland.craigslist.org/clc/ele/1065079524.html

(i'll be willing to knock off a little on the price for a dp-er).

if no one wants it, move right along :)

hey crafty dp, im looking for some wire, like the stuff for beading and jewelry making but alot thicker. probably around ten gauge or higher. anyone know any place i can find such a thing? ive tried michaels and home depot with no luck. it needs to be pliable, but hold its shape pretty well. ne would be great, but willing to drive. just not to gresham. or beaverton.
thanks!

Anyone know if there's any place in this town - anywhere - that I can get a print of a digital image that is panoramic.  Some people don't seem to understand why it's not cool to get the "whole wedding party" photo with the minister cut off on one side and the best man cut off on the other. Everybody keeps telling me they could do it if I gave them a roll of film but not if I give them my thumb drive.   I don't understand why that is, but arguing doesn't seem to get me anywhere so instead I turn to you, oh wise DP.

Thanks for all the help with my last post.  My partner and I found a place just across the river and it seems we're all just about set to move in a week! Jobs are lined up and housing covered, all work no play makes me just plain grumpy.  And here enters my question.

I'd like to start boxing. Mostly to get in shape but I'd like to compete eventually. Are there any boxers in the house and where do you go? I'd like a membership that's less than 30 a month if possible.

I just turned 21 a few days ago and I want to know what the best place to go dancing is! I'm looking for a place that plays a lot of hip hop, preferably "real" hip hop, not Z100 bullshit (but a little of that thrown in is good too I suppose). I went to the Crown Room last night and even though it was a lot of fun, it wasn't really hip hop and it was a $15 cover. Is that normal for them? I think it was a special event, too. We also checked out the Fez but it wasn't really happening (at least not when we were there) and it was eighties night.

I've heard Holocene is good, but I've also heard it's ridiculously crowded and full of douchebags (probably true of any popular bar, though). We were going to try Aura but it did not look like my kind of scene...too many orange tans and guidos.

I implore you...help me find a place to shake it.

I am going to mexico in a week and a half. It is a last minute trip and now I am scrambling for a cat sitter. I have emailed and called and left messages for both Cats in the City and That Cat Lady. Unfortunately, I have not heard back from either of them so- Does anyone know of a reputable/really trustworthy cat sitter? My cats have a food and water reservoir so they would be fine with visits every two days. So a total of 3-4 in home visits. I am willing to pay between 15-20 dollars for a 30-45 minute visit for my cats to get some human attention (so they don't shred my couch out of boredom), refill food and water and to have their litter box cleaned. I am looking for a company or someone who has references. Please, someone guide me to the perfect cat sitter so I can go to Mexico.

I was sad because when there was a trade-in-your-mercury-thermometer-for-a-digital-one event, I discovered my "mercury" thermometer isn't actually mercury, but some other, safer, mercury-looking substance. Wah.

However, today, I decided to tear out my basement bathroom and in doing so, discovered a perfectly good kids mercury thermometer!

Is there someplace I can go right now to trade it in for a digital one, or do I need to wait for some special event?

I want the digital one and I don't want to buy it.

paradoxical? discuss.
About 10 DP'ers (moderator included!) were just aboard the yellow line to EXPO Center. One I noticed was wearing a dP pin/button, but I actually noticed them because they were yelling the letters "dp" at each other while discussing "The Watchmen". I tried to describe which poster I was in lj form (in real life form, I sometimes wear heels and am in fact NOT Jerry Seinfeld), but nobody recognized my ~insignia~ or whatnot. I was gonna pout over being not e-famous enough, but I figured I'd channel that sadness into this post and chronic alcoholism instead.

So... yeah, who did I just talk to? I want to put a digital icon to the faces on the train. Thanks.
Collapse