This is the entirety of the article.

Not even vaguely Portland related.

Stolen were a SOBE energy drink and a vibrating condom, according to a report.

[edit - wow, I can be a real dick after a couple of martinis, can't I? I offer my apologies for this post and ask you to ignore it.]

A couple bits of weird-ass shit I've seen lately. Perhaps you can help me figure this out.

All Photos taken with a NIKON D200
Film shots are being processed and then scanned / digitized.

Comments and critiques are always welcomed.

All images are for purchase as well...please contact me at :

Gender (Free) For All March

Upcoming Meetings:
Our first town hall meeting was a huge success. We had several people show up and provide us with valuable feedback, which allowed us to begin to shape the direction of this year’s march. [Visit our MySpace for details on what was discussed at that meeting]. We invite you to come be an important part in the planning of this event.

Please repost and pass the word!

Prepare to lose the rest of your morning...

Just a reminder about my art show later today at Barberama/Javarama on NE MLK and Failing from 3-5pm. Come on by :)

For anyone interested there are two bald eagles hanging out in a tree in kenilworth park at se holgate and 34.

Ok, so I asked a similar question about this a bit ago, but I can actually afford something that isn't cheap now :D so if any of you DPers know of an anvil that isn't cast iron that I can buy up, or any antique stores in town where you've seen anvils, let me know so I can check out what they've got. Weight isn't too much of an issue, I'll just bolt it to a good sized tree stump or something. A farrier anvil would work just as well as a forging anvil for my purposes. I can graduate to something else later if I want to. - Harbor and Freight only do cast iron anvils, which won't work for what I need.

I was wondering....those of you working in the food industry, do you find yourself making judgments about people based on what they order and how they leave their table after they are done eating??

Looking for a late afternoon (or just not to early) place to have brunch with a friend tomorrow. She is a vegetarian so veggie friendly choices would be great. Anyone know any good places that won't break the bank?

First of all, does anyone know what this is?  It looks kind of like a muffin but the top is smooth and round and then there's another round ball of dough sticking off of it?
Second of all, does anyone know of a place in town I could find one?  I am really craving a brioche!  (If you know of more than one place this delight might be sold, which is the best?)
Thanks!

Edit: Awesome, thanks!  St. Honore's, stumptown, pearl bakery, and pix are the places to be. 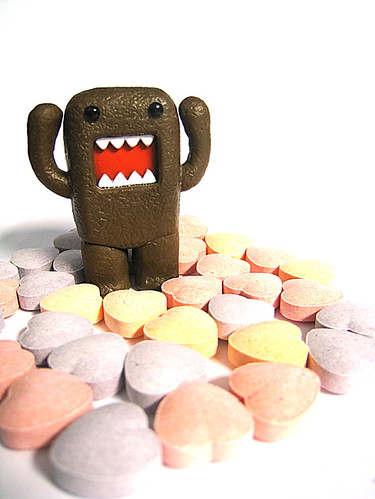 Hey, me and my Valentine

thatsassylassie were talking this morning about a type of candy hearts we remember that had raised letters, almost embossed, instead of the ones you usually see, which have the word or words stamped into the surface.

Anyone else remember this kind? I haven't seen them for years. Remember, we're both pretty old (i.e., over 30).

Anyone know where to get 'em? Target has about a zillion types, but even the different makers of the candy hearts seem to have the same kind of lettering: stamped or inked onto the surface, rather than raised.

I'm in desperate need of someone in the NE area that plays Star Wars d20 or Star Wars Saga Edition for my wonderful guy to join in on.

We are new here and don't know many people and he's starting to drive me crazy and I think if he doesn't get out of the house soon and find a group to play with I may just have to kill him.

Dear pedestrians, it's great you've decided to leave your sofa now that the weather is becoming more tolerable, but please, share the fucking pathways. A family of 5 or 6, complete with a couple of those ridiculous mega-super-duper-baby strollers should not walk side by side occupying the entire Esplanade. And if you do decide to do this, when a group of cyclists comes up behind you don't turn around, see said cyclists, then continue walking without getting out of the way. If you do this, the aforementioned cyclists will plow through your little Red Rover Red Rover chain and laugh at your bellowing behind us.

Furthermore, it may be cute watching your tikes run around like headless chickens on a sugar high, but some of those kids came damn close to getting flattened by cyclists today. Not so cute. Kudos to the one mom whose kid ran out in front of some cyclists (who barely dodged him) in front of OMSI. Watching her run out into the pathway, snatching her kid by the arm and dragging his ass into the dirt made my day, though one could argue it was her own fault for letting her kid roam unsupervised.

Moms and dads, I know you don't need to pass an IQ test to have many, many, many children, but consider this: these pathways serve joggers and cyclists year round, and while it's great you've decided to join us, albeit in a much slower and far more dense manner, it's be spiffy marvelous fanfuckingtastic if you could at least manage to pull one or two of those brain cells out from your ass and activate them before leaving your house, lest one of your loin nuggets gets flattened under my front tire.

So my dad just gave us 1 pound of  ground elk meat. I have never had elk before so i have no idea how to fix it. i know i can probably make burgers, that seems a little boring. Does anyone have a elk recipe that they love that i could possibly try. Tonight is the night to eat outside the bubble.

I'm moving into a new place soon, so need a few recommendations.

Movers...or truck loaders/unloaders, since we're packing our own stuff and renting a moving truck. I found these guys through DP, but I don't remember what was said about them. Has anyone had experience with them? The movers we used last time, which we also found through DP, have gone out of business (which is a shame...they were extremely fast and efficient). Other recommendations/experiences would be great.

Carpet cleaner. The carpet in our living room, upstairs hallway, master bedroom, stairs and possibly two bedrooms need cleaning. Ideally someone who is good at getting out pet stains (one of our kitties has had some post-surgical barfing issues).

If it matters, I live in Alohatron and am moving to Beavertron. Thanks!

Gah.  I know this has been asked before.  I thought I memory'd it but now I'm not finding it.  Someone posted looking for someone to ebay stuff for them, a couple people offered their services in teaching the person to ebay but they weren't so interested.  I am interested.  I'm sure I can walk myself through their steps, and I have a decent idea of how to figure out postage/handling, etc.  Maybe I'm looking for help figuring out what things are worth trying to ebay and which aren't?  While I'm posting this now, I may not get around to actually using this service for a couplefew weeks/months.  But if this is a service you might be able/interested in providing, would you let me know?
Thanks

someone meet me for pizza at stark naked! limited time only! call now!

ive had comcast for over a  year now and they are now charging  134.99 for the 99$ package that i signed up for in oct 07.  so im thinking about switching. verizon has a package for 74.99 with 200 cable channels, phone and internet at 20 speed. sounds good right?
do i have any other options?
what is your internet provider? how much is it and what does it cover?

what is your phone provider, same details plz.

tv is just icing to me. i can live without it. but if it comes bundled and its that cheap, ill take it.

plz help me save some money.
do you have any beef with verizon? is it a good company? ive only had it for cell phone usage and that was over 5 yrs ago.

I am craving Girl Scout cookies something fierce and NEED them ASAP. Don't mess with the pregnant woman and her cravings!

Who's selling cookies? I need my fix! I'm in Tigard so the closer the better, although I will drive for some cookies.

I was wondering if there was anyone here who could tell me where I could find a super awesome nanny network to join up with?

EDIT; it could be online or real life...

i was thinking a group of people who work as nanny's that get together and exchange ideas, maybe have playground play dates with the children etc. i don't know anyone else who works as a nanny in portland and thought it would be nice to have a little network of new pals to chat with in the same field.

If this doesn't exist, would anyone be interested in joining up and making it happen?

An emergency dental situation has come up tonight. Does anyone know of a dentist who is open on Sundays? I'm hoping this isn't too much of a long shot.

i am pregnant with my first child. i am looking for recommendations for an OB/GYN. bonus if you know they take OHP.
Collapse