There are several things you can do when you have too much time on your hands.

For example, you could find an internet forum and spout off cliches about the difference between "morality" and "ethics".

But, if that gets boring, you can always try to go from Lion's Bay, BC, to Lyons, Oregon, using only buses.

Anyone want to try it?
Trans March Portland: MySpace

Town Hall Meeting discussing PDX Trans March
Come and decide the shape of the 2009 TransMarch! Should we march on a different day? What other ideas do you have for the march? Do you want to volunteer? Give your input. Trans-identified folks and allies encouraged.

Please repost and pass the word!

We have a small-ish pile of drywall and insulation from fixing up after a pipe burst. I've found lots of places that will come pick it up and haul it away, but the base fees are more than I want to pay. Is there someplace I can take it myself? Anywhere in Washougal, Camas, Vancouver, or NE Portland would be great. Thanks!

My kitty is overdue for a vet visit and I'm unfamiliar with good veterinarians on the westside (specifically, Hillsboro around Cornelius Pass Road).

One place I walked into was Companion Pet Clinic on NE 24th in Hillsboro. Bright and clean, with separate waiting areas for cats and dogs, and even a resident office kitty. It's smaller, but the prices seem reasonable (around $25 for an exam, vaccines range from $10 - $20 and the all important (to some) neutering is about $38).

Are there any other things I should look for in a good vet/office? I've had cats before, but they've all been very healthy so shots were all I needed. My kitty needs an update on those and is having some pain when pressure is applied to his right abdomen - so I'm wanting to make sure I go to a good place!

Any thoughts or specific recommendations on this particular clinic, or others in the close-in area I should look at?

Have a great Wednesday!

Long story short, some things are falling into place and I'm about 90% sure I'll be taking a job in the area. It would start in mid March. Where is, in your opinions, the best place to look for apartments? I've started looking on Craigslist, but that's just one.

The job is in West Linn, so I would prefer to live there, Wilsonville, or Canby, if that makes any difference.

While trying to unlock my bike a few days ago from work, the lock was starting to stick, so my brilliant idea was to just turn the key harder. bike lock >key. My key broke, and my lock is still holding steady. A hacksaw does not cut it.....any tips on what will? The brand is alcatraz, it's a ulock, and about 8 years old.

When I came home from vacation 2 weeks ago, my housesitter told me my cat was preggers....sooo...who wants a free cat soon? She's due any day, so in a few weeks i'll have a batch of kittens up for grabs

my cat is awesome, she has thumbs
take her clones

In case anyone is interested, there's a website full of JPGs and PDFs of newspaper covers from around the world about the Inauguration yesterday: http://newsdesigner.com/top50/

In case no one is interested, its still there anyway.

Im curious to know if their are any other DPers of late teens early twenties (or old/younger) that enjoy random adventures, preferably late at night, male or female, that would be intersted in creating such adventures with me. I get bored a lot, I love adventures, I have no specific ideas, but I dont have many friends up here (Id say I have about 3) and Id love to get some more.

(Also if you are in the area of 56th and Glisan, let me know, I need friendly neighbors too)

So, this thread is to discuss the Sam Adams case, but you can't say anything intelligent, insightful or factual.
Whichever side you take, your job is to post as many cliches as possible. When responding to someone, take their argument, turn it into a straw man, and refute it with more cliches.

Since a lot of us are jobless...


I'm looking into expanding into some freelance work with my Filemaker development/management skills. I've never worked freelance in this area and I'm curious if anyone could recommend a decent site to post availability for such things? I'm familiar with the standards: craigslist, careerbuilder.com, monster.com, indeed.com etc. but looking more for freelance-specific.

Thanks and best of luck to fellow non-working DPs.

PS Yep, I know Filemaker sucks but a lot of industries use it and need help with it. =)

I ran across this link and wanted to share.

KPTV/Fox 12 and other sources are reporting that Intel is going to lay off 5,000 to 6,000 people worldwide including over 1,000 people in Hillsboro
http://www.oregonlive.com/business/index.ssf/2009/01/unspecified_afternoon_story.html

Our house is having a plumbing emergency of sorts. Dishwasher and kitchen sink won't drain, causing a veritable flood of water in our kitchen. Anyone know of a good plumber who won't rip us off and can come in a hurry tomorrow?

ETA: Rescue Rooter is here. He's fixing it all up. He's not too bad looking either. Bowchickabowbow!

I am just writing to express my support in what must be a difficult and wrenching time for you. This letter comes quite unsolicited, but, as long as so much of the public feels impelled and entitled to broadcast messages of detraction and disapproval, perhaps an opposing message, however unknown or unimportant its source, is not inappropriate.

Nothing could be more human than to try to conceal details of one’s sex life from public view. And nothing is more agonizing than having the private details of one’s life exposed for judgment to one’s peers; how much more so when the audience is an entire polity. Even the most ethical of us struggle with these dilemmas; indeed, ethics often demand discretion. I haven’t followed the recent scandal in depth, but as long as you haven’t broken any laws, violated any promises, or maliciously injured anyone, you will continue to have my full support. I hope this nonsense is forgotten soon, and you can get back to conducting the business of the city without distraction.

Very truly yours,
(me)

I'm going to mail this tonight, unless someone can provide a powerfully compelling argument that I shouldn't (I'm not sure what that would be: it's a violation of some law I don't know of? he's been impeached already?).

I have tried google until my eyes crossed and came up empty. This is my dilemma: I am one of the rare people here that does not have a coffee addiction, actually I don't touch the stuff at all so therefore have zero use for a coffee maker. The thing is however, I do like a chai latte here and there and have been known to buy the Oregon Chai for home use. The thing is, it just isn't the same without the steamed milk. I have been looking for some sort of apparatus that will allow me to get the "latte" effect at home without having to purchase an entire coffee machine (that will never get used). Does something like this exist? Am I just not using the right term when I google?? Please tell me that something like this exists out there somewhere. I have found some kind of foaming thingy, but it doesn't seem to use any heat, which heat would really be fabulous.

This was a heart-warming sight as I headed past City Hall and watched camera crews start setting up their lights and dishes. Hopefully they are just jumping the gun. 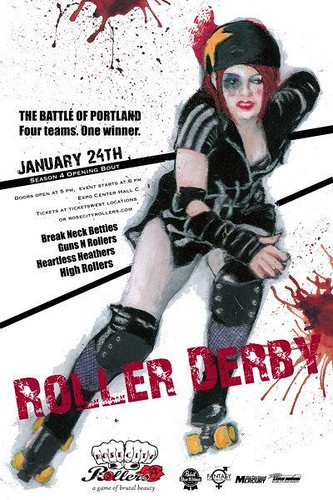 So, who did Sam Adams piss-off/crush in the past? Most articles about him make these vague references to him being a hard nosed politician who you don't want to cross. What, specifically, are they talking about. Was it just that he was Chief-Of-Staff (read: Official Enforcer) for Vera Katz? Or was there a specific incident?

The only reason he'd resign over this is if he wants to stay politically active but he's worried his enemies are going to use this moment of weakness to press him on something else.

What's the history here for a relatively recent Portland transplant?

1) Where can I find an insane selection of rare or specialty carbonated beverages in or near this city?

2) Has anyone seen long underwear (specifically bottoms) in bright-ass colors like green or red? I'm trying to find the traditional weave, not some new-fangled, stank-defying, SYNENSE-Y crap. I don't understand why finding these is so hard.

3) There was something else, but I can't remember.

Me and the other maybe 8 people in Portland who aren't watching LOST tonight come up with some wicked mindfuck to pull on everyone who's watching?

I've seen maybe 2 episodes total, so I don't know enough about the show to figure out what would properly exploit the suspension of disbelief necessary to enjoy it.

And if you don't know about Wonkette, you really should...

So I've heard different things about the jobs in Portland, that almost nowhere is hiring, or just better paying jobs, that fast food ones are still quite available and hiring often. Since I am in New Hampshire (though a native Portlander), and the city I am in, Rochester is in a pretty much complete hiring freeze, how are the fast food jobs there?
I'm been trying to come back for the past two years, but until my grandmother is what she considers in a steady enough situation to take me in, I haven't been able to, any suggestions for that to, which don't involve staying here?

Hello, DP. Does anyone know someplace local I may find Twinings Lady Grey tea? I've only been able to find it in a variety pack, if at all, and don't want to order a case through Amazon or such. Just a couple of boxes in a non-variety pack will do. Thanks!
So, I'm wanting to read some books about religions, mostly the history of Buddhism, Christianity, and Judaism. I went to Borders, and I couldn't really decide on what I should get. I don't want something that's trying to prove God or disprove God(s) unless it had historical/scientific facts proving such.

I have really bad luck in picking books, so could you recommend something for me?

I almost picked up the God Delusion by Richard Dawkins today. Have any of you read it before? If so, how did you like it? I got something else instead but I'm still not sure about it.

Now, I'm curious as to why Sam didn't have both sex sandals in his office. Just one?
Collapse