EDIT: Hey, I WAS reading it right! The package came today!
But the puzzlement over the second part still stands.


OK so I'm waiting on a package and decided to check the tracking tonight.

I look on the UPS page and I see this


Am I reading that right? Does it say it's in Portland already and shipped out this evening?

I ask because not only would that make it Sunday night, it's also a repair job and I only sent it out about a week ago.

In addition, nearly two months ago I sent packages to friends around the world. My friends in Italy and Saudi Arabia have yet to recieve theirs (although another package to Italy got there in about a week and a half), and looking up the customs form numbers on the reciepts yield nothing, and nothing for either of them either. All my Italian friend said was that looking up the number told her that the package wasn't in Italy yet. Someone at the post office told me that if I didn't get special tracking I wouldn't be able to look anything up, but then how could she find that the package wasn't in the country yet?

Portland related because you will all submit to my will. That's right, even YOU, Adrian.

Ok. Apparently my previous homeless post incited some thought provoking dialog, and I agree with about 99% of it. I would just like to say, that although I don't think the numbers are even close to as frightening as I previously posted, lots of small children are homeless too. I'm not talking about spangers or run aways. I'm talking about 11 year olds who's parents screwed up. I'm assuming that families with kids get some sort of preferential treatment in shelters that's why we don't see them on the street very often. I guess, after consideration, I just hope people think of donating blankets and little mittens to them. They are the one's who shouldn't suffer. Let's just take everyone else out of the equation, can we at least agree on that?

The founder of this community used to be one of those little kids, you know. Have a heart.

I had no idea how many of you would want a buttons that says "SE SNARK ST" weird.

All the button orders that I have received are in the mail today. If you are in the Portland area you should get them tomorrow!

To answer the question as to where to find me to get a free button (or a few for a good beer), tonight I'll be at the Alberta Street Pub. My friend Mikey hosts free movie nights every Monday there. Tonight he's showing the Big Leboski. It should be a fun movie to see with a bunch of folks. it starts at 9pm.

I really need some iPod help. My boyfriend pried open my 5th Generation iPod Classic and now the battery won't hold a charge at all. It will only work if it's hooked up to the wall or my iHome. Before he opened it it worked fine.

Does anyone know how anything about iPods? How to fix it, if the battery just randomly died the same time he opened it, if he pulled something he wasn't supposed to when he opened it, etc.

I've tried to google iPod repair shops but my googlefu is failing me. I'm so upset about this, my iPod is my life.

When I tried to figure out what was wrong, I can across a tutorial on how to open the iPod and it mentions using a hairdryer to melt the glue, maybe he messed something up there. I need help!


Also, worse case senario, I'd need a new iPod. Anyone have one for sale? This is an old 30GB, I don't need anything new.

I went to the Mac store to ask what the genius bar is and if they have one. Learned that it's owned by Apple and not them. They did help though. Apparently when he opened it, he might have messed with the battery wires or unplugged one. My options are:

1. Send my iPod off to their Lake Oswego place so they can look it over, it's $45 just to send it. If they need to reconnect the wires then they take the cost out of the $45. If it's something else then they'll charge me more. Plus the screen if fucked up from before, that's why he opened it to begin with. Which the new screen will cost me more anyway. The customer service guy said I may as well just look into buying another or upgrading.


Does anyone have an older iPod they don't want and would like to sell?

Dear the Damned of Portland,

I am taking a friend shopping for her Christmas present to find a reliable used bike for general commuting. I want to spend $50-$125, depending on the bike. Where should I look?
So far I am thinking the Community Cycling Center and North Portland Bike Works.

Has anyone had any experience with MetroPCS (cell phone company incase you don't know) here? I know it was gaining popularity in Georgia, and had a pretty loyal following.

Also, does anyone own an iPod Touch and want to tell me how you feel about it? I really don't want to sign my life away to AT&T for the iPhone, and I heard that the iPod Touch is really comparable. I figure since I live downtown, in PSU housing actually, I shouldn't really need the phone part. I can just use PSU general access wireless or one of the free wifi spots. Of course, if you think I'm utterly wrong and I MUST HAS AN IPHONE, please feel free to elaborate. :)

i have a quest modem actiontec model# gt701.
first dibs can take it.

i also have a hdtv hanger that you set up and see all your tv so much clearer. its by philips. also free.

i have a brand new never worn, still has stickers wonderful white tee that says "need head" and has a stick figure with no head on it. i found it hilarious and perfect for the boyfriend but i could only find a medium, its a large medium i think, and was hoping to return it for bigger and then we broke up. you can have it for 5 bucks. or less. haggle me.

dont judge me. i have jenna jamesons autobiography. complete with dirty pictures and sordid stories. its free. come and take it.


Tell me when you can pick up.

The 2010 US Census is hiring. And they need 7,000 people in this part of the state this spring, 2000 more then they originally expected. Currently they are looking for office clerks and people to gather addresses. The pay is good, starting wage is $15/hr. Anyone interested should definitely apply.

So! I've made it through to Chapter Five, and here are a few thoughts.

It's not as much of a stump speech as I was expecting, and not completely boring from a policy-wonk perspective. It's interesting to see his thoughts on - well, at this point it's been Values, Constitution, and Politics.

Two places I've marked as favorites: the difference between values and ideology, and special interests vs. "a like-minded group of individuals."

Who's reading with me, and what do you think?

As in, looking for one. For a friend. He's doing the starting over thing, taking the Greyhound from UT and will be in town on Wednesday.

He doesn't have a job yet, but is not going to be picky about finding one. He's 43, allergic to animals, non smoker, blah blah blah.

If you know anyone who is going to be needing a roomate in about 2 weeks and is willing to take a chance on a friend of an internet stranger, give me a buzz. :-)

EDIT: No, this isn't the only place I'm looking/he's looking/whatever. Just covering all the possibilities.

Okay, so we've got a Linksys 802.11b router, and a couple of computers in the basement that are having a hard time getting a signal. Someone suggested a wireless booster.

Any ideas about what would work best?

Anyone else still have your Christmas tree up? Not just up, but fully decorated?

I need a spot to grasp fourties and use my boom bokz, alley wise. Under burnside bridge? Max accessible preferred, nerd..

this weekend, I'm going to write on people. Does anyone have great experience with (affordable!) temporary art inks that are semi-okay on skin and somewhat easy to remove?

I have a tonne of Higgins eternal (because I'm into calligraphy) but I'm not sure if my friends will be completely thrilled with me just slapping high end quality permanent ink on their skin.

Anyway, if any of y'all have experience with this, I'm curious about what stuff you use.

A few days ago, my room mate's friend was visiting us, since my room mate was due to have her baby. She had to bring her two dogs, because she had no place for them back in tri cities. Well, Friday afternoon, her smaller dog, Baby, somehow escaped. We think the neighbor kids may have unlatched the gate (they are always playing around it). We looked on Craigslist and other pet sites hoping to find her and walked around the neighborhood. Sunday night, I found a listing on the animal shelter's website that described her exactly. I called the woman, explained the situation, and was told to send a picture to make sure it was the right dog. So I sent the picture. Sure enough, we were talking about the same dog. Now I am met with questions and accusations. Why didn't I fix the dog? Why was she roaming around in heat, it's irresponsible, etc. She did not have tags. Now, I KNOW this is irresponsible. It wasn't my dog at the time she got out. The friend went back to tri-cities, thinking the dog was gone forever. My room mate fully intends on keeping the dog and getting her microchipped and ID'd. We love Baby and she visits so often she is like a part of our family.
She had her friend who was a vet check her out (which I did not ask her to do, but appreciate it considering she may have been hurt while out wandering). I love this dog. She is the sweetest little baby ever and I just want to bring her home. Now this woman will not return my calls or my emails. It's only been one day, but I expect a fellow pet owner to understand my desire to bring Baby home! She has my number. She has my email. I've left voicemails and emails and nothing. What can I do at this point?

thinkbettersick over at the Alberta Public House. She stood up and kicked her beer over, but gave me buttons anyway. I bought her another beer.

I hadn't been in the joint before. It was art n craft night on one side, with a DJ with actual vinyl serenading, and on the other side a scratch band was doing irish tunes on two fiddles and a guitar. Then the woman showed up with the full sized bass. Why do the small people play the big instruments?

But hey, if anyone sees me with my "SE Snark St" pin, please say hi. I'm going to assume anyone with a DP button is receptive to complete strangers walking up to them on the max. I'm picturing a scene:

Damn, I was kinda hoping it would be true. :) 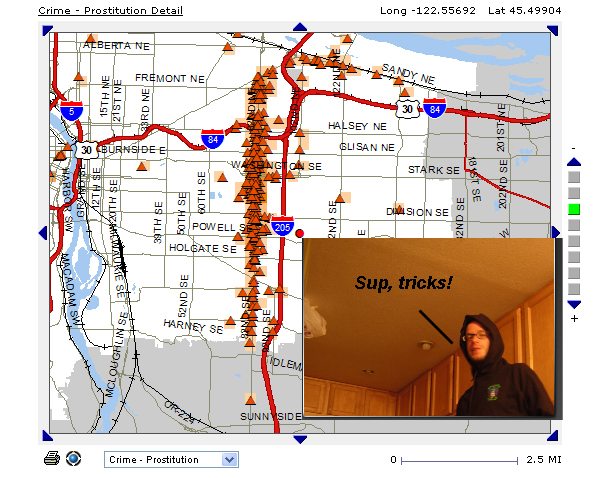