I am a canadian that wants to spend some time down in your city for the following reasons;

b) Your city just kicks ass.


Can you suggest any sailing classes or schools that I could go to for a condensed learning experience? I've taken a handful of sailing courses before but they were all in classroom...

Is anyone else still having issues with UPS? I was supposed to have a package delivered on the 18th, which is STILL supposedly delayed by the snowpocalypse. I'm finding this hard to believe at this point. USPS has already caught up with their backlog, surely their volume must be higher? I'm beginning to think they actually lost it.

In lieu of the bad economy and Amazon striking me down with crazy sales, my 250 gig portable hard drive is available for the super low cost of 60.00 bucks obo. It's perfectly shiny and cute and available for your media fisting/storage needs. 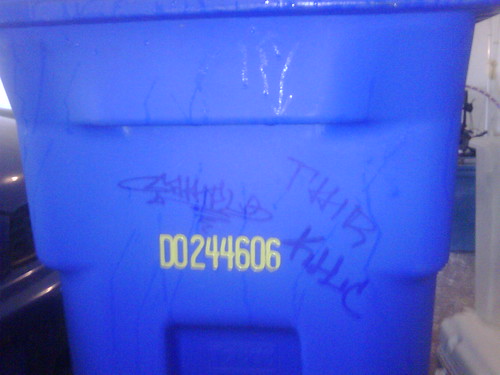 I am a 37 unemployed male in search of a room mate. I normally do contract IT and QA work but it has been hard to find anything right now and I can't work at Intel due to some idiocy from years ago. I am waiting to hear on a few jobs but I'm not holding my breath. I will be able to start claiing unemployment next month but that won't be enough to afford this place by my self. Things are looking like I may get a job in the next couple of months working from home though.

This is a two bedroom one bathroom (with a shower but no tub) apartment a block and a half away from the St. Johns Safeway. Walking distance to the 4, 44, 75, 16, and 17 bus routes. No dishwasher and it has a smaller kitchen. Washer and dryer on site but it is $1 for each. I am looking at charging $500 plus half of the electric (right now about $60 a month with two people currently living here). Rent includes DSL internet and Dish Network television.

Now for the painfully honest parts.

I can be a bit of a douche. I like people and enjoy hanging out with folks but when I am home I like to just be solitary for the most part. One night I may be very social and chatty, the next I could have no interest in talking to anyone. There is a big screen TV in the living room that I tend to monopolize since my computer and Xbox 360 are hooked up to it. It's the stuff that keeps me sane and from spending too much money at the moment. I also get weird about strangers in my home (An old apartment of mine was robbed in the past) but if they are your friends as opposed to some random person from the bar you just met I will cope.

The good stuff? I am a pretty decent cook and have a problem cooking for one person :) I enjoy card and board games as well as video games. I have a lot of friends in the neighborhood that any prospective room mate would get to meet and befriend as well if they so wished. I have a great cat named Tucker and he gets along with other cats and dogs so having one other pet in the place would not be a problem. The room that is available has an outlet for the sattellite tv so you can have a tv in your room if you want.

My current room mate and I are just not getting along and he is moving out at the end of January at the latest. My original plan was to move out as well but my landlord really wants me to stay so he is working with me so that I can find another room mate.

I don't care if you are male or female, gay or straight, young or old. I would like to meet any perspective room mate before they check the apartment out. Just spend an hour or two bs'ing and getting to know one another, talk pet peeves, that kind of stuff and then if we feel like we could get along you would be welcome to check the place out.

If this sounds like soething any of you would be interested in, shoot me an email at bizket at that google mail thing the kids are so hip on these days.

I have two options for New Years Eve

2. Working (I need money) with the boyfriend @ his restaurant until 1am and then head out for fun with friends.


What do you advise, oh Portland the wise???

What are you doing this NYE besides getting drunk? Where will you be to ring in the new year?

Has anyone had experiences - good or bad - with the new Cricket Wireless Broadband USB modem? They are advertising a $40 per month plan, you get a little modem that plugs into your USB and you can use it anywhere.

I'm considering going for this since I travel around with my laptop so much.

UPDATE: Nevermind - the download speed is only 700 kbps and the modem itself costs about 170.00 regular price. But I'll leave this up in case anyone else was thinking about this! :)

Hey DP,
I need some info about paper shredding. I have a shredder at my house but I have a HUGE box of stuff to shred and I would rather drop it off somewhere and have it made into  paper bits by someone else. Does anyone know of a place like that? I cant drop it off at work either since I got laid off... Please help

So, I was going to head out to an electronics store today and pick up some stuff I've been wanting - wireless keyboard and mouse, something to let me use/switch between two monitors (possibly a new graphics card, possibly a switch), possibly a portable DVD player - but was thwarted by snowpocalypse aftermath as I needed to have my car towed to the mechanic first (it won't start and I strongly suspect the alternator is at fault). I've been waiting about 9 hours for a tow now and the stores are obviously not going to be open by the time I'm done with this. (I'll be lucky if the BUSSES are even running by the time I'm done with this! AAA, this is a new low.)

Anyway, I have a ride to Seattle tomorrow and won't be back until 2009. My question is, do I:

I hate it when I do that.

fx4 uploaded some photos from the Christmas Ships parade and Peacock Lane lights, which I promptly linked to in a post on my LJ, and then I come to find he used the same photos on his LJ. The Nerve! Anyway, click through if you want to relive the cold snowy weather vicariously.

Anyone read or is reading the twilight series? I am on the 3rd book and have some questions...