Anyone in here know of fast and free webcam hosting websites?

Thank you to everyone who came out on Christmas Eve for the impromptu TV commercial showing! In case you missed it, we will be showing them again on January 26, 2009.

P.S. Oh, and thank you Baby Jesus for using your laser super powers to melt the three feet of goddamn snow and ice that my car was buried in all fucking week so I could partake of your sacred post-Birthday sales today at our most Holy Center of Lloyd, and take communion of your Feast of St. Julius, patron saint of Oranges, while worshopping you.

I hate to do this, but does anyone have a ticket to either of the shows that they need to sell?

I'm so mad at myself for not knowing they were playing, and apparently they are sold out on both shows.

That is the title of our (Aurora Chorus) concert that was postponed from last Sunday to today, 4 and 7 pm, at the Parkrose High School Auditorium, 12003 NE Shaver St., Portland, Oregon.
- To get there, take I-84 to the NE 122nd Exit. Go North (right, from the West - don't know about the other direction)to Shaver St. Turn L on Shaver, and the school will be on your right.

I believe that tickets at the door are $22 (it being a little late to order). Sorry that I didn't get anything out about this earlier - it's been crazy. It's a great show, and I hope that lots of people can come.

This should be obvious to all but the insane and the terminally stupid, but here goes:

THE SNOW IS NOT A MAGIC PIT!

When it's snowing and your dog poops, it's nice to think that the snow will freeze it into a nice little package, that it will be blanketed in white, and so there's no need to pick it up, but IT'S NOT TRUE!

One day, the snow melts, and where your dog pooped, a nasty pile of stinky, bacteria-filled mush remains. My front yard is covered with the stuff now, as is the sidewalk along the route I like to walk, the parks I like to visit, and the streets I like to cross.

It's everywhere. Portland is suddenly less dog-friendly and is instead dog-saturated. It feels like Paris, for f's sake.

Anyway, here's the long and the short of it. If your dog shits, PICK IT UP! Doesn't matter if it's sunny or rainy or snowy. PICK IT THE F UP!

And if your dog shat anywhere near SE 34th and Holgate over the last two weeks, come back to that hood and pick up any pile that might possibly belong to your dog. It's your responsibility!


any of you lucky bastirds live in one of these? 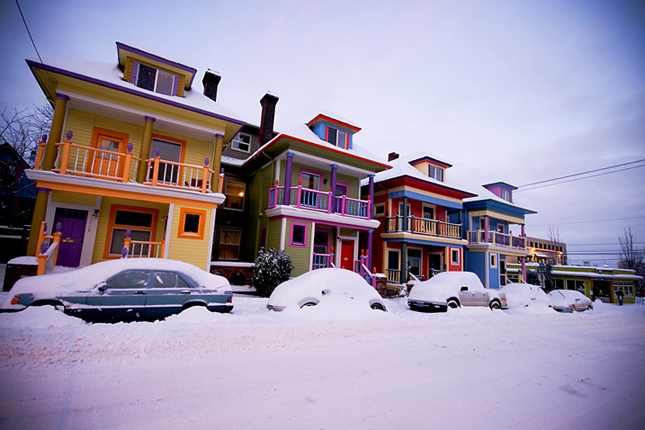 How does one resist the urge to start licking these houses in hope that they are made out of candy??

We now live under a cloud of crisis where debt is socialized and profit is privatized. It’s like Marxism brought to you by the House of Morgan. And we have Treasury Secretary Hammerin’ Hank Paulson to thank.

Like father, like son. Meet Merritt Paulson, the spawn of Henry Paulson. Yes, his name is Merritt. That would be like if Dubya had been named “Smarty” Bush.

Thirty-five-year-old Merritt, by virtue of hard work and hundreds of millions of family dollars, owns the Portland Beavers, a minor league baseball team, and the second tier soccer squad, the Portland Timbers. While his father goes through $700 billion of our money to bail out the banks, Merritt wants his own socialized crumbs from the community table.

He is insisting upon $85 million in public funds from the City of Portland to build a new sports complex for the Beavers and to upgrade the Timbers’ stadium.

Merritt, to be fair, is not the sole owner of the Beavers and Timbers; he has only an 80 percent stake. The man with the remaining 20 percent stake is . . . wait for it . . . Hank Paulson himself.

You can almost imagine the scene: the Paulsons in front of a roaring fire, lighting Cohibas with 100 dollar bills, ruminating on their $700 billion credit line, and saying, “What’s $85 million more?”

Keep in mind that Hank Paulson is worth $700 million on his own (he just loves that 700 number). The cash between the cushions at the Paulson family compound could pay for the new stadium in Portland, and yet Merritt wants more. He wants more, even though 16 percent of Portland’s children live below the poverty line, and the homeless rate in the fair city has nearly doubled over the last year.

Merritt Paulson has laid the groundwork for this budget grab by trying to present himself, in the best liberal Portland tradition, as a community-minded idealist who wants responsible development for the delicate Pacific Northwest town.

In an interview with Biz of Baseball—a website that shills with the aggression of an auctioneer for publicly funded facilities—Merritt said, “I think sports is such a unique vehicle in terms of being able to shine light on areas of the community that could use the help. It’s something that everybody relates to.” He also, as the perfumed love note of an article made clear, gave $10,000 to the local little league. This is a very modest investment if you have $85 million in public funds as an ultimate goal.

Of course, Merritt makes the case that the expenditure would be economic tonic for the community. But that’s not holding water, not even with diehard local fans. As Jules Boykoff, a former pro soccer player and a big Portland Timbers fanatic who brings his six-year-old daughter to the games, wrote in The Oregonian: “I would love for Major League Soccer to come to Portland. But it’s unfair to have working people and their families pay for the venture when the already cloudy economic future is anything but a sure bet. If Merritt Paulson’s affection for Portland is real—and I’m willing to give him the benefit of the doubt that it is—it’s time for him to step up and put his money where his mouth is. Should he do so . . . my daughter and I will be the first in line to buy season tickets.”

I think there are many others like Boykoff who will happily support their local sports teams but don’t want to feel like suckers in the bargain. We are living in a recession that will only deepen in the months to come. Asking taxpayers in this climate to give a multimillionaire a new stadium is bad enough. But when the request comes from the Paulsons, you really wonder whether we live in an era absent of shame.

Dave Zirin is the author of the recently published “A People’s History of Sports in the United States.”

Wow, I haven't posted in here in forever and a day, but I can't think of a better place to beg for peoples.I'm looking for a couple bodies for a 4e DnD game or a SW Saga game. We play near Lloyd Center, NE Portland, and are looking for a couple people to fill some spots that our more flaky players have abandoned. We're a laid back group who try to get together once a week or so, schedules permitting. All we ask is that you have a sense of humor, not be a rules lawyer and maybe don't steal anything from my house. That would be nice too.

Damned Snowpocalpse messed up my reading/posting schedule. Let this be the thread for discussing the American Gods, which I'm currently on page 111 of. I imagine I'll be done by the end of the month, but I'm not worried about yer spoilers.

So, discuss! I'm thoroughly enjoying this, so far.

I've been to the Oregon Zoo twice in the last six months, and both times, the sea otter was engaged in...er...extremely enthusiastic acts of oral self-love. While swimming, which I imagine takes some pretty impressive coordination, although being an otter probably gives one an edge there.

Apparently this is entirely normal for otters in captivity. But it still makes me giggle like a fifth grader--mostly at the idea of the many parents who end up having to explain the situation to curious kids. "It's...er...cleaning itself, honey. Let's go see the penguins! Right now!"

Posting here, because if anyone shares my juvenile sense of humor and schadenfreude, it's you fine folks.

Does anyone know if costco is stocking Wiis these days? We're thinking of getting one. Apparently they won't take phone calls about the Wii. Weird?

So who put the Santa hat on the Joan of Arc statue?

And, did anyone get a picture?

hey all you damn portlanders

i'm looking for a good chinese place, preferably in SE, and even better if it delivers, but those are not absolutes

Okay, as a native Oregonian living in New England I'm curious to this.
For those who are not from Portland, but moved in from out of state: how is Portland compared to your previous place.
Now, for those who were raised in Oregon, and Portland more specifically: Do you still miss Portland, and if given the chance, would you move back, or do you prefer where you are now?
Does anybody hate Portland, and how us Oregonians act, after moving here, and for those who moved away, do you hate how others act compared to Portland where you are now?

Personally, I hate where I am, this town is dinky, trashy and the people are generally quite rude. There is very little nature, and I miss Portland more than anywhere I've ever lived, it seems like "home". I'm just curious on what others think about the place.

So, I fail at life and need a sheet of replacement 20x28 glass for a frame (local, not online). Cheapest possible ever plz! I broke.

We're getting rid of some stuff, hopefully before the relatives invade on Tuesday. Want any of it?

Yes, we has a bucket.

Oh wise Damnportlanders...
I am needing to find a new doctor (my old family doctor is an asshole I've refused to go to for many years now.)
I am female and mostly just in the need for general check-ups and such. Nothing hugely expensive.
Female is a plus, though I don't really care as long as they're professional. Would also prefer a place that isn't crawling with children all the time.  Somewhere in the SE area is also nice, though not absolutely needed.
Aaaaaaaand....go?

Thanks to all in advance! :)
Collapse