Anyway, for those that went, what are your thoughts on the concert and how would you compare it to the With Teeth tour in 2005? I missed the 2005 concert so I can't compare.  Anyway, I thought the visuals were beautiful. I kind of wished I was in the back so I could see them better. I did find this tour to be a lot similar to the And All That Could Have Been fragility tour - especially now that Robin is back. Food/drinks were overpriced as always.  Song selection was perfect with the exception of Sin not being included.

I used to have my shoes repaired by this wonderful old Italian man downtown but he appears to have retired. Does anyone know someone who can repair some stitching on my favorite pair of leather boots? Downtown or north portland preferred but I am mobile and can travel.
Thanks!!!
I am trying to get rid of a Yamaha Electone Organ like the one pictured below. You would have to move the Organ yourself. Please contact me for more information.

Ok DP - I need your help! We suddenly have an ant problem. Luckily it's contained to a single counter unit *knockonwood* but we've gone from a couple ants occasionally to A HUGE FUCKTON of ants all the time. We've put out two different kinds of traps and they've been going crazy for them - and I feel recruiting more ants to come to the party. The traps are not working. At all.

I've scrubbed the whole unit and their entire trail with vinegar and cleanser over and over and they come back within an hour.

45,000 Photos taken by a Nikon D200. I dunno, if you excuse the creepiness of being gang-raped by your stuffed animals, this was well done.
Aside from Craigslist, where could one find a turquoise ring in this fair city?

Ok, this is going to sound REALLY ignorant but....

growing up in Australia what I knew about America was mostly learned from films until I moved over here.  Thus, your Christmases always seemed so magical, especially the towns in the U.S. which were blanketed in snow during the season to be jolly.

My question is this - I loved, loved, loved the depiction of the carolers in the movie Gremlins and wondered if folks actually do that?  I know pioneer courthouse has carols but that's too packed for me and I was hoping we have something more intimate, even community based (I'm in SE but I'd travel).

I'm thinking that caroling in my neighborhood would probably get buckets of water turfed at my head (I may be wrong lol) but I don't see folks doing this so I'm assuming it was all hollywood creating a picturesque scene but would love to hear back from you guys.

I love Christmas and all that goes with it (commercial or not) so if you know of any caroling etc that you can suggest, I'd love to hear. Thanks in advance.

I have a money order for a large amount of money (over $1,000). Due to a bad experience a few years ago, I do not have a bank account and I refuse to open one. The money order is from New York. Where can I go to get this cashed?

Don't go to Hoda's on Belmont. I was extremely disappointed with the food and service.

Lastly does anyone know where I can acquire a light bulb for my fridge? It's hard to see whats decaying in the depths of it without proper lighting. Thanks again!

Yes, I am being nice to you because I want something. A friend is looking for a dentist. No insurance, no plastic, so it needs to be someone who will take payments. Sadly, I have had dental insurance for a long time and so am completely useless in this department. Can you help? As far as I know, there is nothing serious going on and she is willing to travel a bit.

My wife and I are planning on moving to Portland (from Boston) in a couple years. When I tell people that we're moving in part to get away from the cold and snow, they usually say "It gets cold in Portland, too, you know!"

This morning when I walked my dog it was 14 degrees f. Does it get that cold in Portland? It gets this cold in Boston several times every winter. 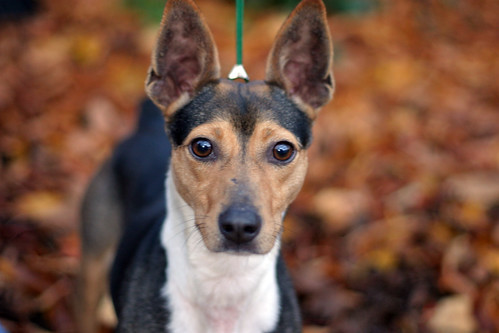 Last night in McMinnville we found a sable female Rat Terrier in a McDonald's parking lot, we're told had been there for 1/2 hour. She walked right up to our car at the drive-thru, and tried to get into it. The employees didn't see where she came from, but told us she'd been trying to get into every car that went there.

The McMinnville animal control is not open today, and the police haven't gotten calls about a lost dog. I live an hour from McMinnville, so have asked a friend to post flyers for me up there. We've not gotten her in to scan yet, but that's on the 'to do' list. Hopefully she does have a microchip. She has a worn collar mark on her neck (But no collar). We've posted craigslist ads, and are calling McMinnville area vets about her.

If anyone knows this girl, or hears of anyone looking for her PLEASE get in contact with me ASAP. I'd rather find her owner, or a rescue/foster than to take her to the McMinnville animal control since she may be pregnant and they'd put her down if she's not claimed. She can't stay here long because she's not small animal safe (I own pet rats) She's skinny, but has a distended belly so it's either pregnancy, or worms. I can't feel puppies though. She's had a litter before. She has identifying marks, which we'd expect an owner to identify (Unless she's chipped, and that would be enough proof of ownership)

By vote, our December book is American Gods, by Neil Gaiman. Second up was The Secret Life of Bees, which will hold over to the next round of suggestions at the end of January.

January's book will be The Audacity of Hope, with Botany of Desire holding over.

Some folks will plow through American Gods in a few days, and some won't. Would you prefer one (tagged if I could!) post for all thoughts to go on, or a weekly "jump in and spoilers be damned" post?

Does anybody know where I can buy medium to large quantities of food/tea grade lavender in the Portland area?
Just the buds would be best, but Im not too picky...

Thanks for your sage advice in advance... !

EDIT: Success! Went to Limbo and picked up half a pound of it!  Thank you so much :D

DP, I need your help - desperately. I am quite sick with the flu. I had a fever of 102 degrees this morning, and it's at about 101 degrees now. Here's the thing: I'm a college student, with two huge papers and hours and hours of Russian worksheets due Friday. But when I can't even stand up without feeling dizzy, how the hell can I finish those?

So, damnportlanders, can any of you recommend anything that has helped you get over an illness quickly? I'm doing the usual - juice, vitamin C, multivitamin, rest, soup, dayquil. What has worked for you?

Thank you guys so much.

This is one of my favorite places in the United States. It makes me so happy and the people there are unfailingly awesome.

Is there a similar place in Oregon (or Washington, for that matter?) It's such a lovely getaway and I'm dying to replicate the experience on the west coast.

For those unwilling to click - it's a hostel set in the woods in Brunswick, Georgia. There's a kitchen that provides vegan-friendly meals each night (with cooperative clean-up and prep), compost toilets, small cabins/treehouses with a light bulb and bunk beds but no other amenities, hiking trails, a pond, meditation center, etc.

i know there is a lot of shoe repair stuff in here lately. i have a specific question. i need the zipper replaced on one of my knee high dr martens. a lot of places ive found dont do zippers. i found one but it was 60 bucks for one zipper. anywhere that would be a little less expensive? if i end up having to replace the other zipper the repairs will end up costing almost as much as replacing the boots!

Given the book review post here. I did up this quick forum.

Let me know if anyone wants to use this. I can make moderators, or alter whatever ya like.

I just recently got my copy of Animal Crossing: City Folk for the wii, plus the speaker channel and stuff.

Anyone else wanna swap friend codes and trade fruit and things :)?

where do you go to buy fresh, local produce since all the farmer's markets are hibernating?

The power jack on my Thinkpad T40 is broken. I've replaced the adaptor, but it won't give me any power, and I've heard that I can blow out the mobo if it shorts. Does anyone know of a place, preferably metro Portland area, that will repair the jack? Extra points if it's cheap and/or quick.

Happy birthday, Tom Waits.
(And a very merry Tom Waits Christmas to you all.)

Question-
What do you think George W Bush smells like?

Lumbergh is on "Chuck" tonight.

It actually makes it kinda tolerable.

I'm looking for reccomendations for sushi in downtown, preferably around a max line, that isn't Todai. Good lunch specials and drinks a major bonus. thanks!

( You are about to view content that may only be appropriate for adults. )

I'm in need of a pair of red spandex shorts, any idea where I could find some? I've already checked with Joe's.

I'm bored so thought I'd post a funny video if you haven't seen it before.

Anyone know where I can find some/one? Preferably small ones, but really any at all would be good...
I've heard of a deal where you can get a cheap flight to see a dying relative of to get to a funeral service. Does anybody know where I could find out more about this? Is it just for relatives? I would like to make it to the funeral service of a dear old friend who died yesterday.
Collapse