Given the new cross platform ability of it, I have a question for Mac users.

My brother showed me this link that shows a highly interesting lecture given about the differences between conservatives and liberals and how we might all open our minds a bit more. It does start out a bit liberal-biased given the audience (as you'll see) but it gets down to some really interested reasons behind what makes us all physiologically lean left or right, the evolutionary science behind it, and cultural contexts which shape us. As someone who identifies as a liberal but really abhors the thought that conservatives are 'stupid' or 'unintelligent' I found the lecture to be quite enthralling. It gets at the heart of what I've believed all along - we tend to place different emphasises on what's most important to us. And in the end we need that balance. So anyway, I thought I'd share and start a discussion. I'm really curious and very interested to see what others have to say and see what discussions follow.

P.S. Sorry for not imbedding this. I'm not computer savvy enough to know how or if it'd even be possible to do it with this link. Doh...

I'm looking to play some good old school games, and I'm wondering what are some of your favorite NES and SNES games?

My mom is in ICU and she has a ton of cats. We need to find loving homes for them.

There is some Scottish Fold in their blood so a lot of them have folded ears. Others have giant bat ears. Please comment with a way to contact you and I will contact you this evening. We need to get them all homes very quickly or they will have to go to the humane society.

They grow up to be very loving cats, my little boy Sue came from there.


Pics of my kitty Sue (not one of the cats we are trying to find homes for but related to the ones we are!)

I need help finding the following:

1) Someone to darn a hole in my favorite sweater

2) You know that plastic sheeting that some people tape over their windows? What's the story with that? Where do you get it? Does it actually keep your house warm? Does it come with the tape to put it up, and will that tape hurt wood molding?
Hey! I get super bored at work, and all the fun internet sites are blocked... I am looking for people who are home and @ their computer semi regularly during the evenings/night (I work 3pm to midnight, m-f). I reside in Beaverton, grew up in Portland, am into all sorts of stuff, and am pretty neat. Comment or e-mail me bradley @ elitepea.com and we can chat and stuff.

For everybody that went to OMSI last night, what did you guys think? I thought it was great, but a little busier than I thought. I think the OMSI staff was surprised overall with the turnout as well. I can't wait for the next one, but I wish it was longer than 2.5 hours.

For anyone with an interest in dystopian science fiction, Greek mythology, or high-contrast graphic novels drawing from both, do consider attending the fine Sequential Art Gallery this evening for the First Thursday opening of Painkillers: A Myth of Modern Medicine.

For those wishing to watch the debate tonight before coming out to First Thursday, I regret to inform you that there will not be actual narcotics available to ease the pain, but there will be art. Scant solace, I know, but there it is.

1. Being gainfully employed in a stable job situation, even in recent economy.

2. Successfully avoiding the flu bug (so far) which recently made the rounds so far.

3. Warm and relatively dry (until this morning) recent weather.

4. Having accumulated 105 commuter miles during this year's Bike Commute Challenge. Awards party next Wednesday evening at Organics To You Warehouse!

5. Anticipation of the Greek Festival at the Holy Trinity Greek Orthodox Church this weekend....yay for cultural events (especially the folks dances, tour of the church, and the delicious pastries)!

Does anyone have a team for this league (specifically, Valley Lanes on Thursday) that they need another person on? http://www.underdogportland.com/bigturkey/index.asp

If not, do you want one?

I tried unsuccessfully to get my new Portland friends on board with this, but couldn't because they all hate me and suck, and I am and/or am not just saying that because most of them came from this community and will be reading this.

So if you have a team that I can be on, or want one. Let me know.

Does this look familiar? 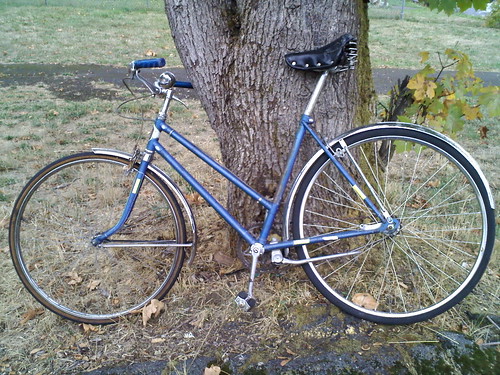 ( You are about to view content that may only be appropriate for adults. )

So, I'm coming off a solid 4 day flu and am feeling better and am ready for the trainwreck VP debate! Of course, this requires some deliciously awful Gas-Inducing Chinese Food ™ . We've decided to go with The Galaxy from Delivered Dish and want to know what MSG laden dishes you'd recommend.

I think this was posted the other day but here's a Palin bingo game for tonight's debate.

Does anybody have a Biden bingo link?

There have been a few posts so far, but what do people think of the debate?

I am trying to give a reasoned analysis, but all I can think is that Sarah Palin looked really, really dumb. Not that I disagreed with her positions...because I really don't know what they are.

Two things annoyed me: First her folksiness, like she assumed that she was "one of us". Nope, sorry, you haven't earned that.

Second, sentences like this: "we have to build infrastructure and rein in spending". If she has a magical way to get infrastructure without paying for it, she deserves to be president of the world!

But mostly, I think it showed what we already knew: Sen. Biden has a lot of nuance, and Gov. Palin has a script.
Collapse