I'm in need of a set of fingerprints to send with my application for my teaching licensure.  Aside from getting hauled into a station, what's the easiest/cheapest way to get fingerprinting done?  I know that in some states if you just walk into a police station they charge you a ton of money, and would like to avoid that if at all possible.

3G is live in Portland, anyone using the 3G network right now? I cant wait till 10/22 when I get the new G1 phone by google to be able to use the 3G.

Many of you work with customers. Many of you have common frustrations. I'm curious, what do I unknowingly do in YOUR job that pisses YOU off. (Maybe one or two things).
( Collapse )

RLP's studio is opening on Friday and I need to go look at HD Projectors to stick on our ceiling. I'm looking for the best place in town to go look at 'em.

Any other DP'ers out there still feeling the love from last nights Robert Plant & Allison Krauss concert? I tried to not get my hopes up so as not to be disappointed, but I went and got my hopes up for an awesome show and it was so much better than I could have dreamed!

I'm trying to make a scrapbook, and I'm not very crafty. I've done it before, with fairly amateur results. This time I'm kinda hoping there are some websites with template page layouts that I could sort of steal ideas from. Do any of you have ideas or links you can pass along? TIA

subplot and myself, who's going to OMSI tonight? http://www.omsi.edu/education/adults/afterdark/

It's time for my new every two and I LOVE gadgets so I'm pretty stoked.
I have the EnV right now, it looks like this
I mainly use it for internet/email/texting the thing is Openware or whatever proprietary browser that LG/Verizon used sucks big hairy man balls. I'm thinking about going to Blackberry, what do you guys think? Are the new LG's (Dare, blah blah,) any good? can I use a different browser? Can I get onto google with it?

I posted this on Craigslist. I need a new place to leave FAST because my living situation fell through. If you know of anything please let me know. Thanks!

I'm a professional woman whose housing situation fell through and I need to find a new place as soon as possible. I'm looking for something short-term (1-3 months) that's pet-friendly for $400 or less per month. I'm 29, fully employed, quiet, clean up after myself, and don't have tons of stuff (just about enough to fill a bedroom). I have two cats, one of whom is declawed, and both of them are friendly and don't have any behavioral problems. I need a place quickly -- by this weekend, if possible. I can pay first month's rent in cash up front, and I'm looking for short-term housing because I'm planning on moving back to Canada by the end of the year.

If have something available, please be in touch as soon as possible.

Anyway! I have a bridesmaid dress. It is waaaaaay big on me, so I need a tailor. Any recs? East side ideal but not mandatory.
On SE 63rd Street, on the west hand side between the roads of Flavel and Duke there is a box marked "FREE" full of bike parts and accessories.

GO GET IT. BUT PLEASE TAKE A LOT OF IT. I don't want my ol' roomies to have to deal with a bunch of scraps at the bottom of a box.

and take the mattresses too if you feel like it. ha haaa.

Registration Info
State: Oregon
Days left to register by mail: 13
Registration must be postmarked by:
Tuesday, October 14
Oregon is a "vote by mail" state. All voting is conducted through the mail.
Get information about voting in your state:
Oregon voter hotline: 1-503-986-1518

where can I get some old ones? should I just stick to Craigslist for this one? unless you DPers got some.

also, need something to desolder stuff

Is there a place in town that could fix noise-canceling headphones? The headphones themselves still work, they're just broken at the fixture which holds them up to the left ear.

So if I leave work to go see this game,
is anyone else going to be there?

/edited to ask if anyone knows if they
have wifi there?

Could anyone recommend a safe and reasonably priced offsite parking facility for the airport? I was googling and found Aipark for $54 for a week, and Thrifty for $52.50, but I was wondering if anyone had any personal recommendations, or advice on places not to park.

Thanks for your help!

So, I'm ashamed to say that in all the 17 years I've lived in Oregon, I've never actually been to a haunted house attraction. I'd like to change that.

Where are the most fun haunted houses in Oregon? The scariest? Which ones should I avoid?

Thanks in advance, as always =)

I need new treads put on my fav boots. Can anyone recommend an awesome (and affordable) shoe repair place that could work their magic for me? Or warn me away from the icky places.

As always, bonus points for west side of the river.

Cruxshadows is on the 5th at the Fez. Is there anyone interested in making friends?
I have finally arrived to Portland and I have been here for a week.
Still trying to get around but doing better. Trying to get to the otehr side of the river is a pain though... (I got lost and ended up in washington...state...).
clair_brodie@hotmail.com (if you want to hang out or meet or something)
Looks like the bailout will happen.
All I can figure is the Federal Reserve will issue more dollars that aren't backed up by anything (except weak speculation).
Overprinting money always equals hyper inflation.

Wont this hurt the average Joe more, than letting the lenders die off and losing access to loans we shouldn't be applying for anyway?

The Senate on Wednesday night passed a sweeping and controversial financial bailout similar in key ways to one rejected by the House just two days earlier. The measure was passed by a vote of 74 to 25 after more than three hours of floor debate in the Senate. Presidential candidates Sens. Barack Obama, D-Illinois, and John McCain, R-Arizona, voted in favor. Like the bill the House rejected, the core of the Senate bill is the Bush administration's plan to buy up to $700 billion of troubled assets from financial institutions. Those assets, mostly mortgage-related, have caused a crisis of confidence in the credit markets. A major aim of the plan is to free up banks to start lending again once their balance sheets are cleared of toxic holdings.

But the Senate legislation also includes a number of new provisions aimed at Main Street. The changes are intended to attract more votes in the House, in particular from House Republicans, two-thirds of whom voted against the bailout plan. The House is expected to take up the Senate measure for a vote on Friday, according to aides to Democratic leaders. The legislation, if passed by the House, would usher in one of the most far-reaching interventions in the economy since the Great Depression.

Advocates say the plan is crucial to government efforts to attack a credit crisis that threatens the economy and would free up banks to lend more. Opponents say it rewards bad decisions by Wall Street, puts taxpayers at risk and fails to address the real economic problems facing Americans. "If we do not act responsibly today, we risk a crisis in which senior citizens across America will lose their retirement savings, small businesses won't make payroll ... and families won't be able to obtain mortgages for their homes or cars," said Senate Majority Leader Harry Reid, D-Nev., moments before the vote. In a press briefing after the vote, Senate Minority Leader Mitch McConnell. R-Ky., said, "This is a measure for Main Street, not Wall Street. [It will help] to unfreeze our credit markets and get the American economy working again."

Just for the record: Ron Wyden voted "Against", Gordon Smith voted "For".

So i am not sure anyone here will be able to help me, but here goes:

last year i moved into an apartment with an acquaintance. We both signed a year long lease. Long story short, she decided to move out without giving me notice, leaving me with a bunch of her junk and unpaid bills. She never signed off the lease. i asked my apartment manager how to get her off, and she said the only way was to have her sign off herself (she said this was what the rental place who owns the apartments said). i was shocked that there was no way to protect myself in that situation.

Now i have moved out of that place, and i had luckily gotten a mutual friend to get her to sign off the lease. i turned in the lease, just because i wanted to get the deposit check in my name only, so i could get my money back. Well, i am not sure what happened as i am still waiting on an email back from my previous landlord, but i got the check the other day and her name is on it too. i know i can't cash it without her signature, and there is no way she will sign a check that she gets no part of.

All i can find is info on renter's rights when it comes to landlords. i see nothing about protecting a renter from his or her roommate. i have emailed a couple places that i think might be helpful, but while i wait i was wondering if anyone here has had a similar experience.

It's a lesson learned in trusting people but i'd really not like it to be a lesson that cost me hundreds of dollars. Thanks for any suggestions you may have.

Best moment at 2:30 or so, where Sarah Silverman says you can find out how to register while pooping. Gotta love her.

I found some footage of Sarah Palin's debate skills from years gone by. It's a good primer to help understand what she may be able to do tomorrow... 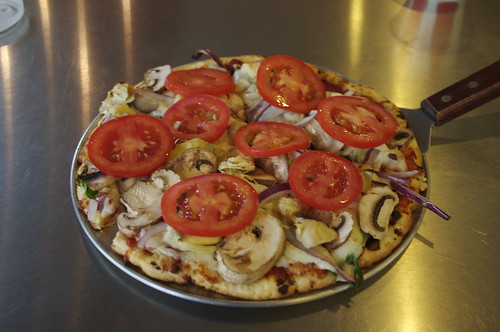 We were at OMSI After Dark tonight and

matrixleap lost his little digital camera. It's a black, Samsung 7.0 mp. We're going to call OMSI in the morning, but figured it was worth it to give a shout out to see if anyone here picked it up. There will be cookies in your future if you did!!