So, my roommate has a printer, and it's broken. We're looking around on the internet trying to find somewhere in Portland that he can get it fixed. It seems like everywhere we're finding charges near a hundred bucks an hour. The darn thing only cost 100 bucks. We know we can replace it for 100 bucks, but trying to be environmentally friendly, he'd rather repair than replace. The whole reduce, re-use, rather than replace.

So DP, who all is going to Nine Inch Nails in December?

Presale sold out so I am assuming I am not the only NINny attending.

I request a line party... in grand DP style.

So last night at game night; we were playing the "Would You Rather" board game. I realized that I hadn't posted one to DPers for quite some time, so thought I would today!

A. Be required to have sex with the same partner once a week for the rest of your life. This partner is "average" in sex quality. Will never improve and will never "blow your mind". You can't sleep with anyone else. But you always know what you're going to get.

B. Be required to have sex with a NEW partner every week for the rest of your life. You never know the quality you're going to get. And you can't/won't have to sleep with the same person more than once. No threat of disease/pregnancy.

Vote and discuss. Oh and answers are public on this one.

Open to: All, detailed results viewable to: All. Participants: 112

Would you rather be with....

I'm too lazy to make it myself. Where can I purchase some Egg Nog to use in waffles?

I have one adult ticket and one childs ticket for the Pirate Festival Saturday. http://www.portlandpiratefestival.com/

I will sell them BOTH to you for fifteen dollars because I probably can't go now. (I paid 22$ with ticket broker fees). Payment in person is best but I will take paypal since I am in Beaverton/Raleigh Hills depending on time of day.

The tickets are at WIll-Call but I can change the name of the person picking up.

( Collapse )
Thank you if you take these off my hands. My son was invited to a birthday party that day and I am car-free and just don't want to rush around to make sure we can do both. Too much work!

Out of all the fountains in Portland, which is your favorite and why?

Is there anywhere in Portland one might find curry ketchup? I know where I can get it online, but I need it now, maybe even today.

So you know those price tag guns they use at thrift stores and so forth (particularly goodwill)? The ones with the little (sometimes colour-coded) plasticky connector with the paper tag at the end? Any idea where to get one of those guns, as well as the tags to go with it?

My other half has decided that this is The One True Pricing Method and will accept nothing else (no stickers, staples, etc) for a theoretical "buy my crap" sale, most of which is clothing. We've tried a couple of craft stores and asked Mr Meyer but haven't found much except for this quilt gun thing which is close, but no tags.

Hello DP. Y'all are so very helpful. Dang.

Does anyone know about professional no-compete contract laws here? Like, are they legal and enforceable here?

Thanks. Seriously, this place seems to be answer damn near any question!

i would like to go, but will be unable to drive.  want to give me a ride?

I understand the sexual need that all humans have. Really, I do. Hell, I even understand a little voyeurism is fun every now and then.

But to be blatantly screwing mid day, in the open, and right in front of me while I attempt to study for my grad test is a bit more than distracting.

Oh sure, I could have moved to a different spot. But, this is my goddamn table and that is a very sexy hot pink mini skirt and your motions are hypnotizing.

So before you blow (pun intended) my chances at failing this test. Do my grades a favor.

Move to the bushes.

I'm going to be having some conversations soon that I want to record (permission of all involve being asked, you know how it is)

is it still easy to buy stuff to record conversations through the phone? I have a land line. any ideas where I can look to find tape recorders or whatever people used?

For those who read the Portland Mercury: You know the Slow Wave comic on the back page? This week's comic is one of my dreams.

edit: btw did anyone else see the sun around 7:30 last night and the moon at around 8:30? holy crap. I wish I could have gotten pics but my camera phone sucks.

One of our stops on our week long camping trip will be in Bend. Neither of us has been there before, so what should we do or see when we pass through?

What say you DPers?
Okay DP, need some advice.

I have an interview tomorrow and I get extremely nervous at interviews. Unfortunately that leads me to forget almost everything good about myself and stutter like a fool. I'm trying to avoid this, so I'm wondering:

Is it unprofessional to take a cheat sheet of sorts into the interview with you?

Just something that has maybe an example or two of when I went above and beyond expectations? Or that briefly lists my strengths and why I'd be a good candidate? I'm not going for some high end job, just a PT receptionist position (I do have reception experience) and I personally don't see anything wrong with having a cheat sheet, but I can understand why employers might.

Opinions/Interview Tips?
No one can agree on what the hell the weather will be for the next 3-5 days.

I'm tired and in pain and the ONLY thing that sounds good to me is a RED VELVET CUPCAKE.

You know what I'm talkin' 'bout. The kind with cream cheese frosting.

I'm at work near Tanasbourne and I'm wondering... Do any of you know of any bakeries in the area that could hook me up?

You've got to understand how important this is to me.

I have been feeling like crap for too many days. NOTHING has sounded good. And now... Now I have a ray of hope.

And her name is Red Velvet.
Where can I find one in the Southeast area?

my back fence is covered in these grapes: 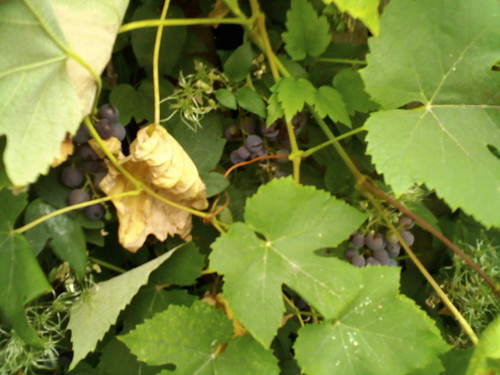 What should be done with them? Most of them are ripe right now. They have lots of seeds inside.
I need one. A really good one. Maybe with the tin thing on the side.

Preferably in the SE. COME ON DP :3

I'm throwing my boyfriend a surprise birthday party tomorrow but due to the lovely economy have no job and am on a tight budget. Looking for some CHEAP party supplies - like some of those crepe paper streamers and maybe a few other things. I already have balloons left over from god knows what. I'm thinking dollar stores may be the way to go? But maybe you all have some good suggestions for specific ones or maybe a party store that has ridiculously cheap stuff? I'd like to get just a few things to make the apartment festive, don't need anything out of the ordinary. But I'll love to do it for less than $20. I have a car so I can travel. Clackamas or the like might be a bit far, but I can get myself around if need be. Especially if there's some amazing place out there.

EDIT: Thank you again, everyone for your suggestions. I wound up going to a dollar store over on Western Ave right off of Beaverton Hillsdale Hwy as they were a tisch closer to where I live and happened to be open later than the others - 8:30. I got 4 bags of crepe streamers, a Happy Birthday banner, 2 bags of confetti poppers, a 'cake' kit which included a bunch of candles, candle guards AND a little pie server which surprisingly was sturdy and perfect for my lovely homemade cake whcih was QUITE dense between the layered cake sections and the THICK buttercream frosting. All for $8! And the birthday was a HUGE success. Perfect amount of people, he had NO idea and said it was the nicest thing anyone's ever done for him ever. I'm really really happy about that whole affair. So thank you again, DP! You rock as always!

take a look. There's nothing too exciting there, but it's kinda fishy that she was using a personal email account for state business.

Portland related because we care about mooses.

Is there a good reason for the Plaid Pantry delivery truck to leave it's engine on for THE ENTIRE hour or so that it takes to make a delivery?

I know this is DamnPortlanders but Seattle's community is not even close to being as wonderful as DP and I know a lot of you are familiar with Seattle.

I am heading up there tomorrow and have plans for Saturday and Sunday but nothing to do tomorrow (Friday) night. EMP and the SciFi Museum are only open until 5, as well as the Aquarium. We will probably not arrive until 3 or 4 so those are out. Does anyone have any suggestions for something fun to do on Friday evening? We have tons of places to get dinner in mind so we're looking more for some other fun activity or interesting places to visit (e.g. Archie McPhee's.)

Cafes that are open until 9-10 on Wednesdays that have comfy couches and don't mind a bunch of knitters (and a lone crocheter) sitting around for 3 hours? Preferably in the SE.

my kitchen sink has decided it would rather be a water feature. Can you recommend a good, relatively inexpensive, plumber? Seriously, one asshat bid $1500. Um no.

I have two tickets to the Tilly and the Wall/CSS show tomorrow at the Roseland. 18 dollars each. If you're interested, e-mail me at sweet_greens@msn.com

If you CAN meet me in East Vancouver to pick them up, that'd be awesome on my end, but if you absolutely canNOT for some reason, I'll go to Portland, but it won't be until after 8:30.
Collapse