Um, and in case anyone was wondering....

HANSON was the shit.

So yesterday I went to H Mart and impulse-bought some quail eggs. I saw Bobby Flay cook them on Iron Chef America once and figured it wouldn't be that hard. I stared at them for half an hour when I got them home but couldn't think of a damn thing to make out of 'em. I searched the interwebs for recipes but most of the suggestions I got were for omelets. WTF you crazy bastards... I only have a dozen. That is the equivalent of like, one normal egg.

Help me DP-wan Kenobi, you are my only hope.

Also, have any of you ever made the Pad Thai from the Good Eats episode "Your Pad or Mine?" Is it any good?
Hey there DPers, I was just wondering....

I'm planning on moving back to Portland mid-November, and I'd like to have a job lined up for me to start in December. Any ideas for places I should apply at? I'm 18, plan on getting into college once I'm there, and just have experience working as a dog bather and I'm working right now as a dishwasher. I already am keeping an eye out on Mercury, Jobdango and CraigsList and posted resumes, any other advice you guys? Thanks!

so i was out looking at bikes that would be best to ride to work and would handle going up-hill well. after some looking i came across the fixed gear bicycle. i mentioned it to my room-mate, who replied with a "no! don't get one! only bike messengers ride 'fixies'. they'll either steal your bike or fuck with it." i asked her why and she said that it was for no other reason than i'm not a messenger. honestly i find that i bit insane, but she's in with that circle and tends to date messengers that hang at </i>bye and bye</a>. that's an odd scene and i'm tempted to believe her... as utterly fucked up at that might be. any one heard of this before?

Everyone's favorite regional multi-talented one-hit wonders are playing a show on Friday at the Doug Fir.

No, I don't mean Hanson. That show was last night. And they're not regional. Duh.

I'm talking about Harvey Danger. You may know them as the band responsible for putting "that paranoia song", a.k.a., "Flagpole Sitta", into heavy rotation on MTV in the late late '90s. But they've put out several albums (OK, two more and some EPs) since then, their lyrics are literary and snarky and the music is tight.

Just puttin' it out there with more than my normal one day's notice.

Edited: forgot to close my a tag.

I am looking to purchase a used bike. My only requirements are that it be fairly lightweight, in decent condition (at least not requiring any immediate repairs), and good for riding around town. I would prefer to buy it from someone in North Portland as I'll probably be riding it back home. I'm looking to spend $150-200.

So, anyone want to sell me a bike?

I am a cancer fighter I have been diagnosed with Stage IV Malignant Melanoma that has spread to my entire body. Thankfully I am a good fighter and I am currently in remission of the cancer but the disease still plagues my life and those around me. I am working on getting a fund off the ground to help myself and others dealing with a disease that just is evil.   I have been given very many support options but it is still hard so that is why I want to start this fund we need something simpler than pages of paper work.

Please help me fight this please help fight cancer.  Kick in its teeth and make it cry for mommy, hit is with a  disruptor array, break the door down and take names what ever it takes to destroy cancer I will do it.

I have a donation button via paypal on my profile page and thank you very much for simply reading this and if you can donate something it would help a great deal.  If you have questions about my cancer or anything else please just write me.

So my girl and i are planning on moving to portland in the next year or so. What can you guys tell me about vancouver, how far is it from portland, and how is the public transportation from vancouver to portland?  thanks you guys!

At some point I saw an awesome music video for Radioheads' .everything in its right place. It was all black and white, mostly slow motion and involved an airstream trailer of sorts. I love that video. I went looking online for it recently with no luck. Any DPers know what I'm talking about or know where I can find it again??


nevermind: i was thinking of a different song after all. thanks :)

( Collapse )
By a show of hands. How many people lie and say they have no money on them when asked for it on the streets of Portland (or anywhere I suppose)?
This was filmed locally in Astoria and Seattle and I helped out a wee bit in the initial stages of the production. It also played last year's HP Lovecraft Festival. The times aren't listed on the theater website yet but I am presuming 7-ish and 9-ish time slots. It is also debuting on Friday at the Landmark Metro in Seattle and the Plaza Theater in Atlanta, GA.

Oh, and welcome home to the end of the world.

“Fabulous – the essence of Lovecraft…maybe the best Lovecraft adaptation I have seen to date.“
-—S.T. Joshi

A friend wants to visit the Oregon coast for a few days with her husband, but they don't have a car. What options are there (bus?) to the coast...and what towns can they get to that way? I would love to be able to give them some options, but we have a car so that is the only way I have gotten there.

I am thinking about taking a psych class this term, but am torn between psy 101 and psy 216. I really want to take psy 231, but 101 and 216 work best for my work schedule and location.
Any recommendations?

Dog parks on the west side besides washington park?

1) a dear friend of mine from out of town will be visiting very briefly.  She'll be coming from the west and I'll be coming from the east and we want to meet in the middle.  And that's where all of you lovely DPers come in.  I think the middle might be vicinity of Washington Park (technically, halfway is on Cornell at Upper Macleay park/Holman park).  Is there a place we can go that we can maybe sit and catch up and have a little privacy (nothing illicit going on, just catching up on years of apart so we might have some feelings showing).  (And yes I know I am woefully behind in the exporing of the city, at least that part of it west of the river.)

2) so, it seems my kitty's belly really likes tripe.  and i like tripe if my kitty's belly likes it.  But so far I have only found it canned.  I saw it once at Freddies but now they say they don't carry it anymore.  Certainly there are places in pdx where non-canned tripe can be found...anyone know where?

thanks for all the feedback. i actually didn't know a lot of that stuff. a fixie was just apassing consideration for me. i'm used to tougher mountain bikes... with brakes. i'm definitely NOT a hipster (whatever that is) and don't like any labels. anyways, bike messengers are really awesome in their great awesome world of their own. i'm sure they get paid wonderfully for being rad... especially with those handbags. so hot. no offense to non-asshole BMs or people that classify themselves as hipsters. i know a hipster when i see one and have been mistaken for one myself and that's the ironic humor i find so amusing about the repeated mention of hipster herds mooing through the fields of portland.

edit: by the way, i'm referring to the post i made the other day. sorry to not specify.

So what's on fire around Salmon and Water?

wow there is a huge fucking smoke plume. I can see it from where I am right now in john's landing to the north, but i can't see much more than black smoke.

3-alarm fire at the Empire Rubber and Supply building on the corner of SE Water St and SE Salmon St, basically between the Morrison and Hawthorne bridges. The smoke is affecting rush hour.

Are there any really great campsites in Oregon (preferably not in Southern Oregon) that have good swimming areas?
My boyfriend and I have a few days off and want to go camping.

This isn't necessary but I would really like it if the campsite had showers.

Hi, I'm a college student looking to rent a room. I'm hoping for Sellwood or SW (Lewis & Clark area). Anybody have any friends who may have a cheap room who doesn't post on craigslist? I've looked all through there already. Haha. I doubt anyone here has friends who wouldn't post on Craigslist though... but I figured may as well give it a shot.

Anyone have this happen? Just recently LiveJournal is looking all wonky on my FireFox3 browser.

I've a good anti-virus, ran SpyBot, hijack this! etc. Haven't done a uninstall/reinstall yet though. If anyone has some insight, it would be much appreciated.

My sunflowers are being molested. 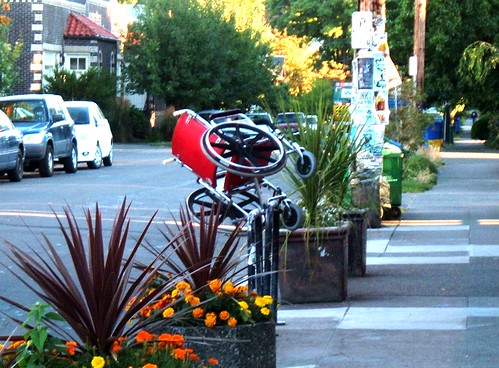 My sister is visiting for the week and has a craving for cheesecake. Where should we go? Bonus points for walking distance from Hawthorne and for places allowing minors after 9 pm.

In other words, do The Pied Cow or Rimsky's serve cheesecake? Alternately, what's the best frozen cheesecake?

I'm looking for an article/story about Portland that was probably published in the last few months and starts out with a lead showering flattery on Portland using some selection/combination/sentence like:

If mixed-use development (or urban planning?) was a buzzword/"it" word, then Portland is the new "mixed use."

I'm almost positive that it was an if/then sentence structure and that it used the phrase "buzzword" or "'it' word" and some other word/phrase that is a buzzword, but I've been wrong before. I've been wrong a lot, actually.

Someone else has to have noticed a cool lead, right? No? Just me? OK then, well, I'm trying. And I can't speak for the rest of the article because I don't remember it much (blinded by the lead?), so if it offended the hipsters or insulted Widmer Brothers, I'm infinitely apologetic.

I have a 2006 Ford F-150. I also have a severely overweight/obese stepdaughter. My stepdaughter cannot buckle the seatbelts in my truck. I do not wish to get a ticket for lack of seatbelt wearing.
I have tried the auto supply shops and they don't have extenders. Can someone reccomend a place for me to get an extender so my stepdaughter can buckle a seatbelt?

Does anyone have a strong opinion on which is better between LibraryThing and Goodreads?