I've never made a DVD before from a Final Cut Pro file. I've got a raw movie just over two hours long that will not, no matter what I try, fit onto a DVD without losing an inexcusable amount of quality (we're talking ugly, pixelated gradients). Does anyone know good compression/exporting settings that will give me a watchable DVD? I figure Kinkos or something similar may be my only option at this point, but even still - I'd have to hand them a 10G+ file to get anything of quality.

I need a dress.  I know what I want, and I cannot find it online and have never seen it in a store.  I can describe it in great detail.  I don't think it will be terrifically complicated to make.

Are you an amateur seamstress (or seamster) who could work with me to create this dress?  I am looking to spend around $100 including fabric, and I think a professional would probably charge more, hence the wording of my request.  If you are interested, drop me an email: arandombox at gmail dot com.  Or if you just have a reference to someone you think would be great, feel free to post here.

I'd be happy to model it for your portfolio after you create it :)

The Independent Film Revival folks are showing "Foxy Brown" tonight at the Broadway Theater, 7:30p showtime. Only $5, which is cheaper than the matinee price these days!

The IFR folks said "bring booze" on their bulletin this week, but that can't be right. I'm sure they were just being funny.

If you show up, and see me, say "hi" or buy me some popcorn or somethin'.

A few friends asked me to recommend a hotel for them while they come into town for a wedding in August. Have grown up in Beaverton, I've never stayed at a hotel in Portland, and therefore have little to no opinion on the matter. While I don't think they're looking to break the bank, they're also willing to pay for a room with some character. Any one have any suggestions where they should stay? Let's stay in the downtown Portland area, but a variety of price ranges are fine.


Oh, and my friend mentioned finding a hotel near voodoo donuts, any idea which one she might be thinking of?

whats a good cheap webcam that would be good for vlogs? i gotta get with the times.

My fiance and I are thinking of going down this year. I've never been, and he hasn't been since he was 17. We're too late to get tickets for the campground we wanted (Darling Reunion, sold out) and the tickets were pretty steeply priced for us anyway ($43/person for the weekend).

Does anyone have recommendations for good places to camp nearby that are not "official" campgrounds? We don't mind rough camping, bringing in all our drinking water and toilet supplies, etc. But it'd be nice to be near some other people and opportunities for night-time gatherings, music, big fires, etc, since I understand the fair itself closes down fairly early. We're not looking for family-friendly.

i would like to have some potted flowers on my window sill. i am looking for something that is fine indoors with lots of sun. suggestions on what would do well? and where to get them? (fred meyer and safeway didnt really have much of anything and they were half dead)

We're getting relocated to Portland very soon, and I'm looking for a somewhat cheap 2bed in the NW area. Any ideas, tips, or warnings?

Has anyone eaten here yet?? I must try it! 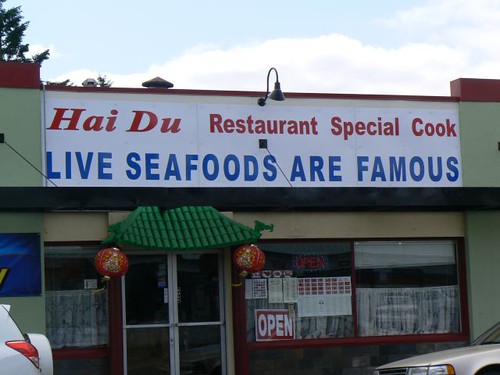 It's on Sandy somewhere above 60th...

Hey DP, I'm making a supervillain/conquering the world themed mix CD and I was wondering if you could help me out.

Do not want!:
Songs about good triumphing over evil
Songs about simple murder/theft/asshole-ishness (not evil enough!)
AC/DC

Do want!:
Stuff like Dr. Steel and "Skullcrusher Mountain" by Jonathan Coulton
Songs in which the bad guy wins, preferably in flamboyant fashion

Does anyone know where one can go and hear Celtic music played live in Portland? Even better, does anyone know of any groups of anything where people can sit in and learn and participate? (Irish Celtic, American Celtic, both are fine.)

Howdy.
The other night, we had an older looking customer at the Thai restaurant I work at in Sullivan's Gulch, and he said he used to eat there when it was an ice cream parlor 50 years ago.
And I'm a bit of a geek about historical buildings and whatnot, so...
I remember someone here posted a link years ago to a site that allows you to look up old billing records for various Portland addresses.
It would probably take days to find that post, so I was wondering if anyone knew where that website was, or any site with 1950s/60s era pictures from around the SuGu 'hood, specifically along Broadway...OR knew of any ice cream places in that area at that time.
Thank you, drive thru..


Edit:Besides Farrell's. This place would have been open in 1958, Farrell's opened in '63. I should have mentioned that it's specifically NOT the Farrell's building(which I miss greatly)...my bad!
The building I'm talking about is at
2015 N. E. Broadway, which is a few blocks east of Farrell's.


Second Edit: The original Farrell's was also on Burnside, rather than Broadway.
I want to make my boy his favorite stew his favorite way: in a bread bowl.

Except I have no idea how to prepare a bread bowl. Google, while having many different recipes of what to make IN a bread bowl, has failed me with lack of ways to make one.

I'm thinking cut off the top, carve it out, and put it in the oven set on broil for a few minutes to get it nice and crispy and able to hold stew.

But for how long? Anything else I can do to spice it up a little, make it prettier?

. . . can I find copper garden rings? Or, hell, copper flashing from which to make rings?


Seriously, why is this not a popular thing here?

Edit: Copper garden rings are flat strips of copper that have been bent into a ring. They are placed around the base of plants to prevent slugs and snails from eating the leaves of the plants. These bugs will not cross the copper barrier because of the chemical reaction it creates with their slime which irritates them, or so I read somewhere once.

Hey, do any of y'all know what's a safe product to use to clean my scanner?

Due to various art projects and me being dumb about waiting for things to dry, I've managed to get it pretty smudgy and/or fingerprinty and dusty in the past few years and I'd like to fix that so my pics don't come out all gross online.

Any tidbits of advice?

Help! I'm going to be homeless come August 1. I NEED TO FIND A PLACE TO LIVE. Studio apt, shared housing, cardboard box (with WiFi), etc. Besides Craigslist, apartments.com, rent.com, where can I look?

But hey! If you're looking for a roomie! Adopt me!

Also, my Anony-Perv called himself out and it's likely I won't end up in the back of some white van. Thanks, DamnPortlanders! :D You're pretty. You know that, right?

Anybody know of any good time-wasting videos to watch? I'm about 10 minutes into an hour or so of document scanning at work, and it would be nice to have something to watch to get me through the monotony. I've already been through most of superdeluxe.com and homestarrunner.

Does anybody say "and go" anymore?

::edit::
monotony has passed. Thanks for the vids.

What are you eating tonight,

This recipe is vegan if vegan "chicken stock" is used.

What does one do when their bike is locked up with a Kryptonite U- lock and the keys have been lost?

The keys weren't registered, the iron fence it is locked to isn't moving, and we have already tried sawing off the lock.  Does anyone have the equipment to get it off for us?
Collapse