Hey, remember I posted about making a PDX rideshare LJ comm to be a little less sketch than CraigsList?

Well, here I am saying I NEED A RIDESHARE cause I don't have a car and am not sure I can get from my job to the train station to catch the Amtrak in an hour

Is anyone headed to Seattle next Friday after 5pm?

Can anyone make one like this but with John McCain?

I want some Russian food. nowwwwww. Borscht, kapuski, pelmeni, etc. Where can I get some?

Just came across this: http://www.nationalflipflopday.com/

Never heard of Tropical Smoothie, and it's limited to the first 500 people, so who knows if they've reached that. But it's worth a shot. Theres a location on Burnside:

My Camry was stolen on the 21st of April from the corner of 15th and Kearney in the Pearl District (in broad daylight, no less). It was missing for a total of six weeks (during which time I had pretty much come to terms with the fact that I was never going to see my car again), and miraculously, at around 10pm on the 2nd of June, I get a call from a police dispatcher saying that they found my car. She let me know where it had been towed and gave me the number. I called the tow place and confirmed its whereabouts and went to pick it up the next day to the tune of $134.

All was well (aside from grieving for all my shit they stole, but that goes without saying...) until the next week when I get a citation in the mail for the Camry being an abandoned auto. It's dated for the 2nd of June at 1:50pm and the bail is $280. I intend to fight it. I have the police report from the night it was stolen, and the receipt from the tow company saying when it was towed and when I picked it up. Apparently my options are to A) mail in the bail and call it a day, B) mail in the money with a letter and any "proof" saying why I don't think I should pay and then they get to decide if I get all, some, or none of my money back, or C) request a court date where I have to have the money with me and explain in front of the judge why I don't think I have to pay.

This is the third time I've had a car stolen but this is the first time I've ever received an abandoned vehicle citation. The first time my Honda got stolen I was notified by the police dispatcher and I went to pick up the next day...no abandoned vehicle citation. The last time the Honda was stolen the officer who found it called me and told me she'd found it and since I lived about five blocks from where it ended up she said she'd save me the tow fees if I just came on over to claim it. Again, no citation was issued. Believe me, I really wanted my car in the six weeks it was gone, and why would I punch the drivers side door lock, pull the ignition switch out, and brutalise the dash in an effort to remove my dope stereo system?

Do any of you guys/dolls have any insight into anything like this? I'm reading the policies and regulations and stuff regarding anything even remotely car-theft-and-recovery related, but all I really want to know is if I do try to fight this can I get out of it or should I just pony up the dosh and move on without wasting my time (and if I do have to pay, I kind of want to call the Willamette Week or the Mercury and see if they'll do a story about my outrage)?

No longer have a need for this awesome rack setup since the new car has a factory rack already. Originally bought this rack system for my CRX to take up to the mountain snowboarding. Here are the specs:

FlatTop 4 - Gator style ski/snowboard carrier that holds up to 4 sets of skis or 2 snowboards. 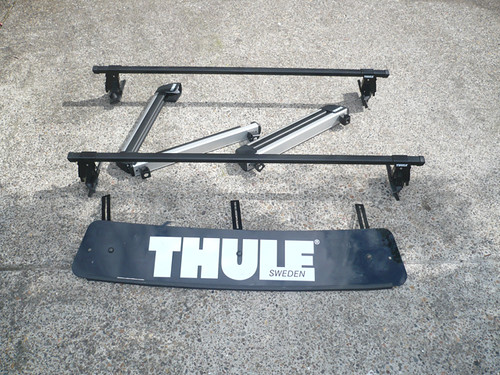 I have some apartment security deposit questions.

We moved out of our last place over a month ago. It was a month on the 18th. We were told by the owner of the building before we moved out that it was his practice to get security deposits back within 2-3 weeks of the move out date. I know they legally have 30 days, so I tried not to get frustrated when the 3 weeks came and went. We tried contacting the manager of the building, but he was hard to get a hold of b/c he's been in and out of the hospital with cancer related issues. He finally responded and said that we should have it by the end of that week, which would be the 14th. We didn't have it by then, so we emailed the owner of the building to see what the deal was, and he told us that it was mailed it the 13th. Then we received an email from him saying that it was returned to him b/c he forgot to put our new apartment number on the envelope and that he would send it off immediately, that was the 17th. Now, this check is not coming from across the country or even across the state. The owner has his business in downtown Portland. Our current residence (and prior, for that matter) are located in NW Portland. Mail should not be taking this long to get to us. Needless to say, we have still not received the money. It has not been over the requisite 30 days, and I'm at a loss. There's a chance that it's still in transit. There's a chance, although slim I'd like to think, that it's been lost in the mail. Both the manager and the owner have our new address and new apartment number.

Do we have any kind of legal recourse in this situation? Should we just continue to wait or try to contact the owner again and let him know that we have not received it yet?

I'm breaking out in hives and don't know why. Anyone know how much allergy tests run?
Collapse