You guys tried this yet?

I'm looking for recommendations on bike stores that have a lot of smaller bikes on hand to test ride. I'm a 5'3" girl, and I want to find something that will mainly be used for daily commuting, but will also be durable enough for occasional long distance rides and carrying gear for camping trips by bike. So far I've looked at City Bikes and Community Cycling Center, and I've been perusing Craigslist daily. All three places seem great for girly cruisers or tall people bikes. but what I really need is a chance to try out lots of different bikes (sturdy road and touring) to get a sense of the fit and style that works best for me. I'm hoping to buy a used bike, but I might go for an inexpensive new one if I find something great. I don't need anything super fancy that will just be asking to get stolen. Where have you had luck, shorties?

Open to: All, detailed results viewable to: All. Participants: 113

Always inappropriate--it does nothing but reinforce negative feelings between races
27(23.9%)
Sometimes appropriate, but generally not
22(19.5%)
It can be funny, but sometimes go too far depending on the situation
55(48.7%)
Always funny. We need more in order to get over racism.
5(4.4%)
I hate black people anyway, so what do you expect?
4(3.5%)
Feel free to leave any thoughts you have on this.

Who wants to do some guerrilla gardening with me?

Apparently I can't cash my paper stimulus check because my new address doesn't match my I.D. Anyone else had this issue? I really need to cash this check!

We have this giant "plant" in the garden. And it's definitely not rosemary. We can't decide if it's something good or just a weed. It's just getting bigger and bigger. We had the biggest dandelion in the WORLD for a while, so it's highly possible this is nothing.

What do you guys think? 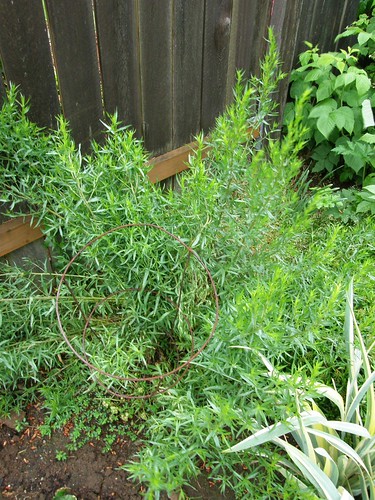 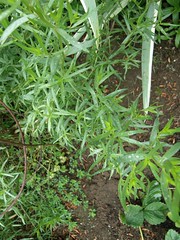 Thanks for your help!

It's not too late to purchase tickets for Pet Aid 2008. Courtesy of 94.7fm, this year's Pet Aid will be held at McMenamin's Edgefield this Friday, June 13th @ 6pm and will feature Spoon, Presidents of the United States and Nada Surf.

General Admission is $33 and $2 from each ticket will benefit DoveLewis and the Oregon Humane Society.

Even if you can't afford the ticket price or can't (or don't want to) make the show, consider donating a few bucks to these worthy causes. Both rely on donor generosity to maintain programs that care for thousands of injured and relinquished pets, as well as strays and injured wildlife.

Well I finally made it to the Sock Dreams store yesterday. Never having been out that way way, it took going back & forth on the bus a couple times before I spotted it.. but hey, at least now I know where Hotcake House is, if I am ever in SE again.

I got lots of cool socks & some cute little sock garters. Spent way too much, but being able to see the socks in person got me excited.

I dedicate this song to:
Little Blue Dog

Lokidecat(however you spell it) w/e

I've been frying my hair with bleach and funky colors for the last couple years (Unhealthy as sin, I know, I know) and I'd like to get some good conditioner in an attempt to get it healthy again. I'm willing to pay. I've been using some Burt's Bees regenerating stuff for the last few months but it's not quite doing the job I was hoping for.

Anyone have any personal conditioner recs, especially for those like me who've put their hair through the wringer?

Did anyone go to the show last night? How was it? I'm broke and working doubles this week so I wasn't able to go. Their new album is the shit.
Congratulations Portland. According to a new study, published in the new Cosmo... Portland Oregon is among three cities (Denver and San Antonio) that practice the safest sex. The study found that most condoms and OTC contraceptives are purchased per capita in those cities.

YAY! So while we may have skanky skeeves who come out when the sailors are in town, at least they're likely well protected!

I'm looking for chiropractic recommendations. Do you go to a chiropractor that you're really pleased with? Do tell!

The last guy I saw moved his practice to LO, so I'm in the market for a new one as my back is totally spazzing out lately. I can go just about anywhere, as long as it's accessible by bus. However, the closer to the river, the better.

The Dreaming are playing their first show in portland this wednesday!
Legal advice, DP? Bastion of all knowledge?

So, I'm getting divorced, how exciting! I got served the paperwork, HOORAY!

Now. I don't contest anything on there, it's all what I want, no other payments etc. Do I have to send in a response? There's something about a dismissal date in november if i do nothing, but the paperwork also says if I do nothing, he automatically wins (which is fine with me) So...do I do anything?

I know how ridiculous the housing questions get... so I've been trying to locate the info on my own, but I'm starting to pull my hair out.

I SWEAR I remember someone posting information about a pet friendly rental agency, but I can't for the life of me remember what it is.  With a virtual zoo (two large dogs and two cats) my friends and I are having a hell of a time finding a house to rent that isn't in the suburbs.

Does anyone know what I'm talking about, or am I just making stuff up?!?

This video is sponsored by an online "university." Portland-related 'cause we have lots of teenagers pushing double-wide SUV-strollers.

Anyone have experiences-- positive or negative --with any of the following garages? My Forester appears to be having engine troubles...

Because, you know, the "dap" or "pound" is a secret sign of solidarity for all those who hate America.

Edit: for those of you who don't know the reference, the Obamas did it on nom-nom-nomination day, and the folks on Fox News tried to portray it in the worst light possible. Search for the phrase on Goohoo to get all tha det's.

Wasn't there a post earlier where some body said her "mother" "won" a plasma TV and she wanted to sell it to us all? Did it get deleted by mods for obvious hotness, or did the poster withdraw the amazing offer?

Portland related, because the English like tea and so do 34% of Portlanders. Ok, I made that number up.

Anyone here a transplant from Seattle that wouldnt mind me picking their brain?
Collapse