Looking around the net for a few statistics, I came across this little tidbit from the city of Portland's Auditor's office. I thought that it might interest some of you.

If you need an elevator, this is why it's so hard to find an apartment in Portland.

I've got a .mov file that I'd like to burn onto a number of DVDs to give to people who'd like to just pop them into their DVD players.

Hey guys...a dear friend in need is wondering about food banks in the North/Northeast Portland area, does anyone have any info on locations and hours? Your help is greatly appreciated.

Authors of: “Venturing in : Quests for the Modern Celtic Soul”

SLIDE SHOW PRESENTATION. Venturing in Ireland showcases an irresistible collection of true stories that transport the reader to an Emerald Isle of dynamic, youthful jubilation, folk music-filled pubs, and coexisting modern and traditional cultures in a land where ancient stone tombs predate the Pyramids. This anthology explores a variety of aspects of life in southwest , from luxuriant gardens to local stout breweries, from castles and ancient ruins to whale watching in the . The writers plunge into the core of Irish culture, singing folk songs at a pub’s roundtable and set dancing in a small town’s hall. From to Mizzen Head, they delve into the cultural riches of the Irish countryside, even meeting local nuns with an expertise in ancient stone circles.

is the tilt-a-whirl still missing from oaks park? the last time i went, i had nothing to do except slide down the big pink. it was horrible.

does anyone know if the tilt-a-whirl is back or is ever coming back?

So I was wondering if anybody could tell me the best place in Portland/Vancouver to adopt a kitten. I'm looking for a young one... less than 3 months old... preferably from a shelter. And to be more specific... short-hair female :) Thx!

Today I was parked in front of the Art Institute downtown, and there is this guy on a bike blocking the road. There was a pretty little bird that was in the road. I grabbed a box from my trunk and we put the bird in the box. I told him I would take care of it. We thought it was a "tame" bird because it let him pick it up.

So, I drive to the pet store and charge up about $75 for feed, cage, etc. for "Davis" (so named because I found him on Davis Street). I then drove home. By then, Davis had rested up and it turns out he wasn't "tame" afterall, just stunned. He got out of the box and started flying around my office. Took us FOREVER to catch him. I put him in his new home, and he was NOT a happy camper. He had obviously never been in a cage before. We started looking at him and realized he's not tame at all, but probably a wild bird. A very pretty wild bird. So we took him outside and was very happy to fly up into the tree & then off into the wild blue yonder. So now I wonder if I have the bird flu, if I illegally transported a wild bird across state lines (to Washington) -- joking -- and I also have a $50 cage to return.

I hope I did the right thing! He didn't know what to do in a cage, and he seemed very happy when I took him outside to set him free, he was tilting his head and listening to the other birds... I think he had flown into a window and was stunned for a bit, then came back to his senses in the box in the back of my car.

Pictures of Davis behind the cut...

Hi. Has anyone ever taken Amtrak Coast Starlight from Portland or Seattle to LA? How was it? It takes 30 hours. I'm leaving Friday afternoon.

So what's going on this weekend? Me and my dude are coming to town. Where's a good place to look for pdx events?

EDIT: We'll be there Saturday through Tuesday. Thanks! 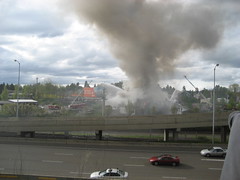 Something tells me that you don't really want an old fuel depot to be on fire. Certainly smells interesting though.

I'm finishing up a short film and need a pianist to record a bit of score for the opening shot in a jazz/lounge style. It would probably be about 3 minutes worth of music. If you're interested, email me at James at Overthought dot net and I can give you more details.

Quick! Where can I get wood or metal picture frames in bulk? I need to buy about 20-30 simple 4x6 and 5x7 frames, like those that retail individually for about $5 each, for more like $2-3 each.
I won a radio! And you didn't!

So, I'm not usually a big YouTuber. I never watch the embedded videos posted here and when a friend sends me a link I usually respond with "hahaha, that was funny" without actually watching it. (kind of awkward when it turns out it was an inspirational Obama speech or something.)

But I totally have a penchant for the fake, mash-up movie trailers, where someone sets the audio track for one movie to scenes from something else entirely. I love the Toy Story Requiem, and my roomie just showed me Family Guy Enters the Matrix.

Anyone have any other funny fake movie trailers?

you know what really sucks?

A list of ballot drop sites in Multnomah County

A daily tally of voter turnout in Multnomah County

I was in Subway a few days ago getting a sandwich, and they had a life-size cardboard Jared holding his fat-pants up in front of him, smiling. You know, the guy who lost 200-something pounds eating Subway sandwiches and did commercials and became the Subway mascot-celeb. This guy...

The cardboard Jared's eyes seemed to follow me wherever I went; as I entered, as I was ordering, and as I left. It was really creepy and disturbing. Has anyone else been leered at by Jared?

Oh yeah, also, to make sure this post is topical for dp: I had a footlong pastrami on wheat, with pepper jack cheese, green peppers, cucumbers, tomatos, and olives. It was affordable and delicious!

Anybody know where a person can get ceramic magnets? (Specifically ones that are 5 cm x 2 cm and 1 cm thick.) A coworker of mine is looking for them and I offered to ask here for her. A quick google search brought up Ace Hardware, but does anybody know where some are for sure?
I've got a Kenda 26 x 1 3/8 x 1 1/4 and a Cheng Shin 26 x 1 1/4. I don't think they're very common. Both are also brand new and have never been used. If you, or someone you know, is in need of odd-sized bike tires, I'm sure we can negotiate a happy price!

There's a guy down at the Eugene Saturday Market that makes gorgeous music stands from wood (Ravenstar Woodworking, I believe). (Exhibit A: this is one I own. It's purty.)

I want to buy something very similar as a gift for my music instructor. I would happily buy from the bloke in Eugene, but I don't get down there very often anymore, and almost never on the weekend when he's at Saturday Market. I don't want to drive down just for this. So I'm looking for the equivalent here in Portland. Does anyone know of an individual or store that carves wooden music stands? The one I own was in the range of $250, and I'd expect something comparable in quality to be comparable in price, and I'm OK with that. I just don't know where to look.

You are all a bunch of damned know-it-alls, so tell me what you all know! Please and thank you.

Anyone else just hear loud low flying planes? We live in SE just off of Holgate and it sounded like we were about to be bombed.
So out of curiosity, how are the Damnportlander's feeling about the mayoral race?

I'm torn. I can't stand Sam Adams, but wasn't too impressed with Sho during the last mayoral debate.

So I'm in the position again of casting a vote AGAINST someone, rather than FOR someone! I hate that!

Anyhoo. I've written a dozen letters about various things to Sam Adams over his term as commissioner, and I always get a lame response. Plus I just get a general power-trip feeling from him. And I don't like how he likes to make decisions on behalf of the voters, rather than letting things go to a vote... sometimes I'd like some say, ya know?

But seriously. Sho is his closest competitor. What's that about!? :)
So, I was hoping to be pursuing a career as a good old fashioned get under the hood and fix that shit with your hands mechanic, but my stepdad brought up the fact that nowadays cars are usually hooked up to a computer, have a diagnostics run on them, and then fix it. And I got really sad, because I've been trying to get under the hoods of cars for years, only to have people tell me that I'm a girl, therefor I must know nothing about cars.

So, that being said, is it still possible for me to achieve my dream of working on cars, or should I give up and just be tech support for the rest of my life? And if I am to be a mechanic, where would I go to learn such skills? I tried calling PSU and asking them if they offered any mechanics classes and the person kept asking me if I wanted to enroll, even after I told them that I would like to enroll, if they could tell me if they offered the classes pertaining to my interest. But no, just ten minutes of "Would you like to enroll in our programs?" after I had just explained that I wanted to know if they even HAD mechanics programs before I enrolled.

Bah. Sure is frustrating, but I wouldn't be dealing with this if I didn't love cars.
Collapse