my friend recently moved across town, and her pusseh cat escaped out the door of her new place
(in beaverton) a couple of days ago and hasn't been seen since. 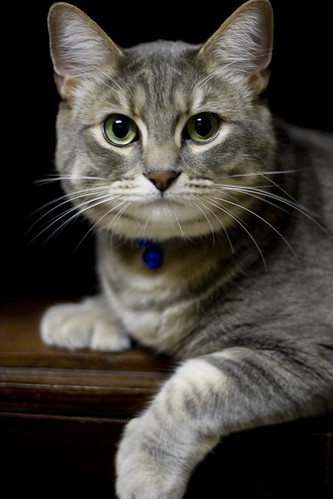 (clicky here for a few more pics of him)
he's kinda feisty, very handsome, and obviously well.loved.
he answers to the name of benito and may or may not have a collar and tag on him
(he tends to lose them -- it's a skill.)

if you have seen this cat, or know anyone who might have,
pretty please with cherries post here or shoot me an email
at blakthorne at the g.mails.
thankyoumuchly, pdx.
you rock my socks.

Me and my Boy's first anniversary is on Sunday (not because we started dating on 4/20, but because our first date was on a full moon, and this is the 12th one). Anyway, we had some out doorsy stuff sort of planned for Sunday, but it looks like it'll be all nasty outside. Money is not plentiful, but we have a little. I really want to do something special. I'm still new to this area (he's been up here almost his whole life)...any ideas?

Who: Singles in the 20s and 30s
What: Regualarly scheduled game night!
Where: Lucky Lab NW, 1945 NW Quimby P-Town
When: Starting at 700pm and going until around 1000 or so
Why: To hang out, drink beer, eat food, say happy birthday to some of our attendees. Oh yeah, and play some games too!

So bring a friend, a game or two, come say Happy Birthday to Jennea and Shelley, have a beer, and just hang out!

I have a shared family plan on TMo with my brother. His credit was too bad and he couldn't get a phone in his own name. Everything is in my name and we've had this plan for four years now.

A few months ago, he lost his job and couldn't pay the bill. I was fine with paying it as long as he paid me back. Well he's gotten a new job and hasn't given me any of the money, three months worth of bills and having TMo Sidekicks is not cheap.

I've talked to TMo and I have options of either finding someone to take over his line, or cancelling the contract which costs me $200, or suspending his account but I still have to pay $105 a month for him not to use his phone.

I really don't want to terminated the contract so I have the remaining options.

My question is two parts:

1. Does anyone need a phone? None of my friends need them and it would just be easier for me to get someone to take over his line. If someone wanted to do this I have a family plan with 1000 shared minutes, though I don't use any minutes at all. I'm a text-aholic. If you already had/have TMo and have a sim card and/or phone I can set it up for you to be added to my account. If you don't have a phone I'll give you my one month old Sidekick iD for $50. This is a brand new phone with the grey bumpers along with red ones that I bought. The plan with the Sidekicks comes up to be about $75 a month. I'd really need someone that has a job and money to do this. I can't keep paying everyones bills. I got my own stuff to worry about.

2. How do I go about taking my brother to small claims court for the money he owes me? I don't want to do this but he refuses to return my phone calls and texts about the money he owes me. I figured I should mail him a formal letter asking for the money. Then give him some time to respond. Maybe two weeks. If he doesn't I need to file something to take him to small claims court. I really don't know what to do and I'm so mad my own brother is doing this to me.

I know this was long but I need some help. Thanks.

Granted, these weather people never know what they're talking about but still.

Has anyone here ever worked for a company like Grande Luxe (http://www.americanorientexpress.com/)? I am wondering what it would be like to have to work on a train, and if they pay well. It's hard to find first-hand info online about life aboard a train. What are some sites where people can rate their employers? I'm drawing a blank.

Yesterday on my lunch break I left work in search of Taco Bell. Stopped at a stop sign my car died just across the street from my destination. A very friendly gentleman hopped out of his car and pushed me around the corner into a parking spot and disappeared into the sea of cars. Unfortunately I was stuck in a 15 minute spot. Luckily there was a Les Schwab right down the block, and they brought their battery charger and tried to jump start my car to no avail. Eventually one of the guys drove my car to their parking lot with the battery charger powering my car, and told me to come back in a couple of hours. I spent some time at the mall and came back to a car with enough juice to get me home. My alternator is dead and I'm not going to replace it, but at least my car is home where I can deal with it later. Everyone in that Les Schwab store was absolutely helpful, friendly, and understood why my waterworks were going full force.

It's nice to know that in this huge world there are still people and companies out there who care!

Tell me your favorite joke!

Does anyone remeber a horrible version of Richard The Third that was performed at what now is Outlaws (once was Bossanova) on NE 7th and Burnside?  In this version everyone was homeless.  Back then the building was a rundown Mason's Hall.  The play opened and closed the same night.

Just a random past monet that popped into my head.

My early '90s Toyota 4x4 would like its clutch and accompanying parts replaced. Where do my fellow Portlanders prefer to take their favorite Toy's for such a service?

Please offer bottom-of-the-barrel mechanics with matching prices as well as top-notch shops with free lunch while you wait, as I like to check out a range of options.

Thank you for your time.

Hmm.... it does seem a little bland. Time to start planning my next trip. Possibly a move...?

I took the Max to the airport yesterday. I left from Pioneer Square around 2:30..... after one last trip to the mall, where I bought a mouse.

The Max stop is right downstairs from the Alaska terminal, which is nice. My flight was at 3:59, and I got there just after 3, but getting my shoes off, and everything takes awhile.

My mom was waiting for me at the gate when I got to LAX. We sat in Jody Maroni's for awhile, because a horrible accident on the 405 had it at a dead stop for miles. Oh boy, how I missed LA traffic! *eyeroll*

It was strange waking up here again...... but I love being able to stumble to the coffee maker and make my own coffee. It's also much warmer here.

Hello. I have some silver pendants that I'm thinking about melting down and making into a ring for someone.

I've never done anything like that before and I was just wondering if any of you had experience with melting down jewelry and making more out of it. Is it expensive? Know of any good places? I'd really like to be able to talk to the person actually doing all the work to give my input rather than having it shipped somewhere else or something. So a smallish local place would be nice.


Oh yeah, and downtown area would be really nice, but I'd be able to swing any place that seems good enough.

Yes, it's another frequently asked question. I am looking for a new place for June 1st and have seen a couple of places I liked that were managed by Capital property management. Has anyone had an experience with this company? Good? Bad? Thank you! Merci!

after that joke post i must ask...does anyone know the whole joke from the breakfast club? he falls through the ceiling and doesnt finish it...

Someone here must be a sprouter! I'm interested in getting into sprouting, and I was wondering: where should I go around town for seeds/supplies?

Also, where's a great place to buy seeds for the garden? I'm looking for Territorial Seed Co. in particular, but I'd love to know any great seed places.

1. Today ws pleasant weather as I got out of work at 6pm
2. Money in the bank is a plus
3. My car won't start and I don't care...the joy of having working public transit
4. Burgers n Baked Beans prepared by my lovely wife...thumbs up
5. Detroit Tigers won 13-2
6. Interesting author readings at Powells the next 2 weeks I hope to attend

I used to do some volunteering in other countries and states, but I have not done much since moving here a few years back. I was watching the last  Bill Moyers journal and saw the people who were working in New York in food-banks. Anyway, this brought me to the thought that even though I struggled sometimes to eat and have gone hungry many times in the last year, I have made it to a place where doing alright now and would like to volunteer to help others. I am not saying that I only want to work in this style of volunteerism (I'm not sure if that is a word, but I mean open to all/non-foodbank related), but just would like some suggestions. I have done some googling, but would like to hear your opinions on places. I work full-time on the weekdays, but weeknights and weekends I can volunteer. I mention this, because I looked into the SMART program before and that seemed to only happen in the weekday work hours.

PS. Downtown or inner-city is most likely needed as I don't drive.

Actually, this sort of discourse might bear fruit into a nice wine-tasting for DP! Now, since we've covered the gamut for the inexpensive-but-never-cheap-wines, let's foray into the $20+ bottles for those interested! I believe we've a headstart with those wanton temptresses known as Ridge wines. What are your other indulgent favorites?

I'll start with Justin Isosceles. Not only is it a Euclidean geometrical favorite, it's tasty on the palate. At $62 a bottle it's more of a truffle than a cremini, though.

I don't travel much, and last I heard, just about most personal items were banned from carry-ons(nail clippers, nail files, lighters, etc). BUT apparently, since 2007, lighters are allowed on carry-ons. http://www.tsa.gov/travelers/sop/index.shtm

Although you can only take up to 3oz of liquid and they must be in a 1-quart zip lock bag.

Still, I'm shocked they have lightened up security on carry-ons. And I LOVE that they call lifting the lighter ban a "common-sense approach." So anyway, those of you who plan on traveling by plane soon, here is the most recent TSA list of what you can and can't bring on the plane: http://www.tsa.gov/assets/pdf/prohibited_and_permitted_items_10-24-07.pdf
Collapse