Snowing in the heart of Multnomah Village, elevation 514 feet. 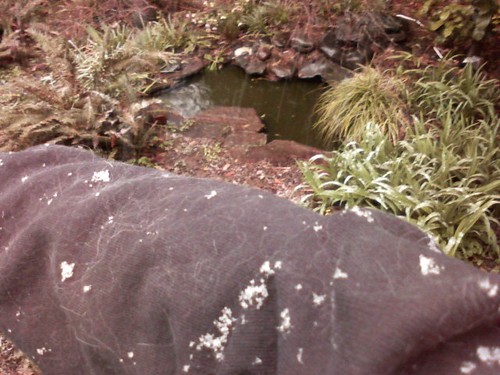 snow in the powell butte neighborhood!

ALSO, come in to my work!
i make excellent coffees at this hole in the wall, cafe bean, conveniently located where it is currently snowing in my location chartz.
screw your work schedule, you know you wanna come in and tell me you're in DP and gets yourself a cup of coffee.

or like a bagel OR a homemade rocky road brownie.
right...

SNOW downtown at the square.
Hiya,

Anyway, where on earth might I find some "hip" early maternity clothing? I'm only 5 weeks in and already I can't button my freaking pants. The racks of khaki pants at Mimi Maternity and Motherhood Maternity make me want to gag. Help? There must be another option in this town!

OMG! I just read in the Oregonian today that Polaroid has discontinued making the instant film they make for Polaroid cameras. Is there anywhere I can still buy some and stock up? Alot of polaroid artists are going to be very depressed.

Hey all! New to the community (both in real life and on this LJ community), first time poster...

...and I loves me some rugby. I'm still new at watching it, but I freaking love it (even if France DID win last year, meh)...

Anyway, I see that there are games on and I can watch them at Kell's, but I can't seem to find how I can get rugby in my home. It doesn't seem to be broadcasting on Comcast. Do I need to get satellite or something? Anyone know?

And is anyone here a Portland Pigs fan? I really want to go to a match, but the website doesn't say when the games start, how much they are, etc.

Are there any stores locally where I could by a silver-plated tray?

I'd rather not have to order online and pay shipping!
Anyone? I'm going to work at my friends booth, DungeonExpressions.com
Come say Hi maybe? And don't be scary. I'm so intimidated by the /stories/

On another note, I need to get a tiara. Just so I can look like my userpic.

I have incriminating video of none other than DP's favorite meet-up photographer,

bellybalt. I have been *expressly* prohibited from posting it here on DP or on YouTube for fear of dispersal.

Does anyone care to wager a guess what's on this damning video??? ;-)

On May 10th, we're hosting a Carnival-themed party - so Save the Date! and start getting your Pudding Wrestling Outfit together!

Proceeds benefit Tool Shed and a host of Burning Man Camps - yours too? Contact us now relating to donating art, become a beneficiary, volunteering or performing.


may10@toolshedpdx.org
How and where can I get a 'certification of absence of police records' from the city? I need one for a visa application I'm working on. It also has to be 'legalized' (notarized?), and this web site is supposed to help with that, but reading it is only giving me a headache.. hell, I don't even know what notarizing actually is. Help!!

Like many workplaces in Portland, my place of employment is very casual and has no stated dress code. Today, like almost every other day, I am wearing a t-shirt layered over a tank top, jeans, sweater, and casual shoes. I took off my sweater to walk down the hall to the restroom. In the mirror, I noticed that my nipples are visible through two layers of shirt (I am not wearing a bra).

So... my gratuitous personal details aside, what are your thoughts on nipplage in the workplace? Is it OK? If it makes someone uncomfortable to see the outline of a nipple (oh gasp) should they say anything, or would that be venturing into potential harassment territory? Is the standard different for women and men?

Anyone have any helpful suggestions for filing unemployment in OR?

So far: I was dismissed from a temp assignment a month early with no warning, and after a full week of emails and phone calls, still no explanation. I filed an unemployment claim on Tuesday, and found that there was a hold on my claim, which meant I'd have to fill out a questionnaire explaining that no, my company had given me no indication I was a crappy employee, I hadn't gotten any warnings written or otherwise, I wasn't fired for selling company secrets or showing up drunk or anything.

So the person on the phone was kind of incompetent seeming, with lots of dead silences where I had to be like "hello?" and restart the conversation, and she also at one point, after I'd said literally 2 words, "uhh, slow down, I can't type that fast". I didn't think much of it until here it is, the end of the week, and I still haven't gotten a form in the mail that was supposed to be mailed to me from Salem. And that the OR unemployment website has no record of my claim. AND now I can't get through to them on the phone to save my life. I call and call and call, and just get put on hold for approximately 6 minutes, and then disconnected.

I'm starting to think that the agent didn't even enter me into the system. I can't find out for sure though, because I basically cannot get in touch with these people in any manner at this point.

I feel like I have a pretty legitimate claim, and they pretty much seem to be telling me to just go die. anyone else had this experience?

Any idea where I could procure an epilator in the Portland metro area?

Or if not, any ideas where I could procure cheap waxing materials for waxing large body areas without having any expertise in waxing? (because professional waxing is intolerably expensive)

whoever pissed off storm from the x-men, could you please writer her an apology email? thanks!

At 11th and SW Taylor. And a screaming crazy guy in the vicinity as well.

Got your letter, thanks! It's always nice to hear from you.

http://green.yahoo.com/news/afp/20080328/wl_asia_afp/climatewarmingaustraliaearthhour.html
Here is a party for you all to crash tonight:

Bring a meat product for Mikey.  Also, he converted and isn't Canadian anymore!

BYOB and BYOM (Bring Your Own Midget).

I want to venture out tonight and eat some Pho. I remember seeing a post in the distant past but only found one that listed a few places out in the burbs.

I live in N Portland and have been to Pho Jasmine, Pho Dalat, Got Pho, Pho Van and a couple others... I'd love to try a new place - preferably on this side of the river.

What is your favorite Pho place?

So today, I fulfilled one of my long-held ambitions.
To walk to Salem.
I didn't actually walk there from Portland. I walked there from Woodburn. In all, it was 16.5 miles.
And I had scheduled it for today, not knowing it was going to be the most bizarre weather day that I can remember. Throughout my trip, it would get sunny, start to warm up...and then chill suddenly, after which I was pelted with rain, snow, hail, sleet or a mixture of the four.
I took the #33 to Oregon City, then I took Canby Area Transit Busses to Woodburn. That is when I started walking, which took me from about noon to around 5 PM. Then I took the 1X express bus back to Wilsonville, and then the 96 back to downtown Portland.
Rural Oregon is interesting (and Marion County is of course not that rural). There is lots of ugly parts, especially along the highway, and also lots of nice old farm homes and the like. It is all fairly jumbled together, and perhaps should be viewed in some time different than walking down the highway during a freak snow storm.
And that is my story.
I'll be in Portland from the evening of April 6th until the evening of April 9th. Does anybody know if there are any events, shows, or anything special happening then? The 7th would be the best (it's my 19th birthday). I know that's a Monday, but maaaaaaybe....?

Edit: Also, where can I get a yummy slice of chocolate cake? (Bonus points if downtown)

Someone in another PDX community brought this up today: "although the website paperwork we printed out states that in Multnomah county notaries are available for no cost at the county clerk's office, this was actually only true for the first week that Domestic Partnerships were legal - we are now on our own for finding a notary."

I replied there but wanted to get it out here as well - I'll happily provide my spankin' new notary license for free - just drop me a line and we'll set something up!
Collapse