So while I was out with some friends tonight, my clutch totally died. It only went halfway down as I was trying to stop for a light, so I let off and tried again, and it still stuck, so I pushed harder... and something went "clunk" and then the pedal went all the way to the floor with absolutely no resistance. >:p And let me just tell you how much I DID NOT NEED THIS this week! Remember the whole EKG thing? Well, if anybody was worried, my heart is fine... but it's been the week from hell.
Anyway, anybody know roughly how much a new clutch might run me? That's assuming that it is just the clutch and there's nothing else major going on with the car. It's a '96 Geo Metro. Nothing exact, of course, but am I looking at a couple hundred or a couple of grand here? 'Cause at the moment, I have $24.15. And sure, I get paid tomorrow (assuming I can GET there to pick up my check!), but the first paycheck gets EATEN by the rent, insurance, and random other bills, of which about 95% are due in the first half of the month. Second paycheck is the one that actually goes to little things like groceries, cat litter, car repairs... I'm praying that the mechanic will let me do payments.
And sure, he'll give me an estimate once he looks at it... but that won't be until MONDAY, and well, the panic is here now.
Did I mention how much I DID NOT NEED THIS this week? Shit!

ETA: Thank you guys SO MUCH! This was EXACTLY what I needed to hear this morning. I seriously appreciate your input! :)
what can i do tonight (saturday) that doesn't cost any money and preferably involves leaving my house and dancing?

If someone invites you to a 90s party, seriously consider what you may be faced with. 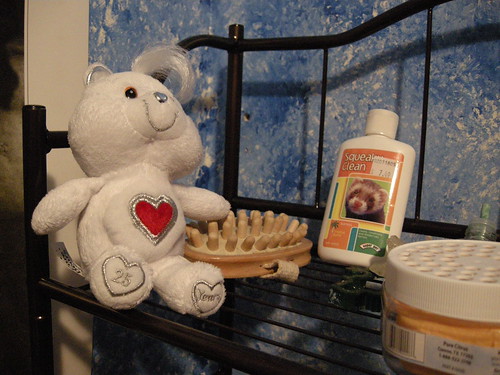 i know several of you were at the 90s party last night. it was nice meeting you. i had a great time. how many of you were there? i was the one with the pink and blonde pigtails and the short purple shirt running around with glitter on me. it was a lot like middle school only im allowed to dye my hair now. hope you all had fun. i have pictures in my lj scrapbook from the party.
Where heck can I get empty gelatin capsules, at size 4? For my cat.

I have tried two GNC, Trader Joe's, Wild Oats, Vitamin World, WalGreens --- all did not have it!

I just wanted to give a shout out to anyone doing the Portland Urban Iditarod today.

For the rest of you, watch out for 175+ teams of drunken, shopping cart pulling, Portlanders running around downtown Portland today from 11 AM to 4 PM.

I'm fairly positive I've not posted to this community yet (I've been a member and lurked for a while, though not been paying attention to it again till the last couple of days), so here it goes...

I moved down here from WA in September for school and I'd love to make some more friends off campus since a lot of you seem pretty cool from what I've seen of your posts. Anyway, I just wanted to make myself known and hopefully I'll be doing more actual commenting/posting/whatever in this community so watch out for me? :D

the bigger the hangover, the better the party must've been.

dear god. i wasn't lying when i said we throw a pretty kickass party. from what i can remember.

thanks for keeping the puke action outdoors.

-the girl with the golden pants.
My husband

angille and I are trying to find a gaming group here in the Portland area. We've been here almost two years and have yet to venture out much into meeting new people poopies for us. I think this is a win-win situation as we can hopefully meet some new interesting people, and we can get back into role-playing.

Where did you go,

rarebit? I miss your posts. They always made me laugh, except for when they didn't. Usually then though, they made me think.

I'm switching jobs and contemplating trying to do a bike+MAX commute from the West Side into downtown. Looks like I'd be on the Max just from the Sunset Transit Center to the Stadium stop downtown. I know the trains can get crowded though and it can be tough to find space to bring a bike on. Are any of y'all familiar with this commute during normal weekday rush hours? How hard would it be to get a bike on each day?

anyone out there have an old lightstand that's going unused and taking up space?

can't afford to buy one new, and prophoto and citizens doesn't have anything...

would like to get into the next step with some photography and all that i'm lacking is a light stand!

I recently discovered Corbett Fish House. It's a fantastic restaurant for those of you who cannot/do not want to eat gluten. Nearly everything on their menu is gluten-free, their seafood comes from sustainable sources, and cook their food in high quality rice brain oil that they filter twice a day. The waitstaff was also incredibly nice!

They're located in John's Landing but they also have a sister restaurant on Hawthorne aptly named Hawthorne Fish House.

I recommend their deep fried cheese curds (seriously the best I've had since going to college in Wisconsin) and the boatload combo could feed two pretty easily.

My womanfriend and I are totally broke at the moment,and want to go on a date.
In order to fund this date,we have decided to try and sell some of the stuff that is just takin' up space in our tiny little northeast studio.
PLEASE BUY OUR STUFF,we want to go out.

So I walk outside to go to work this morning, and at my door is a little tupperware container full of chocolate chip cookies. No note. No card. Just cookies. I texted my downstairs neighbor and asked if she did it, and she said no.
The only other person I can think of is my upstairs neighbor, but she is not home atm so I can't ask her. But then, why wouldn't she just wait till she saw me and hand me the cookies?
My first thought was "I been ninja cookied!" But my second thought was "how creepy." Seriously, who just leaves baked goods at someones door without even a note or card. Maybe someone is trying to kill me. It is a mystery...
Those 5 little pregnancy test sticks on my counter all say positive. I am uninsured. According to Oregon DHS, I need proof of prgnancy before i apply for OHP. I might not even need it, for I will prolly get marrried ot my fiance in a few weeks (was planning for fall anyways) and get on his insurance.

BUT!
I need to find a clinic/doctor who can see me and make sure i am pregnant and give me the proof I need. I want to make sure I am healthy and stuff before I run to Las Vegas to get married.

any rec's for someone or somewhere who wont break the bank for not having insurance? and planned parenthood is not really an option. i want to be fully seen by a doctor, not a number in line.

EDIT: So basically, ignore the OHP. What I want is a doctor that isnt expensive to do my first exam this up comming week. I should be married my the 17th and be on my husbands insurance and wont have a problem. I just prefer not to wait abother 3 weeks seeing how im ust be at least 15-18 weeks along.
Just hang out at Saint Cupcake. That place is like one of those bug zapper things for women.

How far can you take this joke, srsly? I love it.

Several months from now I'll be looking to convert a mid sixties VW Bus to run on vegetable oil... this is going to be a business expense for a business I am starting up, and I'm currently writing up my business plan... so, I just need to know an approximate cost for the conversion. I'm not sure what all is involved... but I'll be starting with the bus and either a standard engine or no engine at all... It would also be helpful to know where in town is an excellent place to get it done :) Thanks a ton!

All this posting about cupcakes reminded me of the NPR story not too long ago wherein the dietitian/detective dude had cupcakes analyzed from gourmet cupcake places in NYC. Now, I'm certainly not a calorie counter, but the thought of eating a snack that's nearly half the recommended daily caloric intake makes me sort of crazy.

It could be that the St. Cupcake cupcakes aren't 800 calories. I certainly don't partake in cupcakes enough to care (or to ask after the St. Cupcake nutritional info), but the question of how much people pay attention to that sort of thing is kind of interesting.

So, uh, if the cupcakes are nearly 1,000 calories, does that matter to you?
Collapse