Does anyone know since when Past & Presents disappeared out of Lloyd Center and if the store still exists in Portland? If they are gone, then do you know any place where I can find whatever of Elvis Presley? My mom's visiting from Japan, and I really don't wanna tell her Elvis is gone out of this town. I mean this is America, for god's sake..

Where could I find sparklers at this time of year? Preferably without driving to Washington, obviously.

anyone know the story behind this gem [on 44th and lincoln in SE]. I always pass by it but have never seen anyone actually put these trinkets on there. Are there some sort of elves that appear in the middle of the night and decorate when nobody is watching ? 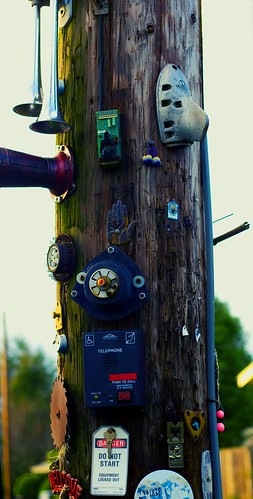 also, anybody else up and at 'em at this hour?

My brother needs new shoes. Unfortunately, he wears a size 14 and they are nearly impossible to find and there's little selection. We've gone a few places recently with little luck and there just has to be a solution.

Where do the larger-footed gentlemen of this community get their shoes? Is there any place in the Portland Metro Area that carries a large selection of larger shoes? Or even as far south as Eugene? (Or up the I-5 corridor to Seattle? We're pretty desperate here!)

Beyond the Google factor, can anyone personally recommend a refrigeration repair service in Portland or, more preferably, close to St. Johns?

x-posted to my journal

My mom read something in her Korean newspaper about a new Korean grocery opening in the Portland area. I guess it's taking the place of an old Haggen grocery. Any one know anything about this or have an idea of where it might be?

Monday, January 21, 2008, Monday Movies presents Life in the Ghetto Night at Mississippi Pizza Pub in North Portland. Come out and join us for a hearty helping of freshly baked pizza and Integration.
In honor of Martin Luther King Jr. Day, Monday Movies will be screening Martin Luther King, Jr.: An Amazing Grace (1991, 60 minutes). This film chronicles the life of the civil rights fighter through newsreel footage and film from his speeches. This film will be followed by our previously announced film The Poor Pay More (NET 1965 b&w 60 minutes), an expose on the exploitation of inner-city residents by retail credit "buy now, pay later" scams.

All movies are actual vintage projected 16mm films. Show starts at 9PM. Admission is free. This show is all ages and kids are welcome. For a complete schedule, go to http://www.myspace.com/mondaymovie or send email to mondaymovies@aol.com.

There is a really insightful article on ESPN.com about members of the Portland Trail Blazers visiting Martin Luther King Jr.-related historical sites in Atlanta, and being appreciative of history and cultural significance. It's interesting to note that the Blazers employ a director of player programs who oversees scheduling educational field trips for the athletes. An article like this provides a good insight into the lives of pro athletes--it is a nice change to read about Blazers in this context, rather than on police blotters.

When our high temperature for the day is in single digits or negatives, as it is in many parts of the country, you can go apeshit. Until then, 35 for a high is NOT the end of the world as we know it. Nor is 22 for a low, honestly.

I hate taking the bus some days.

I got off work at 4:15-ish and walked to Morrison @ 2nd to catch the 14. The bus came, and a woman in a wheelchair got in line. I let her go in front of me but then some pushy chick shoved her way to the front of the line rather rudely and got on first. Another woman muttered "bitch" a couple of times under her breath. (Yeah, just what I was thinking but I tend to keep my hateful thoughts to myself.) The two women started sniping at each other - apparently the first one has a "high risk pregnancy" and had to sit down. The driver asked the two to pipe down, which they did (sort of) till the second woman got up to get off. The pregnant woman went off on what a "snotty bitch" the other was, and how she should mind her own damn business, and how, if there were no Measure 11, she'd kick her ass. Nice.

What ever happened to the concept of holding your tongue?

So saturday the boy and I were driving home after breakfast at the Night Hawk in North Portland. We got behind a little white Kia, and the driver of that car threw half a hamburger and wrapper out the window. UGH! That pisses me off! Really?! Who does that anymore? My boyfriend pulled up next to her and she rolled down her window and he said "Are you aware you just tossed burger and wrapper out the window?" She replied with a "yeah, so?" and drove off. We were both just apalled at such behavior. It's 2008!

*this isn't mine and it doesn't represent my views in particular.

The Coachella line-up has been released and (yayayayayay) M.I.A. is scheduled to play. However, I'm not keen on the desert and I've all ready vowed four times never to go back to Coachella. That said, I can't seem to find any listed dates on http://www.miauk.com/info/ or her myspace page, which nearly sent me into an epileptic fit. I also checked Ticketmaster and Goldenvoice's website. Is there some ticket site that I'm oblivious to that I should be checking?

But some of you are really a bunch of tight-assed, hyper-sensitive, self-righteous, PC-obsessed whiners. To these people, I'm kindly and formally requesting that you consider growing some thicker skin, getting a more realistic look at the relevance of your hysteria over truly petty issues, and trying to have some fun instead of making yourself a martyr, a protester, or a general good-time-ruiner as a full-time commitment.

It's alright to have a cause. But that doesn't mean you need to take issue with everything.

Nobody should feel as though they owe a complete stranger an explanation for why they live the way they do. If they drive a car, smoke cigarettes, toss their empty water bottle in the trash instead of walking six blocks to the nearest recycling bin, don't buy organic, eat meat, or don't share your PC sense of humor- who cares? Really, is it worth picking a fight with a random person on the street or the internet every day?

Everything does not have to be such a big deal, guys. Life can be fun.

Sincerely,
A Portlander who drives, eats meat, smokes, doesn't always recycle, hates organic produce, has a fucked up sense of humor- but is nonetheless a responsible, respectful, reliable person who doesn't deserve snotty judgment calls hurled at her from self-righteous jackasses on the street.

Can't believe it's me posting this but...

I was thinking today about the division between drivers and cyclists. I've seen frequent comments that cyclists should have to follow the exact same road rules as drivers, and that they should have to take classes, get licenses, help pay for road maintenance through registration and licensing fees, etc. That's certainly one approach we could take, but why stop there? Why don't we make people get walking licenses, too? We could require them to signal stops and turns and wear appropriate lighting from dusk until dawn. Jaywalking enforcement would be increased. Licensing fees would help pay for sidewalk maintenence and DMV expansion to handle the additional staffing and facilities requirements. Children under 16 would have to be ferried from place to place on stretchers or in wheelchairs, of course, since they're too young to walk, but I'm sure we could make it work; plus, this would cut way down on juvenile crime, loitering, etc. Similar requirements could be imposed on skateboarders, rollerbladers, pogo stickers, and so on.

So, shall we make it illegal to go anywhere, using any means of conveyance, without government permission? What say you?

This is your day-before reminder: meetup is tomorrow, Tuesday January 22nd, at the East Bank Saloon, and the meetup faq is here.

This is an amazing event put on by an amazing woman and I hope you'll tell all your friends about it...

The second ever Fat Fancy Sale is this Saturday, January 26th.
From 12-5pm.


We have lots of beautiful clothes in an awesome array of sizes for you and yours!

Come out, support Fat Fashion, and Check out this Fabulous, Exciting Event!


portland related because, well, this is probably the most accepting, kind and helpful community i've seen that's for a city. happy MLK day!
Collapse