Every year, I try to organize my filing cabinet and always have the same question: what papers should I keep around and for how long? Why do I even bother holding onto bank statements and bill stubs? I only do it because my parents used to do it, but is it really necessary? What do you folks keep around?

so, anyone know what's up with these flares?
Hey so im going to be moving in with my cousin this sunday,  which as u probably guessed would make me new to portland and was wondering what would be fun places to hang out around? I'm  going to be by myself looking to make new friends, So i guess were is there a great single friendless person suppose to hang out  in portland?

I just posted my first ever "Daily Music Fix Challenge" on my journal.
I've got a song that I can not identify, and I'd love to get as many sets of ears on it as possible to see if I can determine it's origin.
http://lemurmaster.livejournal.com/42007.html#cutid1
Any help is appreciated.

There's a slam poem by Taylor Mali there too, should you want to check it out.

The Subversive Zone is a night of experimental/electronic/noise that happens on every 2nd and 4th Thursday night of the month at Mt. Tabor Legacy Lounge. Featuring local PDX musicians in an intimate setting with live visuals on the movie screen behind them to create a visual and aural experience. Just wanted to give quick shout out out to all of the Timber Army that showed up to First Thursday at the Bull Pen!! Great to see everyone and was
glad we were able to take a group photo!! Hope the Timber season does start sometime in March!! Mr. Bramlett and I are going to be making new scarves and hopefully be able to get together with Pong to create an amazing banner!!

For those of you who have never gone to the Bull Pen on the First Thursday of the Month to hang out with the Timbers Army, then go!!! When Timber Soccer season starts, you will be pumped up to attend!!!! Bull Pen Tavern is located right across from PGE Park...

I just wanted too say to everyone, that I know I suck at grammar. I always have I don’t know why it’s just my weak point. I mean really weak point. But I went back and fixed everything hopefully I got it right!!! Thanks for all your opinions and help. Really thanks!!!!

Thanks for breaking into my car and steal only the things related to my work. I mean really, with the exception of the stereo the rest was all either from my work or something I only used at work. Really I appriciate it, Thanks for making my saturday just that much better. And here I thought the woodstock neighborhood was a generally safe area.

btw, If anyone see's someone selling a Panasonic Car CD deck and a Tom Tom One XL GPS, Give them a solid kick in the nuts please.

if anyone knows anyone looking for a roommate, check out this link. k, i love you, buhbye!

So we just got a parking ticket outside our building for having an expired registration, literally an hour before we went down and put our new plates on.

Now, I wasn't even aware that you COULD get a parking ticket for having an expired reg, but I guess you learn something new everyday. How would we go about fighting this, since our registration was technically valid at the time the ticket was issued? Is there some way to go downtown and show proof that we were up to date? What would our chances be of getting the ticket thrown out? I mean, I know it's only $40, but it's $40 we really don't have right now. Anyone have any advice?

Hey all, I'm a student at OCAC working on a series of pieces incorporating Portland "landmarks". I'll be using exteriors as backdrops and adding in my own elements. I've got about half of the project figured out but I'm stumped on a few. I'm still looking for places in Portland that are connected with these movements and communities (Please note I'm not looking to mock or disparage any of these groups.):

I have a few ideas on all of these but nothing I consider really strong, I'm just not social enough to really know where the hotspots are. Got any suggestions for me?

So the stepfather and his kids are swinging through town today and want to go out to dinner, and they all are celiacs, meaning they have to eat completely gluten-free.

So any quick reqs for restaurants with decent GF options? They can usually always find something, but it'd be nice to go some place where they actually have some decent choices, as opposed to like, corn chips and burgers wrapped in lettuce.

Where do you go in the greater DamnPortland area to buy cool baking stuff? For example, we wanted some interesting extracts today, and couldn't really find much. The Frederick Meyer was devoid of interestingness. Wild Oats, same sad story. New Seasons had a couple (lime, chocolate) but that was about it.

Kind of a strange request here, but I am wondering if anyone (preferably in inner SE PDX) has a striped shirt (like a mime would wear) and/or a beret. I'm doing a film project (the next in a garbage day parody series) and our authentic Frenchman forgot his native clothing.

update: got it all!

Don't go out and get drunk tonight. Instead, watch the double-header debates. It's on ABC (channel 2 on most local sets), starting at 7pm PST.

It ends at 11p, so if you really need to get drunk you can go out and do so afterwards.

draws comics, some of which (pigs and pork and combinations thereof) ended up in the willamette week. they were super cute!

who is it again?

i tried ljseek and google and willamette week itself and i can't find him. thanks.

eta: i couldn't find it because i was looking in the wrong paper! my apologies. Another delicious Saturday Night at Apizza Scholls!!! The best pizza joint in Portland,  in my opinion!!! Located on about 40th and Hawthorne next door to JaCiva Bakery.  Get there early, because a line does form before 5pm.  Trust me it is well worth the wait.  Tonight, Mr. Bramlett and I had a Margarita pizza,amazing!!!!  All of there pizzas are extrodinare! They use fresh ingredients, and they only make 80 pizzas a night!

The people you will meet while waiting makes the adventure worthwhile.  If you like to snap the camera, like Mr. Bramlett and I do, you will have some well worth shots to add to your portfolio.  The employees that work there are incredible.

So if you are looking for a place with great food, wonderful conversations, go to Apizza Scholls sometime.
I will probably never go back to delivery only pizza!! 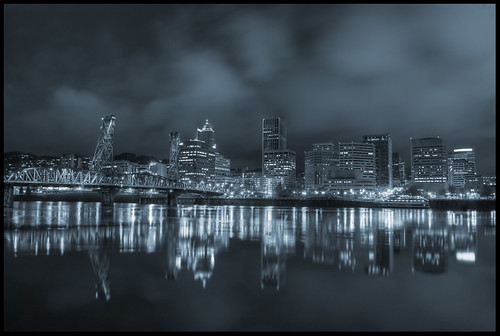 Seriously, I could look at that forever. Big enough city but small enough too. Bigger version here:

Who else is obsessed with Best Baguette? I ate there three times this week :) I love the Asian Veggie baguette.
Collapse