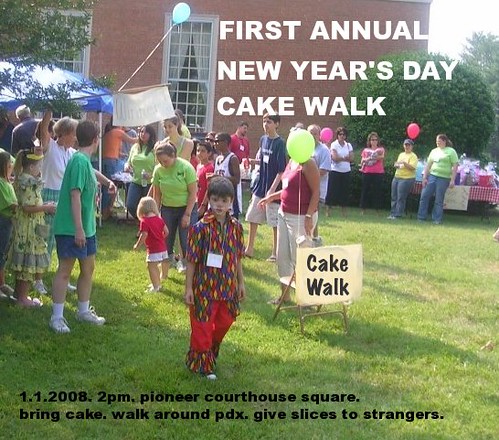 Like the cakewalk at the neighborhood carnival (except the circle is Portland-wide. and everyone wins). Tell your friends, spam your Internet friends, get your bake(or bakery purchasing) on.

Hey guys. I want to make a photo calendar for a gift. And I want it to me good quality pics. Does any one have a suggestions on where to go? Thanks!

Does anyone know if there's a place in Portland where you can go and use wood working power equipment like a table saw, miter saw, jointer, that kind of stuff?  Kind of like a walk-in, DIY carpentry center?

I know I can check these out from the NOPO Tool Library, but they're closed today.

HELP!
I need to get the USPS at 7640 NE Airport Way in order to get a package post-marked today. I don't have a car. Tri-met's site is down, and customer service is unavailable. USPS customer service is also unavailable, and the number they list on the website is a voice answering service. I'm ready to scream.

Question: Does anyone know what max stop I need to get off at? Is it 82nd, or 99, or the Airport itself? Where do I go after I get off the max?

Funny how yesterday I thought this would be easy...

Not the conflagration, not the popo, but the boss.  I'm going into business for myself providing technical services to engineers from my home.  Currently, I have only one client, but there are two more waiting in the wings so it seems like I should get serious.   All of the "doing business in oregon" type websites are honestly over my head, yet, so I'm meeting with a stinky hippie accountant.  He'll be able to point me in the right general direction, so I'm not really searching for basic instructions.  I want to learn from your mistakes.

Please, damnedest Portlanders, share with me the lessons you learned becoming self-employed or starting a small business.  Why is the city of Portland so hard on businesses?  Is there a better way to deal with them?  Is there anything you wish you'd done differently?  Is there someone or some place that helped you immensely that you recommend?  Any little bits of wisdom are greatly appreciated.

Snarking also welcome, though it may result in me selling your sister to gwar.

Are there any good local resources for raising chickens? Someone at work had mentioned a PDX Chickens site but I can't find it.

Also.. THUNDER SNOW! At least way out here in Camas!

SNOW ON BELMONT AND 37th FOR THE WIN!
OMG! Its the snow!

Edit: Seereusly WTF! Now it's sunny with an actual Rainbow out there. How did it get to this?
What were some of you guys favorite releases of 2007?

A friend of mine is selling a rather lovely fish tank and it includes all accessories AND fishies!!

It's an attractive tank, about 4 years old, in excellent condition.
Here's the link to the Craig's List posting.

Preferably with charger, but flexible on that. Excellent to good condition. Portland tri-county area and Vancouver. If you have one for sale, I'd love to hear from you. I intend to use it on Cricket. Thanks. Comment here or email jenniferjamesn@pookmail.com

as you were, darlings. thanks, just the same.

My boyfriend is trying to sell his Civic and Integra. They both need a little bit of help but the price is cheap so that makes up for it.

If you are seriosly interested the pictures are on his myspace at myspace.com/rhymevigilante under cars for sale.

Typewriters? Do people even like those things anymore? I know I sure do, and I want to get my hands on one. Manual, because I'm nostolgic like that. Where in this great city can I buy a typer without feeling ripped off?

So I was watching KPTV 12 and how there are new traffic laws going into effect in '08 like no limit on those photo radars at intersections to catch  red-light bypassers and what not.  On the subject of intersections, I noticed that on 20th and Sandy there is now a turn signal for those wanting to go east or west which wasn't there before this year.  What I want to know is why the city didn't go a few blocks south to fix the problem at 20th and Burnside.  As of now, if you want to go east or west you have to wait until cross traffic clears up enough to turn.  At off-peak hours you get  maybe 4-5 at the most before the light turns.  During "Rush Hour" you're lucky if 1-2 get to turn despite the backup that often occurs.  Anyway, why didn't the Portland Developers change this traffic signal so that there's a green turn signal at the same time they were changing the Sandy one?  It can't cost that much to change the lights, can it?  Who can we talk to to better this situation?  While you're at it, change the one at 28th and Burnside as well.  Ease the flow of traffic instead of congesting it.  *Sigh*  ;(
Here's another thing I'm curious about.  I'm currently watching a string of movies from '82 to end the year.  Ones like "Fast Times at Ridgemont High" and "The Last American Virgin" amaze me as to how dated they are look wise.  Granted, 25 years have passed and while the fashions have changed, the ideas and problems these teens faced still seem relevant to this day.  There are movies though that at one point seemed really great as if they were speaking right to you but when you watch them later on, seem really dated and makes one wonder what you really saw in them in the first place.  For me, it's movies like "Pump Up the Volume" and "Reality Bites".  Back when I was still in school, these movies seemed to be the external voice to my internal feelings.  Now they just suck.  The only good things from either film is Samantha Mathis being topless and Janeane Garofalo looking the best she'll ever look. Even more recent examples like  "Empire Records" and "High Fidelity" seem dated despite my loving them initially.  I think for those, it's more a matter of  how quaint they are and how in the last 10+ years, the business portrayed in the film is  painfully outdated.  I think the last movie I saw that I still relate to is "About A Boy" and even that one is slowly becoming obsolete.  Is it just a given that we'll outgrow the films we loved and related to or are there movies out there that you've seen that have become synonymous with your persona throughout the years and can watch over and over again without growing stale?

PS- Portland rules!  I add that just so this will be relevant to the community.  ;)
Did anyone go to that Cure tribute/charity show?

I"m excited beyond words and if you like his music than you should go.

My tickets are already bought.
Collapse