Did anyone happen to catch him at Berbati's last night? I wanted to go but couldn't stay up that late on a school night.

Man, I am sad to see the clown house go

We don't get cable where I live, and I'd like to watch this Sunday's Seahawks game (and future games) on a large TV with a clear picture. I live in NoPo, and the only bars I've seen nearby don't look like they'd be too fun to watch a game (or drink, or sniff the air) in. So I'm asking you, the reader, if there are any cool sports bar type places you'd suggest. N or NE preffered but not required, and I don't care how trendy or fratty they are.

there will be a nationwide nurse-in taking place tomorrow at noon at applebees across the country. if you want to support this cause, nursing mother or not, please join us at the applebees.


Edit:
It seems people are focusing more on this incident and it happening in Kentucky.

I had a similar problem when I would feed my son and daughter here in the Northwest.  I was at Lloyd Center one day and my son was hungry.  I used my breast as they were intended to be used and was covered, but because those that walked by saw his feet and knew I was breast feeding I got remarks and looks that were disdainful.  If you read the article it also says this happened to a woman on a Delta flight in another state and she was asked to leave the plane.

This happens everywhere and I personally think it is horrible.

I still have my DHS card that says the ORS on it all about my right to feed my child.  I have extras I hand out to moms that breastfeed thier babies. What is one supposed to do with "expired" car seats? It hasn't been in any car accidents, it's just old.
Have the trash guy haul it off?

I've noticed a few brick buildings in NW and NE that have Egyptian decor around the entranceways and whatnot. Anyone know of why this is?

Is there a Greek restaurant out in Beaverton that has belly dancing? I thought someone had mentioned one back in June when I asked about Greek + belly dancing in PDX, but I guess not. And Google seems to be failing me. We were thinking of going tomorrow...

My good friend Russ is showing his Bonsai trees at Bombshell Vintage tonight for First Friday! You should come and check them out! 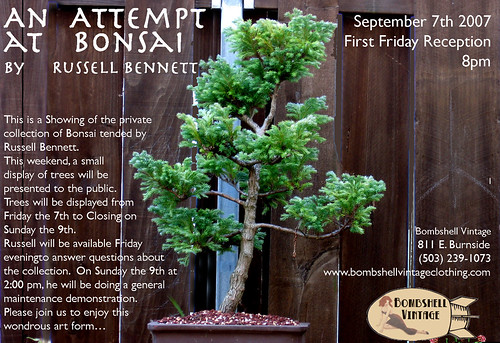 This was one of my favorite books growing up.

HARTFORD, Conn. – Author Madeleine L'Engle, whose novel A Wrinkle in Time has been enjoyed by generations of schoolchildren and adults since the 1960s, has died, her publicist said Friday. She was 88.

Madeleine L'Engle L'Engle died Thursday at a nursing home in Litchfield of natural causes, according to Jennifer Doerr, publicity manager for publisher Farrar, Straus and Giroux.

Although L'Engle was often labeled a children's author, she disliked that classification. In a 1993 Associated Press interview, she said she did not write down to children.

"In my dreams, I never have an age," she said. "I never write for any age group in mind. When people do, they tend to be tolerant and condescending and they don't write as well as they can write.

"When you underestimate your audience, you're cutting yourself off from your best work."

A Wrinkle in Time – which L'Engle said was rejected repeatedly before it found a publisher in 1962 – won the American Library Association's 1963 Newbery Medal for best American children's book. Her A Ring of Endless Light was a Newbery Honor Book, or medal runner-up, in 1981.

In 2004, President Bush awarded her a National Humanities Medal.

Wrinkle tells the story of adolescent Meg Murry, her genius little brother Charles Wallace, and their battle against evil as they search across the universe for their missing father, a scientist.

L'Engle followed it up with further adventures of the Murry children, including A Wind in the Door, 1973; A Swiftly Tilting Planet , 1978, which won an American Book Award; and Many Waters, 1986.

Is there a Laundry Mat located near Sellwood (or preferrably IN Sellwood or Westmoreland possibly eastmoreland?)

As evidenced by the occasional "I'm bored" or "what are you guys up to this weekend night?" post, it seems that some of you may be in need of entertainment on a Friday evening such as this (and what a beautiful one it is). I come equipped with a fine solution! First Friday is taking place tonight in the Central Eastside, a refreshing compliment to First Thursday except not on a work night (so feel free to have that second glass of wine) and without the huge throngs of crowds. A good excuse to get out in the nice weather before it departs for the next seven months, and to see some cool art and score some free refreshments.

I myself will be showing at Bamboo Grove on the corner of SE Taylor Street & 2nd Avenue, conveniently located near Clarklewis, the Bakery Bar, and down the street from Produce Row Cafe, and Launch Pad gallery (at which another damnportlander, thiebes, will be showing at) plus a bunch of other cool places to eat and see art.

So come on down, have a drink, look at some art, so you have something to report to your friends on Monday morning at work.

I am desperately looking for a dietician but my Google and Citysearch skills are failing me. Most that I find seem to be requiring a membership to their gym. I posted in this community awhile back about it, however, I got few responses.

My question is - do any of you have a dietician you personally loved who was kind and not judgemental?

I am going to head down to Boston soon by car (I'm in NW Ontario at the moment), where I'm going to visit a friend at BU and then bus down to New York for a few days. Problem is, I got no place to park my car in Boston for those few days. Bigger problem, I will have loads of important semi-valuable shit in that car. Any ideas on where I can put it? Are there places that offer that kind of short term storage?

Right now my only idea is to park it in long term parking at the airport, but I know even that ain't quite secure...any ideas? Double plz?

P.S. A few months ago I posted a request for your favorite drink recipes. I'm happy to report that over the summer I got slushed on them all.

EDIT: Yeah, I know this isn't a Boston comm, but I'm more looking for outside-the-box ideas of where to store my car as opposed to where specifically in Boston I should lodge it.

So I'm venturing downtown to the Art Museum with my spawn tomorrow and would rather take the Max or the bus or something than try to park.

Any advice on screwed up routes? Best routes? Anything?

I dunno if this will work out in time, but here goes.

We're going to Canada tomorrow, I have a job interview on Monday in Vancouver, and we are extremely short on funds.

I have a $100 Macy's gift card that I have never used, and probably never will. I am willing to sacrifice it for $75, and to sweeten the deal, I will throw in two $10 gift cards to Storables.

Help! I have to quit smoking; I just gave away the last of my smokes today in fact, and I'm now sitting here stuffing my face with.... cantaloupe! But I don't expect this to last and I want to avoid the chocolate, you know? Plus I sort of needed help anyway, as I'm a kitchen moron and can make 3 dishes and my boyfriend's pretty sick of them, so if any of you have good recipes involving a lot of fruit and vegetables, low on the mammals (although I do eat meat), and easy enough even I can follow them, I'd really really appreciate it. I aim to be the first person I know to lose weight after smoking, and I think it'll help if I'm occupied in the kitchen with healthy recipes. I'm already figuring I can replace my morning smoke with a brisk walk (naive, but perhaps it could work), but this'll kill about 3 birds: learning to cook better, impressing the s.o., and distracting me.

EDIT: Holy crap! You guys are amazing! I was going to respond to just about each and every one of those posts, too, then my fingers got tired and I need to get to the store so I can buy things like "catfish". I also haven't had a smoke for 24 hours... I really appreciate all the help!!!

Check out what's living in my front doorway!!!  It's about the size of a small pea and I'm guessing it's building an egg sac. Obviously, I don't use my front door much or I would have noticed the huge web this thing was building much sooner.

Anyone know what kind this one is??