bellybalt, the unofficial "official" meetup-picture-taker was not present at this month's festivities, I decided that I would take meetup pics! Sorry if they are not up to the current standard, I stayed in my spot most of the night talking with the lovely and interesting people at my table. So, Kumoricon is coming up this weekend, and I'm looking for some recommendations of good sushi/noodle/Japanese-in-general restaurants around the Vancouver area, preferably within walking distance from the convention center in Vancouver, but possibly 5-10 min. driving distance if need be.

Restaurants should be non-expensive, seeing as my friends and I will be spending lots of money on kawai plushies and prints =3

I got BURNED BAD last time I took my car in to get looked at. Where is a good/honest auto place that is not too far out?? Cheaper is better, but trustworthy is best.

Thanks in advance!! *thinks its the solenoid*

Does anyone in this community play the CCG "The Spoils"? I was at PAX last weekend where I acquired 84 packs of it, but I don't play it and I spend enough money on magic the gathering already that I don't want to start another CCG. I am looking to get two bucks a pack for them, and thought I would see if anyone here wanted them before I tried ebay/craigslist. The packs are pretty evenly divided between first edition and first edition part 2.

P.S. Ira Glass' booking agent is steven@barclayagency.com just in case, you know, you want to send him an e-mail or something.

I just received this e-mail:

Ira Glass has asked OPB to find an alternate space for his lecture event
and they are working on this today. Thank you for your email

This website/link below claims if you give them $15.00 they will not only reduce the amount of junk mail you get by post up to 90%, but they will also plant 10 trees.

I am not certain of the legitimacy, but less spam and the saving of more trees is pretty keen to me.
Just passing it along =)

synthcat I stumbled upon a link for you: http://www.greendrinks.org/
the premise is Every month people who work in the environmental field meet up for a beer at informal sessions known as Green Drinks.

We have a lively mixture of people from NGOs, academia, government and business. Come along and you'll be made welcome. Just say, "are you green?" and we will look after you and introduce you to whoever is there.It's a great way of catching up with people you know and also for making new contacts. Everyone invites someone else along, so there’s always a different crowd, making Green Drinks an organic, self-organizing network.

...of course there is a Portland location =)

So I need to know where I could shop for some nice clothes for interviews. I have always just worked with what I have but since I am trying to find a job that is not in food service, I need to find something more professional and nice looking. Maybe a nice skirt and blouse and jacket...a suit essentially. Where could I find this without going completely broke?

Any other DP people participating in the Bike Commute Challenge? It's a pretty cool little contest. Here's a blurb from the site:

"The Bike Commute Challenge is a friendly competition - workplace against workplace - to see who can get more people biking to work in September. Any business, non-profit or public agency is eligible to participate - and individual cyclists can also participate on their own. Businesses and non-profits compete in one category, while public agencies and bike shops each compete in a category of their own. Within those categories, workplaces are divided by number of employees, to keep competition fair."

Check it out if you like. I'll be participating with my company BDC Distribution. Here's the site.

Back at the May meetup I brought my Polaroid camera. I remembered that now that my scanner is working again I could scan in some of the pictures. So, for your enjoyment, the May 22, 2007 meetup shots. 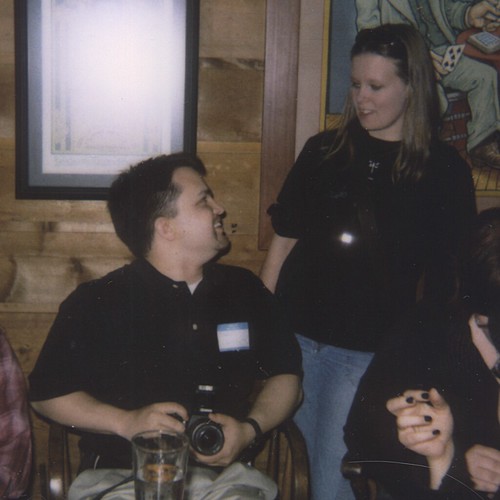 Oh wise Portlanders who know everything! I have just been given a moderate amount of money by the people who ran into my car. The insurance estimate was based on the need to replace

1: the hood panel, because it is bent and scratched

2: everything around it (12 pieces including headlights), to achieve a good color blend.

Now, seeing that half of the city drives around in cars that are much more beaten up, I doubt the need for part (2). I would rather keep part of the money, and have part (1) cheaply done.

Can anyone, please, recommend me a cheap auto body shop, somewhere around Beaverton, where they would do a reasonable job on the hood panel replacement, charge appreciably less than 1400, and leave the rest alone?

I work in the drug & alcohol field, and when this article (well, not this exact article, but generally the same info) was discussed in our staff mtg. the other day, I found it quite interesting:

OSU scientists need just a teaspoon of urine to drug-test entire city
tl;dr OSU is testing sewage in the city to detect drug use habits, which helps law enforcement concentrate in specific neighborhoods.

Nice meeting/seeing you guys last night! Hopefully the booze washed out of your shirts from all of the spillage...;)

FYI to anyone following the issue that someone posted about earlier (the issue being Ira Glass hosting an OPB fundraiser at an anti-gay church)... I emailed his agent earlier today, presumably along with several other people, and after I'd initially received only a perfuctory reply, this just landed in my inbox:

Ira Glass has asked OPB to find an alternate space for his lecture event and they are working on this today. Thank you for your email.

yay for him and us.


Best one so far:

Compare rents in your neighborhood.

http://www.rentometer.com/
http://www.earthalbum.com is loads of fun. it's a mashup of googlemaps and flickr, I think... you fly around the map and pick countries, and it shows you in order of popularity photos from that country. saudi architecture! plants of antarctica! this place in sri lanka! socks of oregon!

does anyone have ideas on where i might find a dirt-cheap yet functional record player? preferably as old as possible. i don't know the format very well, so i just want a little system to listen to old, old records on.

i've looked through craigslist, but i was wondering if any of you had any gems of wisdom to share...

EDIT: CLICK THE LINK YOU CRAZIES. I'm selling the 360 with an extra controller and a Quick Charge Kit, for an extra $70 value. RECOGNIZE.


I have my doubts, but my friend doesn't, and he's no dummy. He's an authority in this field, and says if I really want to encounter Sasquatch, I should go out alone to camp overnight in one of the "hotspots" near Portland. That way, I'll dramatically increase my chances of encountering Sasquatch, which almost always amounts to hearing them calling, tree-knocking, or somehow emitting low-frequency droning sounds. If it's true they have perceptive abilities far beyond ours, and are less threatened by single (not two) men, or if the person is with children and/or open-minded females, as my friend believes, you might help me encounter Sasquatch. I am not a wacko. In fact, you'll have the chance to judge for yourself, as we'll have to meet about a week ahead of time to see if we're really on the same page about this.

Anyone ever been to this?  Is it as awesome as it sounds?

Right after I posted "Found Dog" listings all over the internet, I started searching the lost dog listings on Craigslist and there he was!

His mom just picked him up from my house.


We found this tiny adorable male dog wandering around at Woodstock Park this evening. No tags.

I know it's a long shot, but I thought I'd post his photo here and see if anyone recognized him.

We're also posting to Craigslist, putting up flyers and will be taking him to a nearby vet in the morning to see if he has a chip.

If no one claims him, we're going to take him to the Humane Society. He is in love with my pug, but unfortunately the pug is not so fond of him.

I was wondering if any of you out there have ever had mild to moderate acne scarring removed/repaired/improved by the new fangled laser techniques?

I am curious about it and so would love any information any of you brilliant folks may have in regards to such a procedure.

I will be seeing my dermatologist soon and will discuss it with him, but until then I wanted to know if anyone has had any experience with this.

Finally, an answer to that age-old question -- who has more valuable feces: David Lee Roth, or Michael Stipe?

And, how much for some of Billy Corgan's bacteria, anyway?
Collapse