I know that hockey schedules usually come out within the next two months, but I was wondering if anyone had a more specific date for when the Winterhawks schedule will come out. I'm trying to plan a few games out in order to take some friends and teach them about hockey.

I went to Troutdale today.
And me and my companion were both very hungry by that point, having had a trip on the 77 that was longer than expected.
And so, we got off the bus, and found to our surprise, there was a restaurant right in front of us. A restaurant that I found, to my happiness, had a nice vegan meal. Although it had too much celery in it.

But still no word on the burritos.

can i just say how much i love the kindness of strangers in this town? today was a really rough day for me and so many people i didn't know reached out and helped me. it's so nice knowing i dont live in a city full of jerks.

anyone. thanks to everyone who helped a stranger today. especially if you happen to be anyone that lives around 24th and weidler and helped me today.

and how great are portland cab drivers? my drunk ass nearly started crying about how crappy my day was and the cab driver refused to let me pay.

Since I haven't called anyone who might be going... where and when ARE the best fireworks tomorrow?

May we remember the reasons why the USA and UK have freedom of the press.
Especially on a day like this.

I tried looking in the archives for this, but I couldn't find it when I searched for it.

Is the Mercury going to douse everyone tonight at the fireworks? There was the whole funny mini-column in last week's issue near One day at a Time, but it's nowhere to be found on the website. I have this feeling that they were kidding, but it IS the Mercury after all, so who knows. It'd be worth going and dealing w/ the crowds just to see that happen.

Forgive my ignorance if this has been discussed, I've been away for a bit.

So, I have been curious how many times people push the "walk" button? I know no one I've ever witnessed pushes it only ONCE. I mean, what if it doesn't register? OMG. 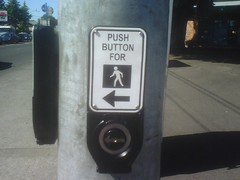 Open to: All, detailed results viewable to: All. Participants: 193

How many times do you push the button?

I was at the grocery store a couple days ago buying beer, when I discovered that my six pack had been mixed. When I notice before checking out, I usually end up back in the beer aisle trying to remove the beer I don't want. It doesn't bother me in the slightest, but I've always refrained from mixing beers on the assumption that it was somehow rude or skeevy. (Not addressing the people who make a big fat mess of the beer shelves while they're mixing, just the mixing itself.)

So I ask you, DP, is it ok to mix different bottles of beer in the same cardboard six pack holder and proceed to the checkout? Is it an acceptable thing to do? Especially if you work in a grocery store, I'd like to hear your opinion. Thanks.

Does anyone know if the liquor stores are open today/if they have special hours?
I called a few, but just got the generic recording of hours for the week.

I kind of assume they will be open, but ya never know.

Do any of you remember this?

Do you know the purpose of this televised enigma (to me)?

Hey...if you are bored on this day,stuck at work or not feeling the love,heres a game of sorts.

You get a word and place that word within a sentance,not neccasarily as it's said.

Oh there are no prizes,the more cleverer the better anything to make others think!

If this sounds like your dog, or a dog you know, *please* contact Laurelwood ASAP. Also posted in Lost/Found on craigslist.

Found tonight about 6 pm. Wire haired black female (schnauzer cross?), about 50 pounds with white patch on chest, looks like she might be nursing puppies. Found near 42nd and NE Sandy. Wearing black nylon collar with no tags. Server from Laurelwood Brewing Co. took her to get water, call them at 503.282.0622.
Collapse