Okay. So I have a crap-ton of empty CD cases and to the best of my knowledge they aren't recyclable. I really don't want to just throw them all out, but I don't know what else to do with them. Any ideas/suggestions? Or does anyone need a bunch of empty CD cases? (Most of them aren't the slim kind).

So I have decided to plunk my ass at Fireside and do homework until the morning busses come. I've only been here an hour and it already blows (Though I'm getting stuff done, so y'know). If anybody just crazily was planning to frequent Fireside sometime tonight, relieve my tedium and say hello. I am the dude with pink hair.

Does anyone know where I can get good reusable grocery bags online? The canvas kind? I tried eBay but they were quite expensive there.

My younger sisters both love Jalapeño poppers, especially the kind with nacho cheese. The one place they knew that had them closed a few years ago. Does anyone know of any other place in the area that has them? I'm guessing it might be a bar, but no matter if it's a bar a restaurant.

I haven't posted for a while, so I thought I would ask a question that has puzzled me for a while.

Why is crack so addictive? What is the high like that people go so crazy for it?

I haven't really used hard drugs, but I think I have some idea of what they are like. I have used mild opiates, so I just imagine the feeling of painlessness and worrylessness amplified. I imagine a heroin user feels a little bit like they are going to sleep after a very large meal, with not a care in the world. And I haven't used amphetamines, but I understand the appeal is feeling like everything in the world is exciting and you are full of energy and invincible...so I understand how those are addictive to people.

But what is smoking crack like that it makes people into crackheads?

ok can someone here explain the point of a filibuster to me? i know they keep things going so that people arent voting on something, but what does more time get them? why does this help anything?

Anyone want to go see Cornelius tomorrow with me at the Wonder Ballroom?

Here's a brief write-up about them and their awesomeness in the Mercury.

It's only fifteen dollars.

Have a wonderful, festive Planet Earth Day everyone! What are dp-ers' plans for today (mine involves Pinot Pedal event in couple of hours....)?

In Rome I recently spotted an Italian edition of Chuck Palahniuk's book about Portland. It was originally published as "Fugitives and Refugees: A Walk in Portland, Oregon"--with a boring cover. This is a better cover graphic...it makes P-town seem much more interesting! 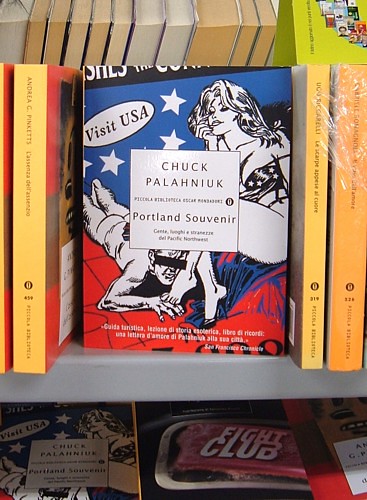 (Am I the only lazy, lame ass sitting at home today in front of the computer?)

You guys. Look at your AIM buddy list right now.

Chuck Palahniuk
Wednesday the 2nd of May, 7:00PM Bagdad Theater

Chuck Palahniuk Rant, the new novel from Fight Club author Chuck Palahniuk, takes the form of a (fictional) oral history of Buster "Rant" Casey, in which an assortment of friends, enemies, admirers, detractors, and relations have their say on this evil character, who may or may not be the most efficient serial killer of our time. Expect hilarity, horror, and blazing insight into the desperate and surreal contemporary human condition as only Palahniuk can deliver it. Please note: This event will be held at the Bagdad Theater, 3702 SE Hawthorne Blvd. Tickets, $24.95, include admission and a copy of Rant, and are available at the Bagdad Theater box office and all Ticketmaster outlets. Books will be distributed at the event.

two couches, a slipcover, and an armchair: http://portland.craigslist.org/mlt/fur/316804627.html

My anxiety is starting to take over my life. In a negative way. Does anyone know of any centers in Portland that can help me? Possibly one that I can check into?

Anybody want a free basic social ballroom lesson? Want a killer deal on your first couple of lessons at one of the best dance studios in Portland? April 24th is the open-house champagne dance party (open to couples and singles) at Arthur Murray studios in Portland (2526 NE Broadway). Drop me a line and I'll let you know the details.

So I nanny for a 3 year old girl and a 5 year old girl three times a week on Monday, Wednesday, and Friday between 1 and 5 pm.  I'm starting to run out of fun things to do with them--there are only so many times you can go to the zoo and OMSI (the family has memberships).  We go to the park, we go to the library, we hang around the house and do art projects.  Does anyone know of any other fun activities that go on around town during those time periods that we could visit?  Or have any other brilliant ideas?  I don't have a car, so we bus around when we go places.  Thanks!

Jascha Ephraim is looking for a few musicians to play a show at the Renn Fayre at Reed College. Here is the information:

The Jascha Ephraim Memorial Library is coming from San Francisco to play at Reed College's Renn Fayre. I need a violinist, a violist, a cellist, and an electric bass player for the show.

The music is written out clearly and parts can be e-mailed to you asap. We'll have one long rehearsal on Friday 4/27, then play the show at 6:30 on Saturday 4/28. Everyone will be paid $60 at the end of the show.

Since we will only have one rehearsal and the music can be challenging, you MUST be able to sight-read accurately and have good intonation! Working musicians with classical training or equivalent ability preferred.

It's a fun group with sweet people and fun music and everyone has a real good time. And we'll all get passes to the weekend-long festival at Reed.

It's coming up soon so please reply as soon as possible if you're interested! Thank you--

Using one form of discrimination to combat another is not a good remedy.

Whatever. I'll just add these restaurants to ones I won't give my money to. Idiots.
just a heads up. My roommate is moving out and the other is taking a trip across the country and upon returning moving to Germany. Sucks for me huh?

anyways. I need to start figuring out what to do. I'm a pretty cool guy with a little Maltese. If you hear of any rooms or apartments opening up in the South East could you shoot me a heads up...Thanks in advance

Why are clove cigarettes better/worse than regular cigarettes [like Marbs]?

I figured I asked since we discussed crack earlier today...
Collapse